Latest headlines
KKY, as usually called by his fans, does not only possess indelible track records and success stories in countless files at the world stage, he also possess the leadership charisma and patriotic commitment most needed to retrack our derailed and futureless Sierra Leone.

Few days ago, KKY began showcasing his readiness and competence to lead a broken nation like Sierra Leone to sustainable recovery and economic prosperity. Unlike those who usually publish unnecessary press releases for children’s birthdays and hikes in the forests, KKY, without raising any dust in the media, embarked on a five nation tour visiting governments, institutions and energy projects he formulated and implemented over the years. The tour began in Senegal, to Cape Verde, Ivory Coast and then his beloved Sierra Leone.

In Cape Verde, KKY and Mr. Mohammed Ibn Chambas, United Nations Secretary General’s Special Representative for West Africa on Security Matters, met with the President and cabinet, and spent a day at the ECOWAS Center for Renewable Energy and Energy Efficiency. The center was designed and created by KKY and Mohamed Chambas 7 years ago with funding and support from Spanish and Austria governments.

The center now receives support in millions of dollars per year from seven other donors, and will be a center of excellence to support the spread of renewable energy in West Africa. It’s reported that 97% of Cape Verdeans, due to committed and honest leadership, have gained access to mixed renewable energy, ranging from wind, solar and hydropower. 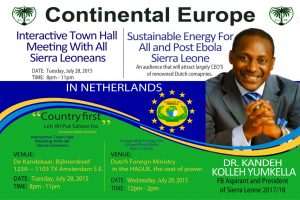 In addition to the above, the Sierra Leonean communities in continental  Europe, particularly  Germany, Holland, France and UK, are presently yearning for KKY to visit their respective countries to enable them pledge to him their loyalty and commitment to support his candidature.

On Tuesday, 28 July, KKY will be a guest speaker at an interactive town hall meeting with all Sierra Leoneans in Amsterdam; on Wednesday, 29th July, he will be hosted by the Dutch Ministry of Foreign Affairs in the Hague (the seat of power) where he will speak on Sustainable Energy for all and post Ebola Sierra Leone; and on Saturday August 1st, KKY will have a special grill session in Munich, Germany with Sierra Leonean community in Germany.

The nobleman does not depend on ethnic identity in his campaign for SLPP flag and Sierra Leonean presidency; he does not depend on unfulfillable promises; he builds Institutions, mobilizes global funding and delivers sustainable solutions to acute socioeconomic problems such as power shortage, which is responsible for the retrogression of almost every country in Sub-Sahara Africa.

This is why KKY has been nominated to receive the prestigious “Paul Harris Fellow” Award from Rotary International for his commitment and service to the world, and his country.

Last week, the Austrian government also announced that the President of the Republic has approved one of the highest national awards to be presented to KKY for his global leadership and support to Austria. 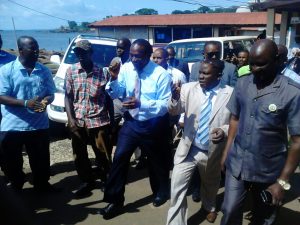 “Leh we de go normor“ was his quiet and peaceful answer when I asked him late last year about his membership of SLPP which is though trivial but only point evangelized against him by his detractors.

The nobleman is currently facing a great challenge from misguided individuals who want to hijack the political power in Sierra Leone using their tribal and ethnic identity. They are simply scared of his taintless and unchallengeable curriculum vitae, as they view him as a sweeping broom that might leave them with no share on the political drawing board.  I have hardly met KKY in person and I’m neither excited about his diplomatic status nor am I fascinated by his handsome appearance. What I believe in however, is his capability and commitment to reverse the ugly socioeconomic mishap in post-colonial, post-war and post-Ebola Sierra Leone.  His past and existing impacts in the world stage is a glaring example of his ability to deliver his promises. To put that simple for the layman to understand, KKY is highly experienced, academically fit, diplomatically welcomed, ethnically and regionally placed to cause an everlasting U-turn in the Sierra Leonean political landscape.  To reject such a great fortune for an opposition party like SLPP due to individual thirst for political compensations, ethnic ego and regional identity, would only be a hit below the belts of those who are working tirelessly to reunify the party after protracted disunity.

The greatest absurdity is that most of KKY's detractors neither possess authentic voter IDs nor SLPP membership cards.  What they are failing to realize is that democratic elections are not won by baseless propagandas in the cyber space, it is number that matters. As an opposition, every individual you lose would be a nail in your coffin.

Though we can’t predict tomorrow, but KKY is the best answer for SLPP today. And only misguided campaigners who have bees in their bonnets for ethnic and regional based politics  are ignoring that fact.