Latest headlines
The following are 4 reasons why this Huffington Post article on female circumcision, misnomered as Female Genital Mutilation by opponents, making its rounds on Sierra Leone listservs and social media over the last week is flawed, misleading and terribly insensitive to the Ebola Crisis that is facing the country at the moment:

1. General Ban on Public Gatherings: To my knowledge there has been a general ban on all activities that can exacerbate the spread of the Ebola virus in the country: i.e. public gatherings, dances, ceremonial practices and especially traditional circumcisions – female and male – that involve exposure to bodily fluids such as blood, which is a major mode of transmission of this deadly virus.  Traditional female circumcision practices are no exception to this important rule and are not targeted in isolation of other activities and practices that could endanger people’s lives during this time of crisis.

2. No MOU Exists in SL: To my knowledge, the assertion that an MOU was “signed” by Soweis to forbid the circumcision of girls under 18 is a myth perpetrated by the media and activist organizations.  Further, the notion that “600” girls were “spared” female circumcision as a result of this intervention is another media/activist claim that is completely unsubstantiated.

3. Female Circumcision in SL is not about Virginity:  That female circumcision is performed on girls in Sierra Leone to maintain virginity and fidelity in marriage is completely false and contrary to the actual meanings of this practice and its parallel with male circumcision.  Ideals about virginity, chastity and fidelity may be associated with more invasive forms of female circumcision, such as infibulation (WHO TYPE III) in predominantly Muslim populations on the horn of Africa, but they are not the main focus of less invasive excision (WHO TYPE II) procedures performed in Sierra Leone.  Both female and male circumcision are connected with ideas about the creation of sex and gender and both are required by ethnic groups that uphold these practices as important transitions to adulthood and marriage. 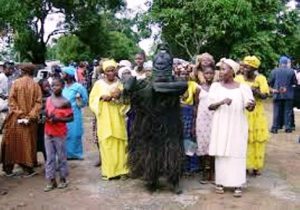 Anti-FGM Activists and Financial Gain in Propaganda: The purpose of this kind of propaganda (i.e. sensationalist assertions that have no basis in fact) that is being promulgated by activists and the western media is to solicit more and more money for the activists themselves to supposedly implement so-called anti-FGM campaigns.  These expensive and denigrating media campaigns have become a burgeoning multi-million dollar industry that, like all lucrative enterprises, everybody wants in on.  On a topic like FGM, where there is no fact-checking or critical thinking involved, the more outrageous and horrific the claims, the greater the chances for attention.  When these terrific yet unsubstantiated claims are matched with a false message that change is occurring (but make sure you never show any proof of this) and that a specific method or program is making progress in defeating the problem, the more likely it is for activists to milk generous funds from media audiences who are not exposed to any kind of balanced debate and critical discussions of the alleged problem.

Unicef knows better than this.  In its own 2013 special report on FGC/M (albeit efforts to dress up the dismal facts), it was clear that there was very little change in practices of female circumcision in sub-Sahara Africa.  The organization that Unicef generously sponsored and promoted, TOSTAN, failed dismally in Senegal where despite the amount of money and media attention around its “abandonment” efforts, virtually no change was recorded in this region with regard to the prevalence and support of female circumcision.  In fact, the only two countries that reported the most significant changes, Central African Republic (CAR) and Kenya, had no previous intervention from anti-FGM activists in the first case and in the second, change cannot be linked to modern anti-FGM campaigning that began in the 1980s.

The point here is clear: Unicef is enabling the activists who shape the misguided anti-FGM policies of this otherwise notable institution to capitalize on the generous Ebola money coming into Sierra Leone.  Hello…?  Ebola is not bringing an end to female circumcision in Sierra Leone but is likely providing financial opportunity for anti-FGM activists. As the Sowei mentioned in the article noted, things will go back to normal when the crisis is over.  They did after the protracted war in Sierra Leone, much to the shock and dismay of anti-FGM activists.  Ebola is virtually under control in neighboring Guinea and Liberia – has female circumcision ended in these two countries?

With the country mourning and suffering the loss of so many prominent doctors, nurses and other healthcare personnel to Ebola, I would think that Unicef and so-called anti-FGM activists would allow us this time to heal as a nation and work together to end the real scourge that is costing us the lives of our loved ones, our fellow citizens and the best of our health care officials.

So, Unicef (and the journalists who print anti-FGM propaganda without fact-checking), please leave Ebola funds for the sick and dying and those who are risking their lives to care for them and send your anti-FGM activists packing to some other supposed misogynist third world country in need of western feminist salvation.  Remain as part of the solution instead of allowing this commendable global institution to be used to further divisiveness in our communities at this hour of our country’s public health catastrophe.

For readers who are looking for more balanced information on evidence based research concerning Female Circumcision, please refer to the Public Policy Advisory on Female Genital Surgeries in Africa, The Hastings Center Report, Nov/Dec 2012 or contact me below: