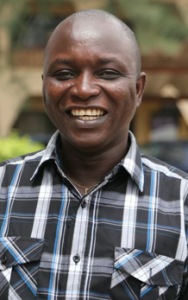 Dr Khan, one of the herosEbola has proved to be the most dreadful virus on our planet and it has swept countless number of good people across the Manor River Union. So far, all researches leading to its actual origin are only based on conjectures and fairy tales which makes it difficult, if not impossible, for world scientists to find a true cure or vaccine against it.

The Kenema Government Hospital (KGH) earlier served as the main battle ground where professional medics like doctors Khan, Rogers and their nurses were arm-twisted by the virus to drop down their weapons and lick the ground in the name of patriotism. They were exposed to die defending a nation abandoned by those who were blinded by selfishness, greed and political ambition.   If I were one of the survivors who are still assigned at KGH, I would only redouble my effort to fight the virus till I claim a victory so that the soul of Khan, Rogers and all the dozens of nurses who have succumbed to it would rest in peace.  The war on Ebola shouldn’t be really focussed on money anymore; it’s about saving a nation, perhaps the whole world. If anyone had downplayed Ebola based on political interest, posterity shall surely tell on him/her. The blood and soul of those who are now dying in their dozens on a daily basis shall surely turn into a powerful weapon that shall bring them down onto their knees.  And if anyone is playing game with dead bodies at the KGH in order to keep his own pot boiling, the bloods of Khan and Rogers shall surely fight him/her. 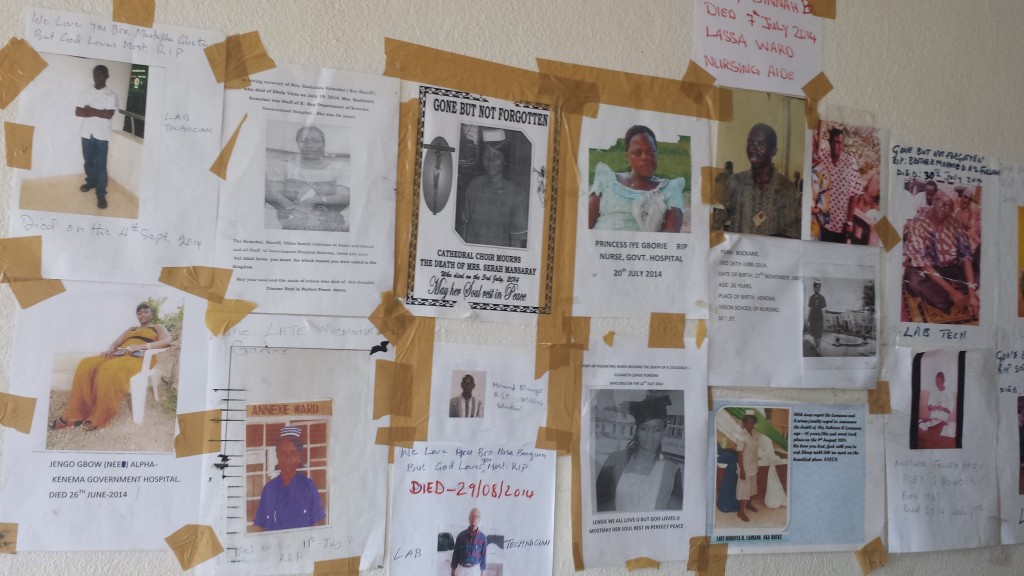 Photographs of Nurses Claimed By Ebola Displayed On a Wall at the Kenema Government Hospital It’s no secret that our central government is riddled of corruption, but some professional medics who are posing to be the Generals and Platoon Commanders in the fight against Ebola are more corrupt than any civil servant in Freetown. They have taken advantage of their profession to hold the nation at ransom.  They have taken advantage of the government’s impotence and ineptitude to monitor/verify them during this very trial moment in our country’s history. Many people think the medics are just displaying dead bodies at the Kenema Government Hospital in reaction of government’s failure to pay them on time.  But our careful investigation into the matter has proved that there is more to it.  We have learned that there are people behind the scene who are trying to blow the war on Ebola out of proportion because of selfish reasons.

Do we really think the central government is doing business as usual, withholding payments for the medics at this very crucial time, without any good reason? Have we ever asked ourselves, in the first place, where is the money coming from?  Can we start imagining the fight against Ebola like a real project funded by western donors with many strings of transparency and accountability attached to it?  If NO, then it’s high time we start thinking along that line.

Apart from individual donations directly collected by the government, it’s high time we accept the fact that the Sierra Leone government is poor and cannot pay anti-Ebola fighters with money from its own coffer on weekly basis. It’s high time we know that the money disbursed to everyone participating in the war on Ebola is coming from taxpayer’s pockets in the western world. Therefore, some amount of transparency and accountability needs to be maintained in the process.

Our investigations have proved that the western donors are now demanding more accountability from all governments in the Ebola affected region. The donors had earlier honoured the initial budgets and vouchers submitted to them without verification as if they were drunk.  But as time goes by, they have started demanding more scrutiny.  The governments then resorted to instructing their finance departments to start following the pay masters in the hospitals in order to ascertain that the donor funds are paid to real anti-Ebola fighters.

“When everyone was paralysed by the outbreak at the initial stage, payments were effected based on figures, but we now want real names represented by people. In fact, the Ebola allowances are very huge, if possible, they should be paid into individual accounts.  Money is no water from the ground; it’s no leaf from the tree; it’s no stone; it’s life security”,   said a diplomat during privilege conversation at one of the bars along Aberdeen beach in Freetown.  This seemed offensive to many professional medics who have been championing the payment process.

The Kenema District Medical Officer, who by default, is in charged the KGH, seemed to be more notorious in the messy game than any other medics.  We have proved that the voucher presented by the hospital contains almost every name in the district and it demands about a billion Leone every week.  Names such as Abu Samuka, Samuka Abu, Theresa Mansaray, Mansaray Theresa, could actually be (only) two people in normal scenario.  Unfortunately they are now paid as four different people in the Ebola voucher. When the government refuses to effect payment on such vouchers, the righteous who are working 24/7 to fight Ebola would end up suffering for the wicked who doesn’t even exist.

“I have talked but failed to convince the government verifiers, if you can’t receive your weekly allowance upfront to feed your family, you know what to do”, was heard from a very senior authority at the KGH, telling frustrated burier team members. And 24 hours later, there was a strike action by the junior staff, including display of dead bodies.

While the Ebola war continues, we think the best way the government can clean up the KGH voucher and avoid such a stalemate in the payment process is to reassign some of the senior staff, particularly the DMO.  If Kenema is a success story in the fight against Ebola, the manner and methods used should be replicated in other parts of the country, hence the necessity for the DMO to be reassigned so that he can teach his colleagues in other parts of the country.