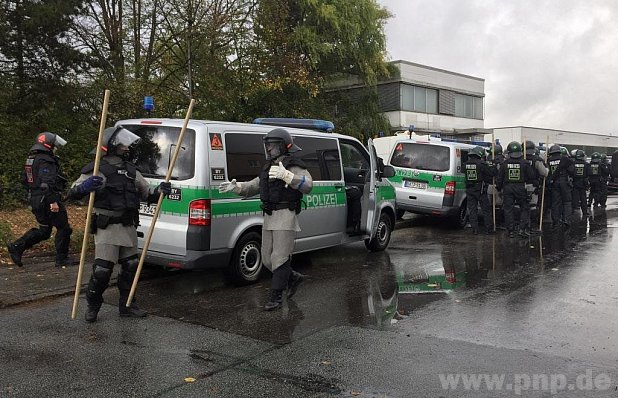 On Wednesday afternoon, a large police operation took place at the branch office of the temporl asylum camp Deggendorf in the Plattling-Stephansposching industrial area. This was triggered by a failed police mission in the morning, during which an asylum seeker from Sierra Leone was to be taken into deportation custody. The standoff attracted the intervention of the special police forces. In the meantime even the A92 between the Plattling-Nord and Plattling-West junctions was completely closed. This was to prevent people from walking onto the motorway.

According to police reports, the 25-year-old asylum seeker from Sierra Leone (name undisclosed) was to be taken into custody. His transfer to Italy had been ordered under the Dublin III Regulation which forces asylum seekers to remain wherever they first landed within th EU region. The Sierra Leonean is believed to had first landed in Italy. But the man could not be found according to the police. Several Nigerians who had not been affected had then decided to disrupt the mission verbally. The spokesman for the group – a 29-year-old man – struck several times against furniture, knocked over chairs, and tried to physically challenge policemen. Despite fierce opposition, the Nigerian was taken into custody and taken into a service vehicle. A large number of other asylum seekers then followed the officials to the police car. They tried to prevent the police from driving away with the Nigerian by even blocking the temporal fence. When the officers cleared the entrance to the asylum center, the 29-year-old fled from the police car and his whereabout is yet unknown.

According to the police, the situation was delicate. The security guards then left the facility and the atmosphere was “relatively aggressive”, according to Johann Lankes, press spokesman for the police headquarters in Lower Bavaria. Policemen had been physically attacked which led them to withdrew. During the subsequent large-scale operation, the 29-year-old Nigerian was arrested in the afternoon in the vicinity of the asylum camp without resistance.

It is “unknown” where the man from Sierra Leone is currently staying. This is what Johann Lankes, press spokesman of the Lower Bavaria Police Headquarters said. Lankes justified the large number of local police forces by saying that he wanted to “show presence”. Also, it could not be dissociated with the fact that the officers could be threatened with knives or dangerous objects. Günther Tomaschko, a ploice offcier said: “You never know what awaits you in the shelter. If you go to the shelter with only a few people, the danger may be greater for your own officers and we want to avoid that”.

After first report on the spot, the police secured the accommodation from all sides during their large-scale operation. Police officers also stood on the hard shoulder of the A92 motorway. Hundreds of police officers were on the scene. Some officers – equipped with helmets and protectors and with dogs – entered the shelter calmly and orderly. They were also supported by Special Forces from Nuremberg and Bamberg. Among other things, the policemen were equipped with long sticks. According to Stefan Gaisbauer, press officer of the police headquarters of Lower Bavaria, these poles serve to keep people at a distance. The standoff ended at 17:30 with no report of harm.

According to police, the 25-year-old man from Sierra Leone, who was to be taken into deportation custody, has not yet been found. Instead, the police scrutinized the personal details of 41 persons. 14 persons were temporarily arrested. Two men arrested in the morning are being investigated on charges of preaching peace and obstructing police operations. The third man arrested in the morning – a 23-year-old asylum seeker from Nigeria – has been submitted to the Deggendorf District Court by the government of Lower Bavaria.