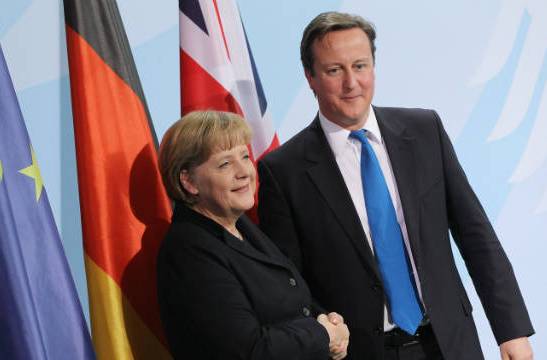 Britain's David Cameron and Germany's Angela Merkel restated their commitment to a strong Europe Friday, as they sought to show a united front in the face of Europe's debt crisis.

Their talks in Berlin come amid tensions between the two nations over how to restore financial stability in Europe. "The United Kingdom has a great interest, and very sensibly so, in seeing the eurozone being strong," Merkel said.

While Britain has some differences of opinion with Germany over the EU treaty and ways to boost competitiveness, she said, the two countries are tied by "strong bonds of friendship."

Both will work closely together ahead of a meeting of European leaders next month, she said.  Britain is the biggest economy in Europe outside the 17-nation eurozone, which uses the euro as its currency, while Germany is the economic powerhouse within it.

The pair have not always agreed on the best ways to tackle the current debt crisis, which has seen attention focused on Italy and Greece in recent weeks.

Senior members of Cameron's Conservative Party have been calling for more powers to be brought back to Britain from Europe, as EU treaty changes are made to ensure economic stability.

Cameron, who has previously expressed concern that Europe's difficulties are affecting Britain's economic recovery, also downplayed divisions between the countries as he stood alongside Merkel.

"We have had a very good discussion between very good friends," he said. "There are many things on which we are in absolute agreement."

However they have not made progress on plans for a European financial transactions tax, Merkel acknowledged. Britain opposes such a tax, fearing it could disadvantage London as a global financial center.

Cameron called for the deal reached at a summit in Europe on October 27 to be implemented as soon as possible.

The plan includes a series of measures to address the crisis, including debt relief for Greece, new capital requirements for banks and plans to build a financial "firewall" around vulnerable euro area economies.

"A strong, successful and stable eurozone is in all our interests," Cameron said. "We need this crisis to be resolved. Britain, like Germany, has a big national interest in that happening."

And while the two do not agree on all matters, they can discuss and accommodate each other's views, he said.

Global markets have been volatile, as political turmoil linked to the financial crisis has forced a change of government in both Greece and Italy in the past week.