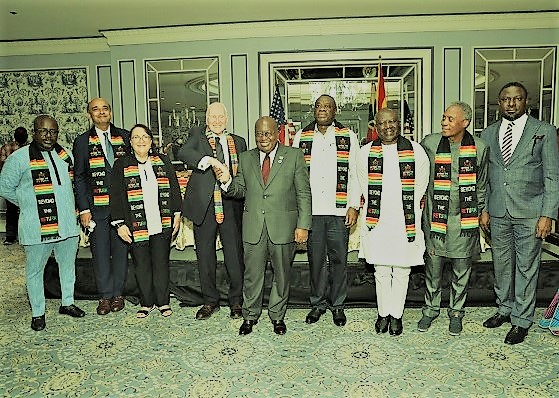 The W.E.B. Du Bois Museum Complex partnership with the Ghanaian government was initiated by President Nana Dankwah Akufo-Addo two years ago during a trip in New York to promote “The Year of Return.”

Monday’s partnership agreement will transform the current W.E.B. DU Bois Center and burial site into a “compelling world class state of the art museum” for researchers and tourists

Introducing Ghanaian President Nana Dankwah Akufo-Addo Minister of Tourism, Arts & Culture, Dr. Ibrahim Mohammed Awal said “We are very happy today because we are quite determined as a nation to make Ghana the Mecca of tourism… in the world.”

Adding, if he were to write a book about the president and to write a chapter it would read “This is a man who have devoted his own life transforming Ghana into an African power house creating wealth for the people making Ghanaians and Africans proud.”

In his brief two and half minute remarks President Akufo-Ado said “I think all of us here are aware of what we about to do.  About 60 years ago, W.E.B. DuBois became a citizen of our country on the invitation of our president Kwame Nkrumah.”

He said as a result of his stay in Ghana “A complex has been developed in his memory which is become a cycle pilgrimage for people interested in the development of the African peoples across the world.

He alluded to when he was approached by two W.E.B. Du Bois Foundation board members to transform Du Bois Center into a museum,

“So, two years ago I came here in New York and was hosted to lunch which Harvard University Prof. Henry Louis Gates, Jr., and Prof. Dr. Kwame Anthony Appiah, a faculty member of New York University – two board members of the W.E.B. Dubois Foundation brought forth the idea that they believe they were capable of making significant investment in expanding the Dubois Centers in Ghana making it something quite compelling as a place of research, a place of tourism would I be able to assist?” President Akufo-Addo said

“I said why not we have it already it is part of our history and if there is opportunity now also to expand his presence in our lives, I had very little difficulty in accepting the idea.  And as a result of that is what we are having here today .I want to thank all of you very much for taking time to be with us here today,”