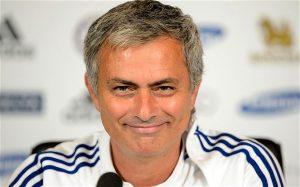 What used to be the exception is now becoming a norm; Chelsea losing match after match on a weekly basis. Every defeat is followed by the mantra; “the players are fully behind Mourhino”. This is now beginning to sound like a broken record. Every time the club comes out to say that “the players are behind the manager”, you get the feeling that this is the exact opposite. If not, why the need for such re-assurance? What the Chelsea fans are seeing week in week out does not look like a team that is behind their manager. The litany of excuses can be suggestive of a club that is caught between the devil and the deep blue sea; to sack or not to sack Mourhino. It looks like at the moment, the club is going with “the devil you know….” But there is no hiding from the fact that Chelsea are in deep trouble.

The prospect of Chelsea being relegated is unthinkable at the moment, but if the Premier League table is anything to go by, Chelsea is in the relegation zone. After 12 games, Chelsea have lost 7, won 3 and drawn 2, and in my book, that is relegation form. Other managers have lost their jobs for lesser crimes against humanity. One of the brightest prospects in management Garry Monk at Swansea is on the brink of getting the sack, just for committing the original sin, while Mourhino seems to have escaped capital punishment. It sounds like history and reputation are the only saving grace for Mourhino at the moment. But how long the patience will last is another matter.

Chelsea have earned a lot of air time and reams upon reams of coverage on the back pages of the red rags. But much of the press coverage has not been about the players or their performance on the pitch, but one man, and one man only: Mourhino. To say that Mourhino has become an embarrassment to the club might sound like an understatement. His off field antics have been an unwelcome distraction by any standard, and it all started with his public rant at the club medics for doing their job. He has since lurched from one controversy to another. He seems to have set up a standing order or direct debit with the FA, as he totes fine after fine for his public rants. With Chelsea tottering on the precipice of relegation, how do you solve a problem called Mourhino?

For starters, he should be re-christened. He is no longer “the special one”. Mourhino may be the manna of every football writer’s dream, but his antics and one-man comedy club is no longer a laughing matter for the oligarchs at Stamford Bridge. If Chelsea are to climb out of their slumber, the club should make Mourhino take the 5th Amendment and ban him from all football press conferences for at least a year. No manager likes to lose a football match, but Mourhino is a bad loser, and has never been graceful in defeat. He has never accorded credit to the opposition when he has lost a match. He has never passed up on the opportunity to blame the referees, the FA, and even the colour of the grass when he has lost a match. That in itself is not in the spirit of the game, and can only be described as undignified.

I predicted in my last piece that it was only a matter of time before one player breaks ranks and spill the beans on the goings on in the dressing room. Last week, one player allegedly attempted to do just that, with press reports stating that one player would rather lose than winning a game for Mourhino. The club was quick to quash this as just another rumour. The seasoned fan knows that a toad does not run in the daytime for nothing; and that if a blind man threatens you with a stone, he must have stepped on one.

Mourhino has been credited as one of the best managers in the world. It is very difficult to argue with that. Mourhino’s greatness has only been measured around the pre-condition that the clubs he has managed, with the exception of F.C. Porto have all been awash with bottomless pits of money. He has never operated on shoe string budgets. From Chelsea, to Real Madrid, Inter Milan and back to Chelsea, he has had the where withal to splash the cash. He has always had the best name your price players at his disposal. Mourhino has never been known to produce players from the academies of the clubs he has been at.

The last youth player to come from the academy was John Terry; and even that chance was given by Claudio Ranieri, now at Leicester City. Even with their entire state of the art academy, only Kurt Zouma and Loftus Cheek have had a peep at first team action this year. Chelsea has 22 players on loan, the highest and enough to field two full teams. At this rate, you will be tempted to question the essence of Chelsea’s academy. So how great is Mourhino, when he cannot even unearth any gem in his academy? Or take a chance on the youngsters? Perhaps his greatness could only be measured by his ability to have the freedom of the transfer window.

The proof of that notion has been ably demonstrated by the last transfer window. Having won last season’s title, he was not given much for any marquee signing; well except for Pedro who was lured to Chelsea by the bright lights of London. All of a sudden, the wheels seem to be coming off the rails. Any great manager would have gone back to the academy to see if there are any gems locked in their arsenal. Louis Van Gaal may be one of the most stubborn managers there is, but he is showing faith in youths like Jesse Lingard, Paddy Mcnair, and Borthwick-Jackson. With “attack, attack, attack” replacing the “glory, glory man united” chorus from the Old Trafford faithful, you may think that this might not be the best time to lump your faith in the youth. But Lingard has repaid his manager’s faith in him in the last two matches; with one assist in the game against CSKA Moscow and a break the deadlock goal against West Bromwich last Saturday. I am not a fan of Van Gaal’s robotic style of play but I take my hat to him; and that is a mark of great managers.

The last 4 months have seen the image of Chelsea dragged down on the world stage. As a club, Chelsea need to wake up, and wake up fast to the realisation that Mourhino is no longer the “special one”. That what is going on at the club is no longer funny. That Mourhino has lost his entertainment value to the press. That Chelsea is not making new friends, and that the club is in danger of losing the few it has. The reality of a disastrous season is staring right in the face of the club. But for some reason, the club seems to be in denial; as if this is not happening and should not happen to a club with such a stature. The possibility of losing out on Champions League is becoming a reality with each passing weekend. I hope I am wrong. There are some deluded Chelsea fans who might even be thinking that the Premier league table has been turned upside down. It should not happen to a manager like Mourhino. The belief that it is just a matter of time before Mourhino changes the club’s fortunes is understandable. Perhaps the international break will bring in some much needed respite. Only time will tell. But what’s happening at Chelsea is no longer funny, and Mourhino is no longer “the special one”.

Don’t forget to turn the floodlights off before you leave the pitch.