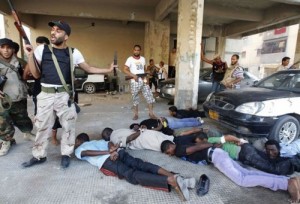 When I wrote an article titled “The unreported world of African Migrants in Post-Gaddaffi Libya” in November last year, little did I know that it will need an enormous effort from an international NGO like Medicines Sans frontier (MSF-Doctors Without Borders), before the world will wake up and smell the coffee about the brutality and human rights abuses that were taken place in the guise of democracy, revolution or downright barbarism. I mentioned in my article that “it is the fate of the ‘foreigners’ in Libya, which as we speak has not attracted the desired attention of the media, especially the international media”.

There is nothing prophetic about this, but it just goes to show that in spite of all the so-called moral high ground that the West seems to portray, there is an economic element locked within the pages of its gospel on democracy and human rights. You did not need to have a brain cell of Einstein’s to predict the outcome and domino effect of the demise of Gaddaffi. Like I mentioned in the article, a significant percentage of the military allegiance to the Late Gaddaffi had been resourced from countries around the western fringes of Africa. Most of these countries which included Niger, Chad, Burkina Faso, Mali, etc. all clamour to maintain patent rights to poverty. So it was easy for the late Gaddaffi to recruit these victims of circumstances into his fold. 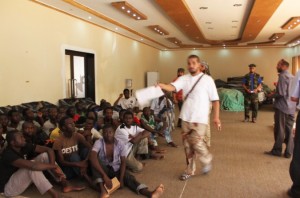 It is an open secret that Libya had over ten playgrounds that were used to train guerrilla fighters, terrorists, and all sorts for domestic and export purposes. While Saif Al-Islam was busy blaming the insurrection and “crimes” on “Africans paid by criminals to kill Libyans”, the Libyan “tweeterazzi” on the other hand was equally pouring scorn that “Gaddaffi was killing us with his Africans”. Set against such a background, it was predictable that the demise of Gaddaffi will result in a field day and carte blanche for mindless reprisals on immigrant or dark skinned Libyans. Caught in this quagmire are the innocent African migrants from places like Guinea, Sierra Leone, Nigeria and Ghana, to name a few that were predominantly in Libya to hustle. Sadly, they are being tarred with the same brush and caught between clan grudges.

There is no doubt that some of these migrants in Libya were there for terrorist purposes. Is it any coincidence that following the demise of Gaddaffi, the attacks by Boko Haram has intensified in Nigeria? The brazen nature, their sophistication and precision have the finger prints of a well organised network with Al-Qaedaic dexterity. As mentioned earlier, some of the training in Libyan was specifically for export purposes. Notwithstanding the terrorist threats, the likelihood is that most of the missing or stolen weapons from the Libyan arsenals have found their way to the sub region and other merchants of death. It is reported that the trials for these suspected fighters have been painfully slow. As a “goodwill” gesture, the National Transitional Council (NTC) released hundreds of 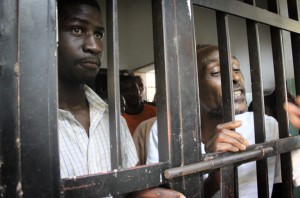 “prisoners” with Libyan DNA to commemorate the Festival of the Sacrifice that follows Hajj. Non –Libyan “prisoners” have been left to rot at the mercy of trigger happy militants to vent 42 years of serfdom on the “Mutasaka”migrant population. The irony is that, these same militants who rose against Gaddaffi’s regime are now in the driver’s seat, and are dishing the same treatment and abuses they rose against in the first place. George Orwell’s “Animal Farm” comes to mind here.

Medecins Sans Frontieres (MSF) has threatened to leave the country because of the state of affairs, and have been made to look complicit in the culture of the torture that is rampantly evident. According to MSF, its field workers have treated 115 people for wounds arising from torture. This does not take into consideration the people who are treated for natural courses like diarrhoea, dehydration etc. Patients had reportedly been brought in for treatment, only to be spirited away again for further torture. MSF Director Christopher Stokes said that “Patients were brought to us for medical care between interrogations, so that they would be fit for further interrogation. This is unacceptable. Our role is to provide medical care to war casualties and sick detainees, not to repeatedly treat the same patients between torture sessions”. By implication, the torturers have been asking MSF to recycle their victims by default. 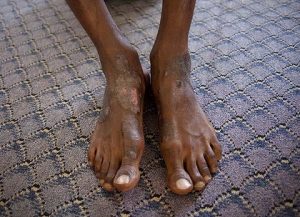 The National Army Security Service is reportedly responsible for “interrogations”. The fact that such barbarous acts are continuing unabated is a clear indication that the NTC is either giving it its blessings or turning a blind eye.  It takes only the good to do nothing for evil to triumph. To all intents and purposes, it is the hopeful that Libya succeeds in it transition. Unfortunately, indications are that the situation is far from successful. The inter clan and inter-tribal chaos that is unfolding now is far from what the proponents of the intervention hoped for. These reprisals would not only fester divisions but also puts the stability of the whole country at risk. According to APF News, there are people in Bani Walid, the last bastion of Gaddaffi’s resistance flying the flag in his honour. Many in the area and sections of the population still harbour allegiance to the old regime. This is not entirely down to their allegiance to Gaddaffi but as a result of the twin factors of the brutal reprisals and the down turn in the economy. If the economic conditions do not make a quick turnaround, indications are that some will start longing for the devil they knew than the angel they have. There is no doubt that it will take time for Libya to get back to at least pre-war conditions. But the NTC may need to act fast before conditions deteriorate.

It will be erroneous to assume that the NTC is god sent to the Libyans. It is not all hosanna as most Libyans just wanted a change; but for the better. The Libyan people have not had the opportunity to demonstrate their acceptance or tacit approval of the NTC by democratic a process yet. There are a lot of issues the NTC will have to deal with, but if they would should separate the goose from the gander, the administration should act to stop the torture; one of the main reasons they rose against Gaddaffi in the first place. Now that the oil deals and building contracts have been signed, can we get back to the moral aspects of the deal; human rights, the main “justification for the NATO intervention?