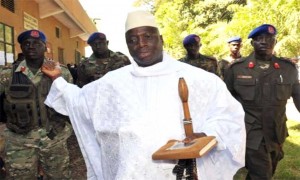 Amnesty International says it has received “credible reports” that Gambia executed nine death row prisoners, including a woman on Thursday. Jammeh was reported to have vowed to kill all 47 death row inmates, in a speech to mark the Muslim festival of Eid. He promised that “by the middle of next month, all death sentences would have been carried out to the letter; there is no way my government will allow 99% of the population to be held ransom by criminals”. Muslims all over the world practice the Sunna of fasting; a time to ask for forgiveness, a time to relate to the sufferings of the have-nots and a time for peace. Muslims, who can afford it, though not obligatory, but like during Eid-ul-Arda celebrate this occasion with the ritual sacrifice of a sheep. It is a ritual that dates back to biblical times, when God asked Abraham to sacrifice his only son Isaac, to him. It sounds like in the case of Jammeh; human sacrifice was strictly on the menu. This could be considered rich; coming from a man who, after winning his fourth term in power in a widely dubious election, told the BBC that “his critics could “go to hell” because he feared “only Allah”. God-fearing may have taken another meaning.

The implications of his latest penchant for notoriety have had far reaching repercussions and reactions. Amnesty International’s deputy director for the Africa region condemned “the the decision of the Gambian President Yahya Jammeh to execute nine prisoners after more than a quarter of a century without execution would be a giant leap backwards”. The irony is that such a “giant leap backwards” comes a week before the death of the man who made “one giant leap for mankind”, Neil Armstrong on the moon. The Civil Society Associations Gambia (CSAG) said in a statement that “on the day of Eid-al-Fitr, when Muslims the world over seek forgiveness, extend messages of peace and love, show solidarity with one another and those in distressing conditions that President Jammeh chose once again to show his brutality and repressive nature”. The EU foreign policy Chief Catherine Ashton said in a statement “I strongly condemn the executions which have reportedly taken place…..and I demand the immediate halt of executions”.

President Jammeh seized power in a coup in 1994 and since then, he has systematically removed potential “Political competitors” from the scene, with the latest coming last year when he sentenced to death eight military top brass that included the former army and intelligence chiefs and the ex-deputy head of the police force for treason. Jammeh’s coup in 1995 was widely seen by many political analysts as a copy cat exercise of the military coup that ousted President Joseph Momoh in 1992. Led by Valentine Strasser, Julius Maada Bio was among a group of six that toppled Momoh in the bloodless coup. Like the recent coup in Mali, Strasser et al cited the inability of Momoh’s government to end the rebel war as one of the main reasons for their action.

Maada later led a palace coup in 1996, and overthrew the government of Valentine Strasser after reported divisions about whether to return the country to muti-partyism, a feat that Maada oversaw before he became an official member of the SLPP in 2005. Maada states in an interview with an IC publication, New African, (27 July, 2012) that “some people in our group, however, wanted to cling onto power, but I disagreed and said we only took power to put things right. I had to act a second time….kept our programme of democratisation, conducted elections and relinquished power after Ahmed Tajan Kabba was elected president. He reportedly cited his commitment to ending the civil war as part of his motivation for the coup.

But that is where the similarities and differences begin and end for Yahya Jammeh and Maada Wonie Bio. Yahya Jammeh has hung onto to power since 1994 and has been seen by his critics as one of the newest but last vestiges of African dictatorships, while Maada relinquished power following an election. Many will see that as a mark of political integrity, and if Bio’s reasons for organising a palace coup against Strasser are anything to go by, you have to give it to him as kudos. The landscape of African politics has not been abundantly blessed with such scenarios; whereby the military take power and ceded it to a civilian government without a fight. At best, military personal have done the chameleon by transforming themselves into civilian rulers; as we saw with guys like Babangida, Lansana Conteh, Yuweri Moseveni etc. In spite of what some will say, he did not do a Jammeh or Babangida, and credit must be given to Bio for that. Yea right.

The truth of the matter is that, the junta set March 1996 as the date for national elections. Strasser attempted to tweak the established constitution by lowering the mandatory age requirement of the president from 45 years of age to one more appropriate to his age, 30. This led to his downfall courtesy of Bio’s coup. The UN quickly threatened sanctions and Executive Outcomes (the fighting machines) threatened to leave the country if elections were not held by March. The NPRC had no option but to succumb to the pressure, allowing elections to take place as scheduled and handed over power on 29 March, when Kabba defeated Karefa Smart.

Since he became the SLPP presidential candidate, Maada has been saddled with a lot of accusations that seem to derail his ambition for the Sierra Leone’s White House. He has been quoted in certain parts of the Sierra Leone media, as saying in 2007 that “he would overthrow a new APC government if the APC won the 2007 election”. Maada maintains that this was taken out of context and that he had said that if the “appalling” conditions that existed in 1992 were to return, he would seize power. Maada has also been yoked with the memory of the 29 victims, who were reportedly killed by the NPRC; of which he was a member of the higher echelons of the command chain.

A recent call for an inquiry into what many describe as “extra-judicial killing” has increasingly grown louder. As a significant member of the then NPRC regime, the relatives have charged Bio with collective responsibility for their deaths. Like an albatross, the death of these 29 people have come back to haunt Bio in his bid for the “big prize”. Bio is quoted as saying in 2011, “I bear neither personal involvement nor personal responsibility for the extra judicial killings that took place during the NPRC era of Capt. Valentine Strasser. I was neither the head nor the deputy head of the NPRC junta at the time the extra judicial killings took place. So I could not have prevented it from happening”.

Many people may side with his version, but others may wonder how such a significant decision to execute such high profile persons would have been taken without his knowledge or acquiescence. There have been calls for him to explain details of what he knows, but an apparent lack of his knowledge about what happened has not only given fuel to his critics but has also left a lot of doubts in the minds of many. As these clouds of doubts gather momentum, Yahya Jammeh’s latest charade is bound to bring the focus back on to Bio Many will say that if Bio is to lead this country, accountability and a clean bill of political health will not go amiss. The appointment of Maada as presidential candidate was seen by many, including members of the SLPP as an unsafe bet.

Since his selection, there have been a lot of infighting, conspiracy and dissent, resulting in a number of SLPP members crossing the Rubicon to the APC camp; with Usu Boie as one of the most high profile. The political party landscape of Sierra Leone has always been riddled with tribal sentiments. Voters have notoriously voted on tribal affiliations rather than manifestos, policies or agendas. Both parties have been known for Mende or Temne persuasions.  It was no surprise that the selection of Khadi Sesay, a Temne, as running mate for Bio was seen by their detractors, as a political ploy to not only appease the dissenters but also to appeal to voters as a broad church. From the word go, many SLPP members did not favour Bio; because of the alleged “baggage” he carried round his neck. Whether this will come to haunt him, like the albatross, is a matter for November 17 as only time will tell.

Maada Bio has promised a “new direction” in his manifesto and has sold himself on the banner as “The Candidate with Drive, Experience, & Hindsight for Effective Leadership”. The worrying bit of the above is the “hindsight” bit and you wonder how many people would want to take the chance be led by the whims of “hindsight”. However, Bio may have done a lot to propagate his message of a “new direction” for Sierra Leone. With Jammeh next door, and with the worlds media firmly trained on his next move, you cannot help but think of how much attention may have been transfixed on Bio’s alleged past history. The recent calls for an inquiry have kept the subject firmly in plain sight of the political discourse. It would be farfetched to think that Bio would do a Jammeh if elected, but would the electorate see Jammeh’s latest craze as a potent reminder of the past?

As we prepare for the November elections, let us choose freely and fairly; and hope that the Almighty will guide us in our decisions for the best man to win. Lest I forget: A BIG THANK YOU TO ALL DONORS TO OUR COUNTRY IN THE WAKE OF THE CHOLERA OUTBREAK. THANK YOU FINLAND AND THE OTHERS.

I always wanted to vote for the best man; but he is never a candidate.