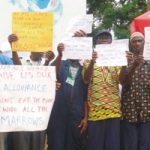 The Intermediate and Junior Staff Secretariat Association (IJSSA) of the University of Sierra Leone (FBC, IPAM and COMAHS), yesterday held a peaceful demonstration on their various campuses in relation to their leave allowances.

According to Mr. Henry Bobson James, President of IJSSA IPAM campus and also present National Financial Secretary of IJSSA, they normally received their leave allowances in the first or second week in August, but they are yet to receive for this year which had caused so many embarrassments in their various homes. “We have to pay our children’s school fees as NPSE, BECE and WASSCE results are out.”
He disclosed that they were called to a meeting by the University Administration past August to discuss the issue of their payment which the administration said they will pay sixty percent of their allowances and forty percent at a later date. But, according to him, they openly denied the proposal which led to the demonstration.

“It will serve well if someone receives his leave allowance at the start of the year or when the person is about to go on his/her leave as that will reduce the work load on the administration,” said Mr. James. Mr. David Sesay, President of IJSSA, COMAHS campus, stated that this is the first time he is experiencing such a situation as he had served for twenty years as employee of COMAHS. He added that the University Administration has summoned them to another meeting for today which they will attend to know the outcome as they are desperately in need of that money to solve their various problems.