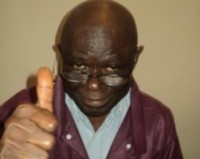 Considering the contagious and mysterious nature of Ebola, I think it`s very early to start ringing any bell about any news, but we shouldn’t relent to thank those who are risking their precious lives on the frontline in the fight to stop the virus. I’m therefore obliged to chant Bravo! and many thanks to all and sundries who are working 24/7 at various epicentres in the country with special reference to Kenema and Kailahun as the daily updates about the two quarantined cities are showing very positive signs in the past three days. This is not because parliamentarians have received more than Le 60,000.000 (each) in their names; not because they have been placed under a solid security quarantine that is even harder than the rock of Gibraltar; not because prices of basic commodities have skyrocketed as the government plan another 3 days lockdown that will render the quarantine of Kailahun and Kenema meaningless; but because the ill-equipped  Sierra Leonean medical personnel backed by doctors without borders and other foreign medical forces are working tirelessly to contain the further spread of the dreadful virus in the two districts.

According to the daily updates received from Ministry of Health and Sanitation in Freetown, the number of new cases received from the two eastern districts has dropped drastically. Though the virus is still spreading in other parts of the country, but we hope decrement in infection cases in Kailahun and Kenema where the whole tragedy began barely 3 months ago, could be a sign of light in the tunnel for everyone.

Let’s take a look at the following: