“I’m ready to have a little bit more autonomy and to take the lead in my own life,” Isha Sesay tells the media.  And she’s definitely taking that lead. After 13 years at CNN, where she’s been a top anchor and correspondent, she’s moving on. She’s covered elections and national emergencies, worked with world leaders and politicians — and, more than any of that, she went from a fairly green reporter to an impressive force in the field of journalism. “I’ve been at CNN for 13 years, it’s the end of a huge chapter,” Sesay explains. “It’s been such a tremendous time, such an eventful 13 years — I feel like I grew up working there. I showed up as a 30-year-old in 2005, with two suitcases and a one-year contract — I’ve managed to make that last 13 years! It’s been amazing, I’ve been married when I was there, divorced when I was there, it’s all happened.”

With such a prominent and illustrious role, why is it all coming to an end? Well, within a few seconds of speaking to Sesay, it’s clear that her passion and her drive have become laser-focused — and she’s more than ready to take things into her own hands. She’s taking a step back from working as an anchor to focus on what resonates the most with her. For Sesay, the future is female and the future is Africa.

Although there are a lot of changes coming up for Sesay, they all seem to be at the natural meeting point of her professional life and her personal passions. “It’s an exciting time for me — and a nerve-wracking one,” she says. “I’m writing a book about the Chibok girls, it’s being released in May 2019. It really speaks to where my head is at, currently — a lot more coverage about Africa, a lot more work on the continent, and a lot more focus on young girls. That’s what I’m about right now.” The Chibok girls, the 276 young girls kidnapped in Nigeria by Boko Haram in 2014, are particularly personal for Sesay. She traveled to Nigeria to cover the story and, like many current events in Africa, she feels the way it’s been represented in the press just doesn’t do it justice. While in 2014 the news was full of headlines dedicated to the Chibok girls, the media has long since moved on. “It’s a real indictment of the society we live in now,” she says. 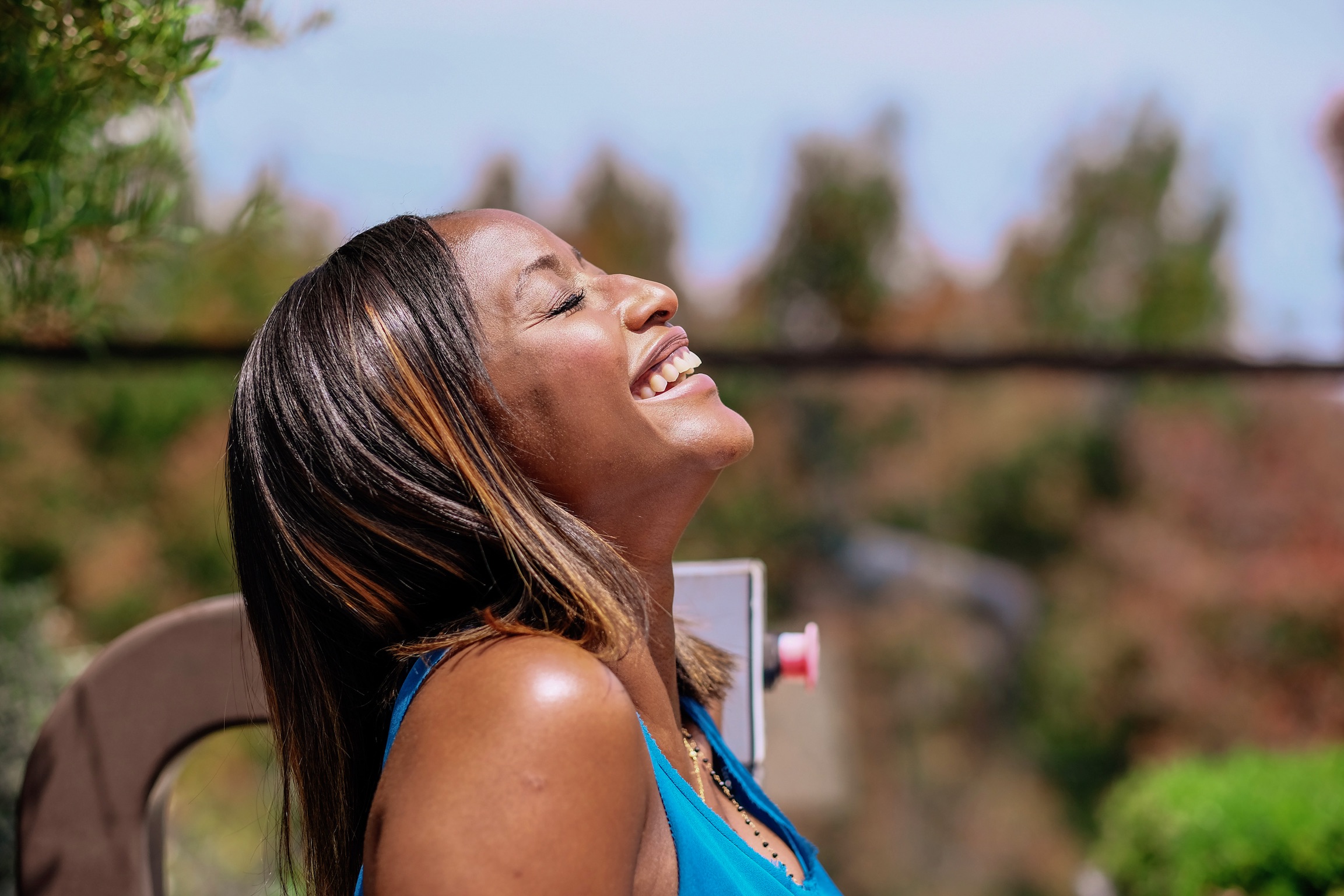 Sesay isn’t scared to vocalize something so many of us have noticed about Western media at the moment. On the one hand, there’s a problem in the West with the total Trumpian domination of media. “It’s all so Trump-focused,” she explains. “He sucked all of the oxygen out of the room. The media is following that lead to the exclusion of almost everything else, in a meaningful way. For me, personally, it’s not what I want to spend all my time doing.” There is so much else going on in the world and you can feel Sesay’s frustration that it’s not being covered. “After a while, I want to do more coverage of the Ebola outbreak, of the elections in Liberia, or any number of things that are happening. I’m ready to take control of what I’m talking about.”

But on the other hand, there’s a more fundamental problem with the way that the Western media covers Africa. Too long, Africa has either been neglected or shown in over-simplified, broad strokes. Luckily, there’s starting to be a shift. “I want to put a focus on Africa in the way I wish all international media would cover Africa,” she says. “Now it’s either underreported or not reported with the right nuance and context. I’m going to turn my attention to being one in this new army of people who are moving into this space, who are representing Africa in a new way.” Although many would argue she’s one of the faces leading that charge, she’s quick to give credit where it’s due. “I’m not going to be the only one doing that, I’m one of a group of Africans… There’s a sense of responsibility, a sense that we have to do better.”

There’s one subject that Sesay returns to again and again. “I want to spend more time with my girls,” she says. She speaks about “her girls” often and warmly, with a sense of responsibility ringing through. Her girls are the girls of W.E. Can Lead, a nonprofit she set up in Sierra Leone. The girls of Sierra Leone face unique challenges, like teenage pregnancy, a lack of education, and early marriage due to extreme poverty. W.E. Can Lead has helped hundreds of girls understand their potential — and given them the tools to excel through education and empowerment. The project has exploded in the last few years, in part thanks to Sesay’s commitment to being with them, doing the work. “You can’t build things remotely — I don’t believe in that,” she explains. “I’ve built an incredible leadership team, but part of my organization’s DNA is fuelled by my own personal biography, by my own story. I need to be there with my girls.” 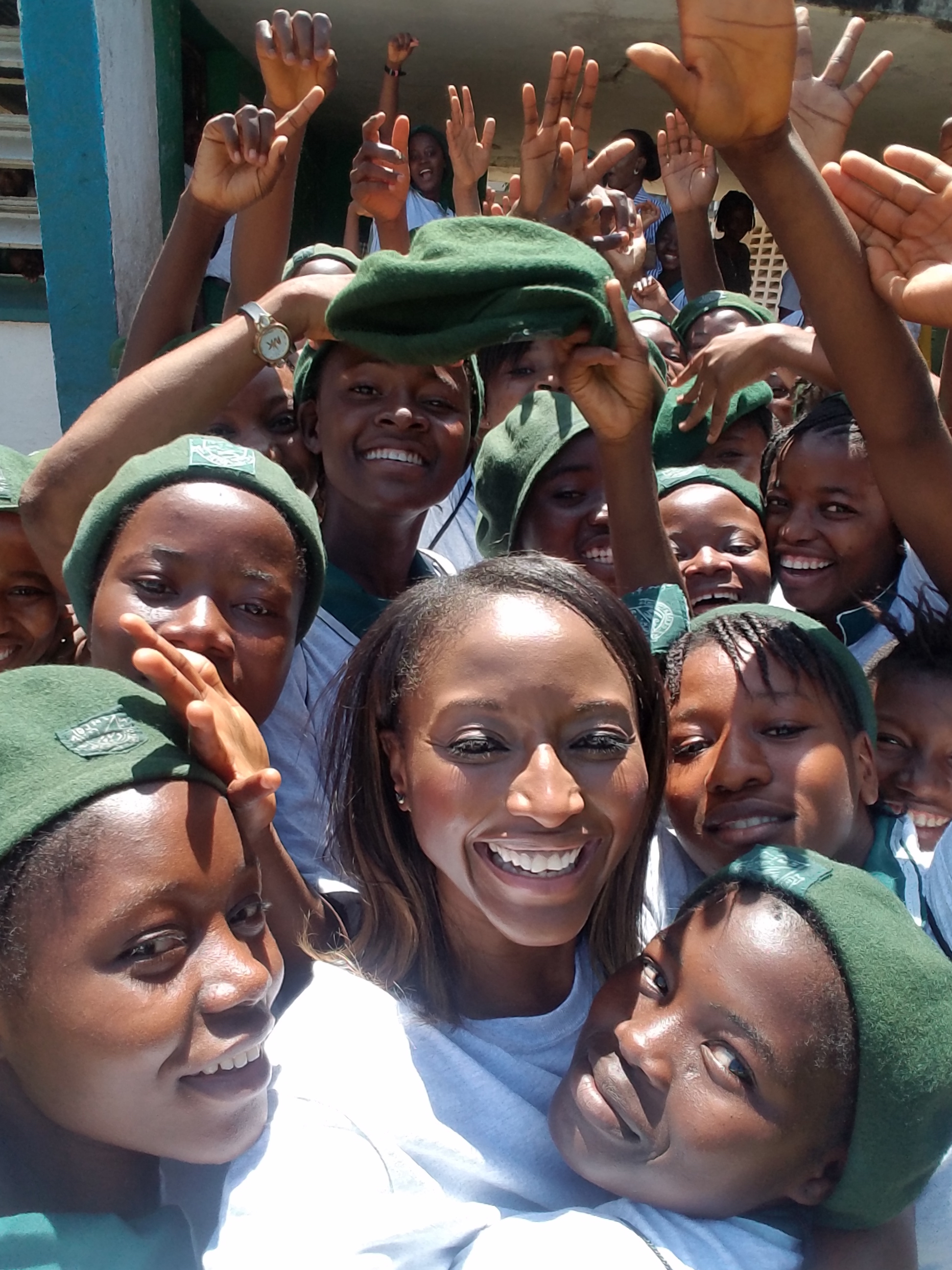 For Sesay, doing better isn’t just about coverage and attention — although that’s clearly vital. She’s committed to being there, in the trenches, doing the work.

With both the Chibok girls and the W.E. Can Lead girls, it’s clear that Sesay feels both personally drawn to them and aware of her privilege next to them. She was born to parents from Sierra Leone, returning there when she was seven for a large portion of her childhood. “It’s personal to me for many reasons — if it wasn’t for the lottery of life, I could have been born in a place like Chibok. I could have not had the exposure and education that I have had. For me, these girls mean a lot more than just a headline.” Acutely aware of the drive, direction, and support given to her by her mother, Sesay is determined to be that strong female role model — not just to one girl, but to hundreds.

“There are over 600 girls in my leadership development program. It’s been growing exponentially, with a view to moving beyond Sierra Leone to the rest of the continent. I feel like I’m nurturing the next generation of female leaders — changing homes, communities, then countries and the continent. I’m talking about leadership at every level, we’re empowering these girls and helping them to understand their own power.” Her reason for empowering girls? It’s simple. “We’ve given men a very good crack at it,” she laughs. “But we need more female leaders. It’s our turn.”

If Sesay has her say, it definitely will be their turn. “For me, it’s been wonderful, it’s been a wonderful time doing what I’ve done — I’m ready to have the freedom to do the stories I want. I’m ready to have a little bit more autonomy and lead my own life. I speak to my girls about leading their own lives — it feels like the right time for me to lead my own. Being an anchor is fun, it’s glamorous, but it’s very much controlled by other people. I’m ready to have my own say in where I go next.”  With a keen political mind and selfless dedication to helping others, where she goes next is an exciting and impressive prospect.

Along with books, non-profits, and the production projects she has in the mix, one of Sesay’s next steps will be teaming up with Misan Harriman, founder of What We Seee. “Quite simply, Isha is a kindred spirit to the WWS brand,” Harriman says. “Through our partnership, we plan to make content that truly deserves to be seen.” Sesay echoes his sentiments. “I’m so excited for you to see what we’re working on. Watch this space.”