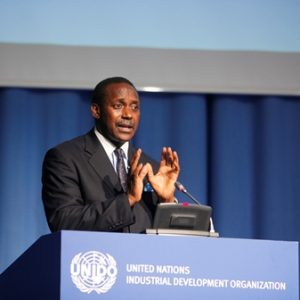 The Director General of the Vienna-based United Nations Industrial Development Organization (UNIDO), of Sierra Leone, is among a chosen few slated to receive the United Nations Association (UNA-USA) Global Leadership Awards scheduled to be held in New York in October, 2012.

The Global Leadership Awards Dinner brings together a distinguished audience of nearly 500 policymakers, diplomats, United Nations supporters, business leaders, celebrities, and members of the media, as well as UN Secretary-General Ban Ki-moon, UN Goodwill Ambassadors and Messengers of Peace, and representatives from the U.S. Mission to the UN. It has the special recognition as one of “New York’s Top 100 Events 2012,”

Dr. Yumkella is being honored for his work on a variety of global issues, including promoting sustainable energy for all, poverty reduction, climate change, and the advancement of the Millennium Development Goals.

Attending the third Clean Energy Ministerial Summit in London, Dr. Yumkella once again noted, as he constantly does that for Africa, modern energy access is basically and economic and health development tool. “In my village of Kychum, in Kambia District in Northern Sierra Leone, women cook with firewood, and we know from the World Health Organization (WHO) that the impact of that is 1.3 – 1.5 million deaths each year – more than malaria,” he said.

“The dream of every developing country is to be modernized, to live as people live in the UK, for example – they can’t do it without energy, but as 60 – 70% of greenhouse gas emissions come from energy-related activities, we need transformation. “

Dr. Yumkella’s passion for energy and environment related causes have been noted around the world. His leadership has been recognized for bringing renewed and vital focus to global energy issues and his help in coordinating the United Nations response to energy issues.

Along with members of Secretary General Ban Ki-moon’s high-level group on Sustainable Energy for All (SE4ALL), he has played a major role in highlighting the need for universal access to energy as well as increased energy efficiency and enhanced deployment of renewable sources of energy which form the three major goals of the SE4All campaign. He is charged with galvanizing the world community; governments, global businesses and civil society to rally around and support Mr. Ban’s energy access initiative.

As Chair of the Secretary-General’s Advisory Group on Energy and Climate Change (AGECC) from 2008 to 2010, he played a leading international role in identifying the lack of access to energy as a crucial constraint for development efforts. The Group’s report, which was issued in April 2010, confirmed the need to increase energy access, energy efficiency and renewable energy options in order to deal with the climate change challenge and realize the Millennium Development Goals.

Other awardees to be recognized for their work around the world include Archbishop Desmond Tutu. The retired South African Anglican Archbishop who received the 1984 Nobel Peace Prize will be recognized with the Champion for Global Change Award for his strong leadership as an advocate for human rights and global health, as well as his campaigning against poverty, racism, and sexism.

Special Rapporteur on Syria and leading UN independent human rights expert, Paulo Sérgio Pinheiro, will receive the Leo Nevas Human Rights Award for his more than 30 years of work in support of human rights both in the UN and Inter-American systems. Mr. Pinheiro is a Brazilian professor of political science, diplomat and legal scholar.

The entertainment industry’s preeminent news organization, Variety, will be recognized for their leadership in answering Secretary-General Ban Ki-moon’s call to activate the creative community in solving global problems.

“This year’s honorees demonstrate that individuals and organizations from all corners of the globe can elevate the UN’s work and help the world,” said UNA-USA’s Executive Director Patrick Madden. “American communities applaud the work of these distinguished awardees as they help educate and advocate on behalf of the UN every day,” he underscored.

For 54 years, the Global Leadership Awards Dinner has called attention to the vital role the UN plays in helping the global community advance peace, prosperity and justice and recognizes individuals and organizations for their outstanding leadership in furthering the purposes of the United Nations Charter and advancing UN causes—from global health and economic development, to human rights and environmental sustainability.

In another engagement, Dr. Yumkella will be recognized and awarded the Honorary Distinguished Professorship at the Technical University of Mongolia early next month during his upcoming official visit.