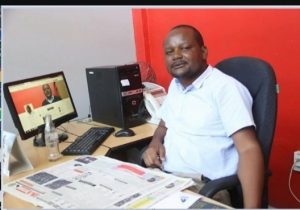 Notwithstanding the fact that Zimbabweans are protesting poor public services, high cost of living, daily power cuts, delays in civil servants salary payments and suppression of freedom of expression, Zimbabwe’s president Emmerson Mnangagwa has accused foreign governments for inciting protests in the country.

Last week, Amnesty International criticized president Mnangagwa in a recent report for presiding over a ruthless and systematic crackdown on the opposition and protesters.

In a recent radio broadcast on Afrobeatradio over WBAI, 99.5 FM in New York, Kholwani Nyathi, editor at the Standard newspaper and assistant editor of News Day Zimbabwe discuss the current situation in Zimbabwe with correspondent Dennis Kabatto

Kholwani Nyathi: I’m sure what you are referring to is a report by Amnesty International that was released on the anniversary of the inauguration of President Emmerson Mnangagwa after the presidential election of 30 July, 2018.  So, it’s a year since President Mnangagwa took over power.

To a large extent the assessment by Amnesty International represents what’s been happening on the ground.  Just before the president was inaugurated, you will remember that there were 6 people that were shot in Harare protesting the late release of elections results and then a few months after that incident another similar case of human rights violations happened in January 2019 when there were widespread protests over fuel price increases.

Human Rights International says at least 17 people were killed by soldiers and several women were raped.  Subsequent to that, there were a lot of reports about human rights violations involving state security agencies such as the police and the army.

The worst happened just a few days ago, an attempt to hold protests around the country but those protests were banned.   There are also reports that activists have been abducted from their homes and tortured.  So really to a large extent Amnesty International’s assessment gives a full impression of what is happening in Zimbabwe under President Mnangagwa as president.

Some people say recent protests this month were organized by the opposition party the Movement for Democratic Change.  Is that true?

Yes, that is correct. The MDC is the main opposition party in Zimbabwe.  The MDC is organising the ongoing protests

What is it that the MDC and people of Zimbabwe are protesting against?

There are two issues really.  The MDC has not accepted the outcome of last year’s elections.  They are challenging the legitimacy of President Mnangagwa.  So they want to hold talks with him.  Then there are also issues about the economy, the economic situation is getting worse, prices are going up, inflation is going up so people are going out on the streets to protest.

There is also the issue of hunger and the United Nations says over 5 million Zimbabweans face starvation by early next year.  From your observation how accurate is that evaluation?

Yes it is very accurate.  Zimbabwe is facing a serious drought this year.  Besides the economic situation which has made it difficult for famers to produce to their maximum.  There is also the issue of drought, very little rainfall in the past season so which means right now we’re going to the farming season.   We didn’t harvest that much food in the previous season, so it is going to be a lot of food deficit going into the next farming season.

Kholwani Nyathi: Over five million Zimbabweans face starvation by beginning of next year if the $300 million UN call for support does not get a positive response.  A severe drought and collapse of the country’s agriculture sector is blamed for the dire situation

Power cuts have been a daily occurrence paralyzing almost all of Zimbabwe’s productions.  Can you confirm that Zimbabwe is experiencing up to 18 hours of power cuts a day?

Yes it is a fact.  It is also link to the drought as well.  Because the main source of hydro power, the Kariba Dam is almost running dry.  So in Zimbabwe everybody relies on Kariba Dam because the thermal power station is not producing to its optimum due to lack of maintenance, they continuously break down.  Zimbabwe’s thermal power stations were built decades ago and are poorly maintained.  And the government hasn’t import power from neighboring countries so the electricity situation has been dire since May this year.

Was there any protest today?

Kholwani Nyathi: There were no protests today. The police banned demonstrations meant for six cities. The MDC has notified the police it wants to hold protests across the country on Friday and Saturday

When was the last protest?

Kholwani Nyathi: Last week.  But the MDC has notified the police it wants to hold protests across the country on Friday and Saturday

There’s talk that Zimbabwe is introducing a new currency.  Do you know when the new currency will be launched?

Kholwani Nyathi: In June Zimbabwe ended a decade of a multicurrency system and adopted a quasi currency as its sole currency.  The value of the local currency has been falling rapidly since then, pushing prices up significantly.

What’s the status of the Southern African Development Community (SADC)?

Kholwani Nyathi: Sadc resolved at its recent summit held in Tanzania that the region must rally with Zimbabwe in its campaign against sanctions.

What role is South Africa playing in regards to SADC and Zimbabwe given its economic downturn?

Kholwani Nyathi:  South African president Cyril Ramaphosa has largely been sympathetic to President Emmerson Mnangagwa like other regional leaders. They seem to be of the firm belief that Zimbabwe’s problems are caused by Western sanctions imposed during the Mugabe era.

Kholwani Nyathi: According to the government, Mugabe has been in a Singapore hospital since April. He has not been seen in public since his 95th birthday celebrations held in Harare end of February