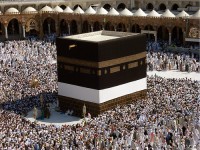 President Dr Ernest Bai Koroma last week received on behalf of the Government and People of Sierra Leone twenty-six (26) Hajj scholarships from the Kuwaiti and Egyptian Governments respectively. The donations were made to enable eligible applicants to perform this year’s pilgrimage to the Holy Land of Mecca.

The first set of sixteen (16) Hajj scholarships from the Kuwaiti Government was facilitated and presented through the Africa Muslims Agency. President Koroma described the presentation which was done at the Presidential Lodge, Hill Station, as a traditional one which gained momentum since he took up office as President in 2007.

The President recalled that when he assumed office in 2007, he vowed to regularize the entire Hajj programme for Muslims, which was not firmly in place. He thanked the Government of the Kingdom of Kuwait for the gesture, saying the government of Sierra Leone cannot afford to provide scholarship for every Muslim in the country to perform Hajj.

Presenting the delegation, Moijueh Kaikai said Kuwait had been a long bilateral partner of Sierra Leone, with support in education and health among other sectors.

He said Kuwait has its own programmes currently operating in the country, which formed part of the Kuwaiti government’s commitment coupled with the regular donation of the Hajj scholarships to Sierra Leonean Muslims to perform the Holy pilgrimage.

Country Director of Africa Muslims Agency, Kemamine Ahmed extended the agency’s profound gratitude to the government and people of Sierra Leone for according the agency friendly corporation that is facilitating the accomplishment of its many humanitarian programmes.

Kemamine Ahmed informed President Koroma that the Prince of Kuwait through the management of Direct Aid/ Africa Muslim Agency in Sierra Leone offered the 16 Hajj scholarships to beneficiaries of this year’s pilgrimage.

In a related development, all geared towards boosting the efforts of the Government of Sierra Leonean to send as many Muslim pilgrims to perform this year’s Hajj rituals, the Charge d’ Affaires, Embassy of the Republic of Egypt in Freetown, Abdallah Hosny Ahmed, similarly presented ten (10) Hajj scholarships valued at $45,000 (Forty-five thousand United States Dollars) to President Koroma on Thursday 26th September at State House.

President Koroma described the gesture as timely and worthy of appreciation. He profusely thanked the Government and People of Egypt, for the help in supporting fellow Muslim brothers and sisters intending to perform Hajj rituals in Mecca this year.

President Koroma observed that performing Hajj is one of the five pillars of Islam, which every Muslim craves for as an accomplishment once it is performed. He reiterated government’s profound gratitude to the Egyptian government for the support.

The Chief Executive disclosed that a good number of Muslims want to perform Hajj but due to limited resources, government cannot afford to support everybody. He used the occasion to acknowledge the Egyptian government’s numerous interventions in education, health and foreign relations.

President Koroma also handed over the money in respect of the 10 scholarships to the Minister of Social Welfare, Gender and Children’s Affairs to be delivered to the Hajj Committee.

Ahmed said the Egyptian Government through the embassy offered the scholarships to enable Muslims perform Hajj in the Holy land of Mecca.