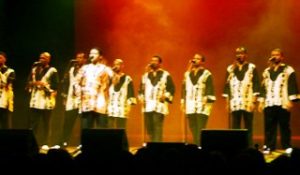 29 performances embodying a variety of genres and artists from around the world including Brooklyn and across the United States, Europe, Latin America and Africa are  presented at this year’s special 35th anniversary’s festivities that began June 5 – August 10.

A majority of the performances – 24 including 20 music concerts are free (a $3 donation is suggested) and 5 shows are reasonably priced benefit concerts.

From the year 2000 up to 2010, Celebrate Brooklyn showcased African music festivals that featured an all day line-up of artists from different regions of the continent in addition to an African marketplace with over 50 vendors selling food, arts and crafts and clothing.

However, according to Walsh “as the number of park users climbed each summer the event logistics became problematic as the only location for the marketplace was on the park drive, which had become dangerously congested with cyclists, vehicles for marketplace deliveries, festival attendees and other park users.”

Grammy nominated duo Amadou & Mariam (popularly known as the blind couple from Mali) with opening act Tuareg guitarist Bombino will perform on Friday, June 21 at 7:30 pm as the first of two African music performances this season.

On Friday, August 9, electro hip-hop artist TK Wonder will open for dancehall reggae most commercially, successful artist Shaggy for an evening of Caribbean cultural delight followed by the festival’s conclusion on Saturday August 10 with native Brooklyn duo They Might Be Giants (TMBG) and Moon Hooch.