Liberians vote today. Who will it be – the incumbent and Nobel Peace Prize winner Ellen Johnson-Sirleaf of the Unity Party or her main challenger for the Executive Mansion Winston Tubman of the Congress for Democratic Change party? 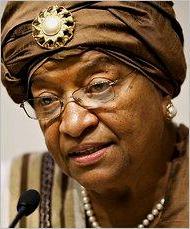 ext five-six years after these elections, the last held in 2005, with watchers already describing it as a close race. Incumbent President Ellen Johnson-Sirleaf (72) is pitted against a team which is headed by long-time diplomat Winston Tubman (70), (remember the Tubman name?) and has former international football star George Opong Weah who had challenged Mrs Johnson-Sirleaf in the past and lost. On the final day of campaigning reports say large crowds were seen at a rally of the opposition with supporters of George Weah and Winston Tubman – a sign that it was going to be a tight race. President Johnson-Sirleaf has not been sitting idle in Monrovia. She has been criss-crossing the country exhorting voters to let her in once more so she can finish what she sees as a job to be further advanced after years of war and suffering that left the country in ruins, hundreds of thousands, if not a million or more dead and far greater numbers traumatised and displaced. Her main opponent Winston Tubman appeared to have scored a negative point when after he heard that President Johnson-Sirleaf had won the Nobel Peace Prize told the BBC that the President did not deserve the award, calling her a war-monger. Mr Tubman – a Har

vard graduate, like Mrs Sirleaf – has been dismissive of the Nobel Committee's decision, arguing that the prize will not influence voters. Observers say he should have been gracious enough to first of all congratulate her as a compatriot and then go on to express his doubts. While observers say the incumbent had used her international connections to attract international financial and aid agencies to smile favourably on the country, diplomat Winston Tubman is believed to have his own clout that could also be used to play into the hands of the international community.

The challenges ahead would be enormous for whoever comes out as winner in a contest that is expected to go into a re-run. Corruption is top of the list of problems in a country where those in authority are hardly challenged on such issues – at least in public. The BBC's Jonathan Paylaylay adds –

Liberia's main energy plant has not yet been rebuilt – and most people in Monrovia still do not have electricity or running water. In fact, there is no running water even at the main offices of Liberia's water company. Unemployment is also extremely high – some say that 80% of the workforce is unemployed and the youth are most affected. Mr Tubman, 70, came fourth in the 2005 election, but the Congress for Democratic Change candidate is seen as Mrs Sirleaf's main challenger this time round.Mr Weah, who lost a run-off to Mrs Sirleaf in 2005, has boosted his popularity, especially among Liberia's youth, analysts say. "Mrs Sirleaf has had almost six years now to demonstrate what she can do inside Liberia for the Liberian people," Mr Tubman says. "I often wonder whether it is the popularity of our ticket or the unpopularity of the incumbent that draws the crowd to us."

The die is cast and Liberians and the international community await.