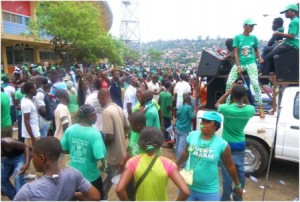 Reports from the Sierra Leonean capital, Freetown has indicted that the flagbearer for the Sierra Leone Peoples Party (SLPP) Rtd Julius Maada Bio and his running-mate, Dr. Kadie Sesay together with 21 aspirants for the Parliamentary seats and supporters in the Western Area, yesterday October 8 showcased their party strength.

If the crowd is anything to go by, then the November 17 elections will be a tightly contested battle by the SLPP and All Peoples Congress (APC) who are claiming that Western Area is their stronghold. The crowd yesterday showed that the elections will be keenly contested in the Western Area.  The APC is claiming the Western Area is under their control, while the SLPP is saying they are going to regain Western Area. After the nomination of the SLPP candidates for the Parliamentary elections, their flagbearer and his running mate, together with top party stalwarts addressed supporters outside Stand three of the National Stadium and then moved along major streets in the Western Area, chanting their party slogans and playing music from musical sets.
The nomination which started at 9 a.m at the Presidential Lounge of the National Stadium in Freetown, saw all 70 aspirants in the Western Urban and four in the Western Rural, going through the process in a systematic order. According to the Western Area Regional Chairman, Brima Keita, he said that his party candidates followed the guidelines of the nomination process and that the process went on peacefully.
He said that the process was not strange to them because during the local councils nomination process, they went through the process smoothly. Sheka Kanu aspirant for Constituency 100, said that what he heard people about the process and what he went through are quite different. He said that he thought, the process was difficult, but found out that the process was simple.
Mohamed Kamara aka Med K, aspirant for Constituency 101, says that he aspired in 2007 but lost and he is contesting again for the 2012 elections. He said that the nomination process has improved compared to the previous process in 2007.
Med K stated that before the nomination process, NEC conducted a pre-nomination forum for them, where they were educated on the Rules and Regulations of the process and how to go about it. The aspirants said that the process was fast and was peaceful.
One of the female aspirants, Gloria Fofanah of Constituency 97, said that this is her second time to contest for the same Parliamentary seat. She said that the process was simple and excellent. Madam Fofanah express optimistic to win the seat.
Abdul Aziz Carew, aspirant of Constituency 104, said that the process was ok with no obstacles. He said that the case he was convicted of has given him an edge to contest in this election.
He stated that his popularity in his Constituency is very tense and that he has no match.  At the end of the process, Brima Keita presented all the 21 aspirants to Maada Bio and Dr Kadie Sesay at the Presidential Lounge of the National Stadium where they took group photos and then moved to Stand 3 of the stadium. At Stand 3, Maada Bio admonished his supporters to be law- abiding and stated that he has given ejectment notice to President Dr Ernest Bai Koroma. He said that his party is sure of winning the elections.
This is the last process the party has undergone for the elections and if they win, they will produce the first woman as Vice President of Sierra Leone. The SLPP is one of the oldest political parties in Sierra Leone.
However, some of the aspirants expressed concern over the lack of first aid officials, as it is possible for any urgent medical situation during the process and that NEC should consider this in the future.