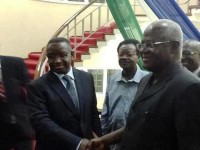 On January 27, 2014, I wrote you an open letter on the amendment of Section 79 (1) of the National Constitution of Sierra Leone 1991 in which your Government introduced entirely new qualifications for the position of Speaker of Parliament. I also dealt with the purported annulment by a spurious court decision of the election results in favour of the SLPP candidates of constituencies 05 and 15. I especially emphasised that the country will be strengthened and its administration respected only if its government leads by scrupulously respecting and upholding the tenets of the nation’s Constitution and the Rule of Law. There was general suspicion that your motive for these changes was to enhance your ambition for a third term in office, the realization of which is only possible, to start with, by installing and maintaining a pliant Legislature.

You will also recall that just a few months after the 2012 Elections, Mr. Balogun Logus Koroma, the APC Campaign Coordinator for the 2012 Elections, was on radio and newspaper justifying a Third Term tenure for you. As was expected, the people immediately opposed that Third Term proposal by Mr. Koroma, which compelled your office to issue a disclaimer. Whilst the public was still contemplating what could have been his motive, he was immediately awarded a senior ministerial portfolio – Minister of Transport and Civil Aviation.

Mr. President, very recently, you informed political leaders that this is your second and final term in office and urged them to work together for the peace and development of our country. Subsequently, however, for reasons which have bemused the public, the Deputy Publicity Secretary II of your Party, Robin Fallay, again re-started the debate for your Third Term tenure. This has been followed by a well-orchestrated ploy to manipulate our deprived youths once again to demonstrate in favour of this plan. And in an undated Press Release from State House on this issue, although you re-echoed a denial of interest for a Third Term, viz: “At the moment, there is no room for debate on the tenure of Office of the President as it is clearly entrenched in the provisions of the Constitution of Sierra Leone”, yet in a recent meeting at your Party Headquarters in Freetown, you endorsed the superfluous thinking that people are free to debate the issue.

Obviously, Sir, that Press Release and your recent support for the debate cannot sit comfortably together anywhere. Mr. President, all recent indications clearly suggest that you are supporting this debate and that you also intend to promote another manipulation of the constitutional process. I would therefore be remiss if I fail to tell you that Sierra Leoneans, including members of your own Party, are stoutly opposed to an extension of your presidency or a Third Term; and I need hardly remind you that you will bear the greatest responsibility for any negative consequences that may emerge. It is also obvious that the question of either an extension of your presidency or a third term, contrary to the Constitution, is a matter of national security, not merely a matter of party politics.

May I also remind you Mr President that the current debate for a Third Term or an extension of your tenure will undermine the peace and stability of our country and our fledging democracy. This is already evident by the ongoing radio discussions up and down the country and the reported rift among “mask devils” (masquerades) that paraded the streets of Freetown on the 53rd Independence Anniversary, on April 27, 2014. In this context, it is also significant to recall the recent admonition given by the United State Secretary of State, John Kerry, to your Congolese counterpart, President Joseph Kabila that African presidents must respect their country’s Constitution and not run for a third term in office.

I observe that civil society groups, including the Press, have also on several instances pointed out to you the dangers of pursing this ambition. I want to take this opportunity to call on other well-meaning groups, particularly the Sierra Leone Bar Association, to join in this campaign against a Third Term or an extension of the tenure of your presidency. Mr. President, rather than getting distracted by this Third Term ambition, there are far more important issues that should engage your attention at this material time. These include the deteriorating electricity situation in all the provincial cities except Makeni; the poor road conditions; the growing youth unemployment; the fight against corruption; the weakening of the Judiciary; the high incidence of diseases; the limited access to safe drinking water; the poor educational and health standards; the limited access to adequate and nutritious food; the poor conditions for our workforce; the growing land-grabbing propensity and the deprivation of the rural poor.

I would also like to encourage you to emulate the Late President Ahmad Tejan Kabbah who upheld the Constitution of the Republic, promoted democracy and left us a peaceful Sierra Leone. History will certainly not judge you kindly if you allowed your personal ambition to override the national interest.

I want to take this opportunity to once again appeal to all democratically-minded Sierra Leoneans to do everything under the law to challenge what is happening in the country. As Sierra Leoneans at home and abroad, we only have one country that we can truly call our home and we have a duty to guarantee its peace and tranquillity.