When a crowd of youths attempted to thwart the government’s efforts to relocate a generator from Makeni to the neighbouring Portloko District, it ended in an avoidable loss of lives of about seven people. The anger and confusion in the region and beyond was understandable; resulting in the adapted theme song of “Makeni Lives Matter”. This was coming hot on the heels of the demise of George Floyd who was killed in America by the police.

Many blamed the authorities for using the youths as fodder to promote their political agenda. While some condemned the youths for engaging in such a behaviour in the first place, others identified the lack of employment and youth engagement as one of the factors contributing to their vulnerabilities. Some identified these as reasons why the gullible youths were prone to manipulation and exploitation. Distrust between the government and the region, which is predominantly an opposition stronghold continued and the rest is history. President Bio reportedly paid a visit to the region; one that was described as very positive in general.

But amidst the dark clouds surrounding such an atmosphere of youth unemployment and general dissatisfaction, is a ray of light for the future. Mr Robinson Sesay Sr, (popularly called “Big Brother,” an indigene of Makeni runs a youth voluntary scheme called YouthBuild Sierra Leone (YouthBuild-SL.)  Over the past few years, the vocational organisation operating as a social enterprise, which is funded by charity and donations, YouthBuild-SL has engaged youths in various schemes like construction, education, graduate success, leadership development, counselling and case management. 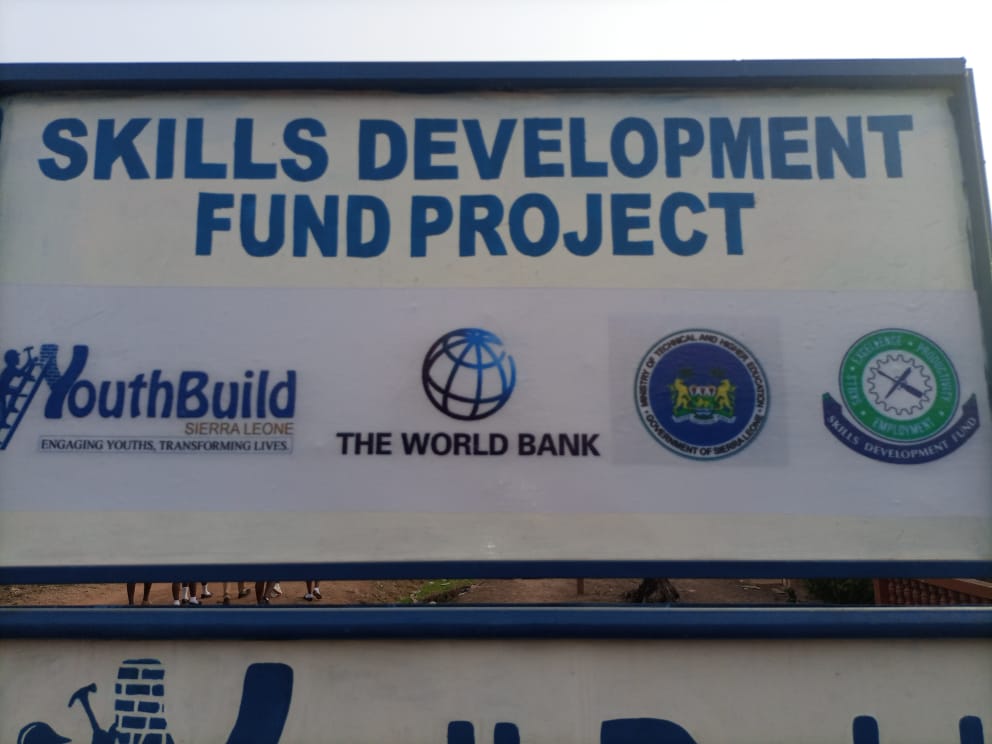 Among many others, YouthBuild-SL pledges to improve and rebuild the community, develop potential leaders, educate the youth and maximise their potential for a brighter future. As CEO, Mr Sesay is ably supported by Charles Hubbard, Mary Bynum, Rosemarie Osujie, Angela Isha Bangura, Mr Robinson T. Sesay and Harriet R. Browne in various positions as board members. Volunteers and participants on the ground also support in various ways to ensure that the organisation keeps ticking.

One of the stand out achievements of YouthBuild-SL is the provision and promotion of the youths in; Construction, ICT, Fashion Designing, Agriculture, and many other vocational skills. Participants of YouthBuild-SL have developed so rapidly that they now have a carpentry shop to make locally sourced furniture, they engage in building, and operate an educational sector for the youth in the area. In addition, the participants also train as car mechanics and fitters, graphic design and printing, information technology, fashion design, agriculture, community service, catering and hospitality and many more. In short, YouthBuild-SL aims and continues to engage the youths in almost every facets of life for a brighter future.

Speaking to Mr Sesay, he recalled his time in America where he spent years before returning home to Makeni. He discussed the time he took to evaluate his home town and how he identified the awareness and participation of the youth, as one way to make a meaningful contribution to his community.  Mr Sesay recalled how he used to see youths in Makeni idling by and engaging in undesirable activities all over the community.  But instead of condemning the youths, he realised that time occupation, lack of leadership, unemployment and support for the youths were some of the factors resulting in what he thought was a becoming a “lost generation”. “That was when I decided that something needs to be done”. Mr Sesay jokingly confessed that he knew at the time that he didn’t have all the answers, but that he could make a difference, if people could help the youths help themselves. 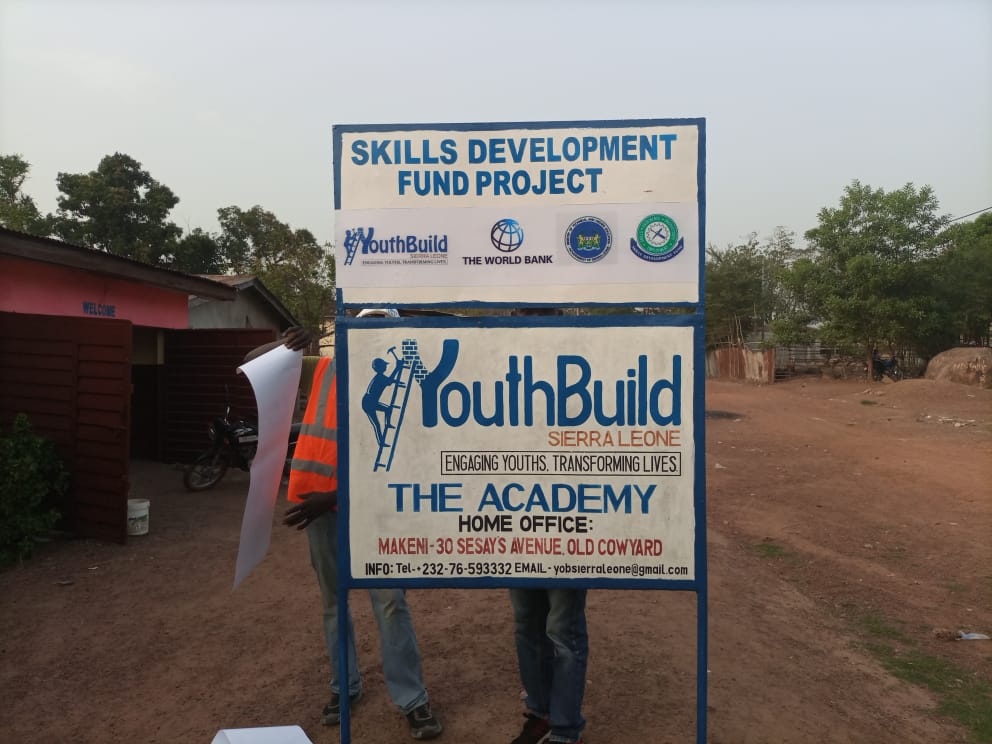 However, Mr Sesay recalled briefly the huddles he had to overcome to get where they are today. YouthBuild-SL ranks as one of the success stories in Makeni, if not the whole region. According to Mr Sesay, the aim of the organisation among others, is to help transform the lives of especially young people from deprived backgrounds, give a second chance to school drop outs, encourage them to achieve their full potential, and divert them from the hazards of substance misuse and other undesirable aspects of youth culture. Mr Sesay reiterated his belief that “it takes a village to raise a child”; meaning that an entire community of people must interact with the youth for those children to experience and grow in a safe and healthy environment. He believes that giving the youth a sense of purpose is one of the greatest gifts that can be bequeathed to the next generation.

What happens in Makeni tends to stay in Makeni, but YouthBuild-SL has captured the admiration and good will of many people; and especially some in the Diaspora. As a voluntary sector, it depends largely on donations, promotions and contributions from private people and organisations to function. Thanks to the donations and support from organisations like; World Bank and MHTE-SDF, UNDP-SGP, Immaculate Healthcare Services, Be Rose International Foundation, The Holy One Evangelical Outreach Restoration Ministry, all in the States. Jesus Film Church Planting Strategy in Canada, Australian Leadership Institute in Australia, Kacho Solutions (SL) ltd, Girl Child Network and many more, YouthBuild-SL has continued to grow. There is a host of people from UK and largely from USA, who have made and continue to make personal donations in cash and kind. The headquarter in Makeni is fast becoming a place of pilgrimage in their bucket list of places to visit. Donations of school items like computers and many more come from patrons locally and in the diaspora. Donations from people like; Mrs. Mary Bynum, Mr. Kai Tiafoe, Mrs. Fatmata Soloku Kandeh, Madam Yayea Gassama, Mr. Ishmeal Gassama, Rtd. Col. Idriss Kamara, Dr. Sesay (Junior Lamin), Mr. Amara Nabbie (Amnab), Madam Zainab Yillah (Anti Bullying Squad), Mrs. Rebecca Yongawo, Madam Louisa Maddie Bangura, Madam Ashma Borbor Jalloh, Mr. Nafai Bah, Hon. Edward A. Soloku, Ms. Hon. Segepor Solomon Thomas and many more have made personal financial contributions as well.

The success of the organisation has not escaped the attention of Mr Kalilu Totangi, Director of Civil Education and Mr Mohamed Rado Swaray, Minister of Information who paid a courtesy visit recently to YouthBuild SL. Mr Totangi congratulated Mr Robinson Sesay on his initiative and called on other Sierra Leoneans to undertake such support. He acknowledged that though it is the responsibility of the government to provide education for the people, initiatives such as one taken by Mr Sesay are vital in promoting and contributing towards the overall goals of the Free Quality Education programme; as a complimentary measure. Mr Totangi further said that Mr Sesay’s initiative was a good example of “ask not what your country can do for you-ask what you can do for your country”. Mr Swaray also acknowledged the example set by Mr Sesay to contribute and give back to his country.

It must be recalled that Mr Sesay was one of the people who were very vocal about the tragedy in Makeni. But unlike many, he maintained that clamouring for “Makeni Lives Matter” should be demonstrated by actions to address the deprivation in the area. He urged other well-meaning Sierra Leoneans to emulate in helping develop the country.  Mr Sesay pledged to continue with the project and expressed his sincere gratitude to all those contributing in various ways to make it a success. He paid special tribute to those in the diaspora for giving back to their communities. Mr Sesay also joked that there are many ways to show that “Makeni Lives matter”; supporting the youth to improve their lives, give them a sense of purpose, direction and a path to a career are just a few of the ways we can all make meaningful contributions to our communities. He concluded that his belief is that   "Give a man a fish, and you'll feed him for a day. Teach a man to fish, and you've fed him for a lifetime."