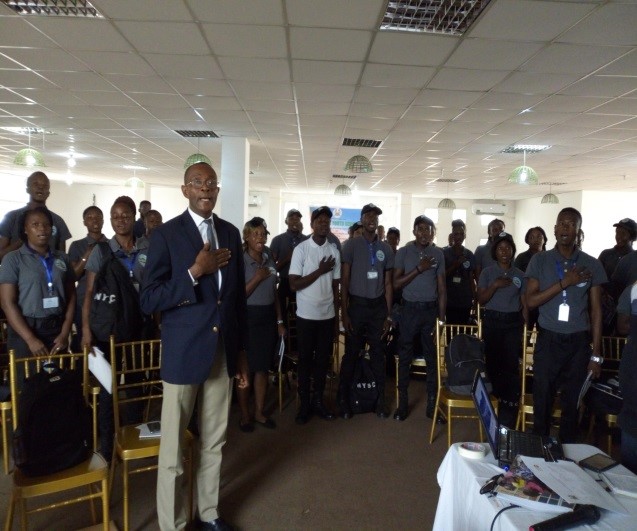 With support from the United Nations Population Fund (UNFPA), the National Youth Service (NYS) yesterday trained over fifty corp members on sexual reproductive health and rights and the demographic dividend at the City Plaza, Wilkinson road in Freetown.

In September, 2018, Sierra Leone’s Vice President Dr. Mohamed Juldeh Jalloh inaugurated the first batch of 200 national youth graduate corps at the Peace Keeping Military Center at Robgangba, Hastings in the east end of the country’s capital. The corp members were deployed across the country after completing 21 days rigorous training in fulfilment of the National Youth Service Scheme.

In his opening remarks, the Executive Director of NYS, Pateh Bah, said he was elated to meet again with the young graduates since their deployment in their various places of work. He urged them to brace up and take advantage of the capacity training in order to become ambassadors of change in their communities.

He noted that the capacity training day coincided with his birthday and therefore used the platform to glorify God and thanked UNFPA’s  management for the support to the NYS. He appealed that the training should be rolled out across the country so that those corp members currently deployed in the provinces will immensely benefit.

“I have been a volunteer all through my life and I will die as a volunteer,” he said, whilst saluting the graduate corps for their gallantry and sense of patriotism to engage in a year of dedicated national service.

In his power point presentation, the Director of Programme, Training and Recruitment at the NYS,  Sylvester A. Bewie said demographic dividend is the economic growth potential that can result from shifts in a population’s age structure, mainly when the share of the working age population, that is 15-64, is larger than the non-working age share of population.

According to him, the lack of relevant skills will limit the capacity of young people. He added that for economic growth to take place there is need for a skilled labour force and the appropriate working conditions.

Ministry of Health and Sanitation’s National Secretariat Coordinator, Patricia Bah, encourages the corp members to serve as ambassadors to preach against adolescent pregnancy and child marriage in their respective communities. She further noted that parents should start educating their children about sex and sexual education as early as seven years.

One of the participants, Hannah Yalie Kamara, currently attached to the Ministry of Foreign Affairs and International Cooperation commended the UNFPA-Sierra Leone country office, for the support to the NYS since its establishment in 2016.

She said the training was timely and appropriate, noting that teenage pregnancy and early marriage are growing concerns to the Government. She described them as social challenges that will undermine national development.

“I am proud to be among the first batch of young graduates to be enlisted into the National Youth Service Scheme,” she said, adding that, “the Government should prioritize NYS and I am now calling on all donor partners to support the NYS to effectively carry out their constitutional mandate/s.”