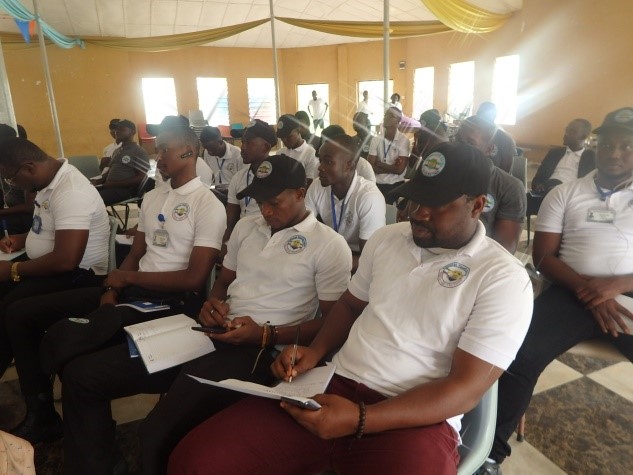 With support from the United Nations Population Fund (UNFPA), the National Youth Service (NYS) has embarked on capacity building training on sexual reproductive health and rights and the demographic dividend.

The training started in Freetown with over fifty graduate corps and has been cascaded to the provinces to enrich their knowledge and further encourage the corps members to become ambassadors in their respective communities.

It could be recalled that in September, 2018 the Vice President Dr. Mohamed Juldeh Jalloh inaugurated the first batch of 200 national youth graduate corps at the Peace Keeping Military Training Center at Rogbangba, Hastings in the east end of Freetown.

The graduate corps were deployed across the country after completing their 21 days rigorous training in fulfilment of the NYS scheme.

In his opening remarks in Bo at the District Council hall, the NYS Director of Communications, Elkass Sannoh, said the graduate corps are a living testament in fulfilling the dream of the country’s first Prime Minister, Sir Milton Margai. According to him, the enrollment of the first batch has proved that patriotism is alive.

He said the NYS history cannot be complete without them, adding that their sacrifices and selfless dedication can hardly be forgotten.

In his Power Point presentation on Demographic Dividend, the NYS Director of Programme, Recruitment and Training-Sylvester A. Bewie, said demographic dividend occurs when the working age population (15-64) is greater than the non-working age population. He added that harnessing the full potential of young people can make change happen quickly.

According to him, to achieve the country’s demographic dividend we need more people to be empowered, educated and employed.

He catalogued the four pillars of the demographic dividend as employment and entrepreneurship, education and skills development, health and well-being, rights, governance and youth empowerment. 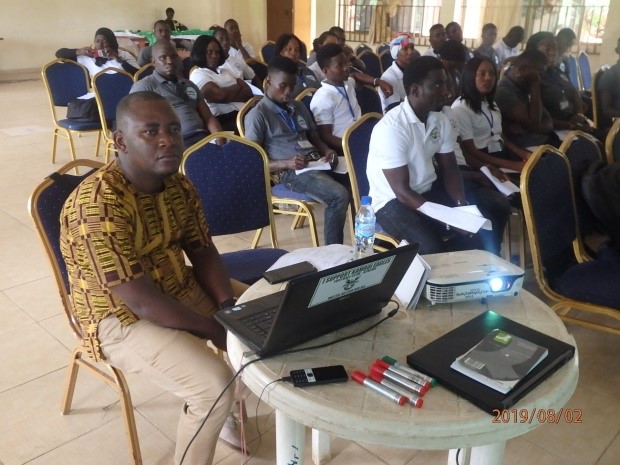 In Lunsar, Northern part of the country, the District Health Management Team, Sister-Zainab Kamara-Bah, speaks on the national strategy for the reduction of adolescent pregnancy and child marriage.

The DHMT sister affirmed that the strategy is to fulfill the needs of young people for a brighter future. She disclosed that adolescent pregnancy and child marriage pose a dire threat to girls. She went further to state that preventing young girls from realizing their full potential in all aspects of development is another challenge.

Sister Kamara-Bah quoted the First Lady, Mrs. Fatima Maada Bio who said that child marriage is wrong and must end at once.

One of the participants, Ishmael Kamara, with call-up number 151 said apart from the capacity building training which has positively impacted him, the NYS has served as a vehicle for national cohesion in the country.

He said even though he hailed from the North, his stay in the South has not been influenced by any negative factor such as tribalism.

Speaking on Gender Based Violence, the Communications Specialist from the Rainbow Center, Agatha Levi defined  gender based violence as any act that is perpetrated against a person’s will and is based on gender norms and unequal power relationships. She further averred that this act can be physical, emotional, psychological or sexual in nature, and can take the form of a denial of resources or access to services.

She said gender based violence is prevalent in every society and is often experienced by women and girls because of their socially subordinate status in relation to men and boys.

Kamara said he is proud to be among the first batch of graduate corps to be recruited by the NYS. He appealed to President Julius Maada Bio to pay attention to the scheme with huge financial support. He said the training was timely and called on donors to support the NYS to be able to roll out more capacity development trainings.

Share this on WhatsApp
About CEN 690 Articles
Critique Echo Newspaper is a major source of news and objective analyses about governance, democracy and human-right. Edited and published in Kenema city, eastern Sierra Leone, the outlet is generally referred to as a level plying ground for the youths, women and children.