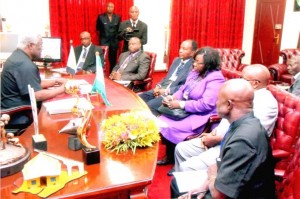 Accompanied by Commissioners, Executive Secretary and Programme Manager, the Chairman of the National Commission for Democracy (NCD) Dr. Abubakar Kargbo as part of its constitutional mandate, has on Monday 4th March 2013 presented its annual reports for the years-2010, 2011 and 2012 respectively to His Excellency the President Dr. Ernest Bai Koroma at State House.

In his address to HE President Dr. Ernest Bai Koroma, Chairman of the NCD, Dr. Abubakar Kargbo on behalf of commissioners and Staff, expressed his profound gratitude for the opportunity granted the commission to present records of its work.

Dr. Abubakar Kargbo informed President Koroma about their experiences and successes in providing civic education for the electorate during the November 17th 2012 election, adding that the NCD is going through transformation.

“Your Excellency may recall that just over two years ago on the 3rd of December 2010 in your wisdom deemed it fit to appoint myself and Mr. Bai John Conteh as the Chairman and Commissioner North respectively. This was at a time when in all indication the commission was going through enormous challenges and the need to inject it with new blood to revitalize such an important governance institution was crucial for the political education of the Sierra Leone public. This cannot be overemphasized”, he said.

The NCD Chairman requested President Koroma’s divine intervention for the allocation of adequate subvention to the commission, and pointed out that his team of commissioners and staff is working hard. Dr. Kargbo recalled that when he took up office, he ensured that all hands were on deck, and the commission was blessed with two civic education projects that were funded by ENCISS and UNIPSIL, which according to him made the existence of the Commission felt right through the length and breadth of the country.

While the NCD is rapidly winning the admiration of the world, political observers both local and international have commended Sierra Leone for making tremendous strides in promoting democratic good  governance under the visionary  leadership of President Koroma.

To that end, Chairman Kargbo, said, “Under your leadership you have brought life once again to governance institutions characterized by the adoption of new legislations aimed at promoting efficiency and sustainability of the governance environment in Sierra Leone.”

The NCD Chairman further informed President Koroma that new governance institutions have been established and are today very active in their respective campaigns to further enhance the governance process, which has gone a long way to ensure predictability which is a crucial element for any governance environment.

He said that the aftermath of the November17th 2012 elections indicated trends and tendencies that do not augur well for the promotion of democratic good governance in Sierra Leone.

Chairman Kargbo also recalled that over the years, post elections scenario in the country have been characterized by a voting pattern that manifested glaringly, ethnic and regional parochial interests thus, polarizing the Sierra Leonean society, coupled with the tendency also for the losers resisting accepting defeat characterized by openly inciting followers to develop a psyche of rebelliousness thus, violating of the Rule of law.

He said that such unpatriotic attitudes do not foretell well for the promotion of democratic good governance that will lay the foundations for socio-economic and political development on the one hand; and national unity and cohesion on the other hand.

“This scenario could also be seen as a time bomb that will explode thus, putting the country in mortal danger. Without any gain saying Sierra Leone as a multi-ethnic society which to a very large extent polarized by non tolerant party politics, is badly in need of National Unity and Cohesion if it is to safeguard the enormous gains already achieved over the years even under your leadership”, he observed.

Dr. Kargbo said that in furtherance of  the zeitgeist of all progressive Sierra Leoneans under the visionary leadership of President Koroma, to enhance peace building and socio-economic development in the country, the commission has decided to organize a Three Day Consultative Conference at the Bank of Sierra Leone Complex, starting 20-22of March 2013 with a view to critically taking a look at key national issues of crucial importance that to a very large extent hinged on the fundamental overhaul of the body politic. This decision, Dr Kargbo added, came as a sequel of the just concluded elections of November 2012.

The conference, he said will be aiming at ‘Building a United and Cohesive Nation', adding that it will also provide forum for debate on the weak indicators that characterized areas as the rule of law and social justice.

Dr. Kargbo said that the conference will also help raise awareness on current campaign and programmes on reconciliation, respect for the rule of law, national unity and cohesion undertaken by democratic institutions and other social partners.

The strengthening of national effort and initiatives between governance institutions to build national unity, social justice and identity anchored in reconciliation and respect for the rule of law also formed major component of what will be covered by the conference, disclosed by the NCD Chairman. In that regard, the Chairman requested His Excellency to help the Commission receive its first quarter (January – March 2013) subvention plus a little more addition to ensure the success of this all important consultative conference

He also indicated the Commission’s desire for a review of the Act of Parliament established the Commission in 1994 for which initial discussions have already started with the Law Reform Commission.

Receiving the three documents, President Dr. Ernest Bai Koroma expressed his warmest delight for the updated Reports with the Commission having taken the responsibility to clear the backlog, saying that the documents will be soon be tabled before the House of Parliament.

President Koroma described the NCD’s role in the present democratic dispensation as very important, adding that the Commission has raised a very high profile for its self through its activities with the last two years. He noted with profound acknowledgement the Commission’s extensive civic education campaigns it provided for the electorate during the November 17th 2012 elections. President Koroma observed that such endeavours have not gone unnoticed and must serve as motivation for staff and commissioners to do more in future.

He further commended the Commission for having already put a programme in place to address issues exposed during the course of the November 17th Election. He described these issues as being very important.

He reassured the NCD that work will soon commence on the review of the 1991 Constitution of Sierra Leone, which according to the President, will include a national debate wherein every Sierra Leonean will be given the opportunity to participate, so that the necessary areas of modification will be addressed. He said the process will be all inclusive and he expects the NCD to play a very key role in that direction.