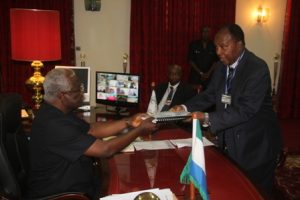 Speaking at the ceremony, President Koroma expressed delight for the updated Reports, noting that the documents will soon be tabled before the House of Parliament as the NCD’s role the democratic dispensation is very important and critical.

President Koroma said the commission has been given a very high profile, through the civic education it provided for the electorate during last November elections, adding that the job done will further motivate staff of the commission to do more work.

He disclosed that work will soon start on the review of the 1991 Constitution of Sierra Leone, which according to him, will be followed by a national debate wherein every citizen will have an opportunity to participate, so that the necessary areas of modification will be addressed.

He acknowledged the challenges faced by the commission, pointing out that it is a great and urgent responsibilities.

Earlier, Chairman of the NCD, Dr Abu Barkarr Kamara thanked President Koroma for granting the commission the opportunity to present records of their work to him and informed the Head of State about their experiences and successes in providing civic education for the electorate during the past elections.

He said the commission is going through challenges and requested President Koroma’s intervention for the allocation of adequate subventions to the commission, adding that his team of commissioners is all working very hard together.

He advocated for a review of the Act of Parliament establishing the commission in 1994.

In a related function, the Indian High Commissioner to Sierra Leone, resident in Accra, Ghana has bid farewell to President Koroma after successfully serving to enhance and consolidate bilateral ties between the two countries during his tenure of office.

“I tried my bit to further enhance the bilateral relationship between Sierra Leone and India under the framework of the South-South Corporation”, said Rajinder Bhajat, the outgoing India High Commissioner to Sierra Leone.

Mr. Bhajat said India has made a series of interventions ranging from education, infrastructure, health, information, communication and technology among other significant sectors of governance, all in support of the ‘Agenda for Change’, moving to the ‘Agenda for Prosperity’.

In response, President Koroma thanked the outgoing Indian envoy, stating that the Indian government and people have been very supportive of Sierra Leone even before he took up office as Head of State.

Further acknowledging efforts made by India in consolidating bilateral ties between the two countries, President Koroma spoke of the Indian government’s intervention in improving access to safe drinking water to the people of Sierra Leone.

He said government is poised to further develop young people by making them more competitive.

“We believes we are strengthening the relationship under the framework of the South-South Corporation and you go and continue to tell the new story of Sierra Leone to the people and government of India”, he said.