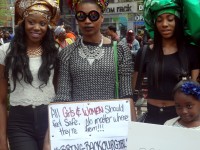 Hundreds of Africans including Nigerians and sympathetic New Yorkers joined in solidarity on Saturday at Union Square Park in downtown Manhattan, to pressure Nigerian authorities to rescue more than 200 girls abducted by militants with the Islamic terrorist network Boko Haram since April 15 from their Government Secondary School in Chibok, Nigeria.

All through the rally, protesters chanted in unison “bring back our girls” as others waved placards with messages like “All girls and women should feel safe, no matter where they are from.”

“Women and children have always been the core victims of extreme violence during times of national conflicts, particularly sexual violence. From Nigeria to the Congo to Syria, Iraq- women cannot continue to be used as sexual instruments of wars,” says Yoliswa Cele Luthuli, a New York resident and executive with the South African Imbizo Host Committee – NY.

Cele Luthuli, added, “Today is about speaking out for the world's most vulnerable.  There can be no real female empowerment without a stronger international emphasis on swift conflict resolution and more importantly a deeper focus on peace sustainability.”

According to Channel 4 News, the intermediary also said Boko Haram threatened to kill the rest of the remaining girls if the Nigerian military tries to free them.

Nigeria’s President Goodluck Jonathan on Friday constituted a Presidential Committee to help rescue the abducted girls after persistent criticism by parents and relatives of the victims.

US Secretary of State John Kerry in a statement said the United States government would provide aid to rescue the girls if necessary.

Still, the question many protesters at Saturday’s rally and sympathizers are asking on social media is why mainstream media hasn’t provided coverage focused on searching for the missing girls as they did for the tragedies of the missing Malaysian flight #MH370 and the South Korean ferry accident, respectively.

Is it because the more than 200 abducted Nigerian girls are African children?