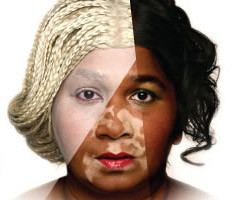 The fake face of a bleached woman

According to the World Health Organisation (WHO), 77 percent of women in Nigeria use skin-lightening products, the world’s highest percentage. That compares with 59 percent in Togo, and 27 percent in Senegal. The reasons for this are varied but most people say they use skin-lighteners because they want “white skin”.

In many parts of Africa, lighter-skinned women are considered more beautiful and are believed to be more successful and likely to find marriage.

It’s not only women though who are obsessed with bleaching their skins. Some men too are involved in the practice.

Lightening creams are not effectively regulated in Nigeria where even roadside vendors sell tubes and plastic bags of powders and ointments from cardboard boxes stacked along sidewalks in market districts. Many of the tubes are unlabelled as to their actual ingredients.In a market in Lagos, Nigeria’s commercial capital, business is booming for shops selling skin-lightening products. Both local and imported products line the shelves of Rashida Lawal’s cosmetics shop.

“About 90 percent of my clients come asking for skin whitening products,” she told Al Jazeera. “I sell it to them and give advice on what product is best for them and how to use them.”

She says most of her customers are in a great haste to lighten their skin.

“Taking the color of your skin to different colour has to be gradual. It’s not something you decide one day that ‘I want to be fair, I want to be like Michael Jackson and you become Michael Jackson all of a sudden’. That is why we have to advise them first before selling it to them” said Lawal.

Rashida and her staff also mix different ointments and creams for customers “depending on the desired level of lightness”.

Famous Nigerian Musician Femi Kuti says the use skin-lightening products have given rise to their own terminology.

“When the bleaching propaganda got so negative, they had to come up with toning. Bleaching sounds too hard, now it’s toning. I don’t bleach, they say, I tone!”

“They think bleaching is gege,” he told Al Jazeera, using a Nigerian term for cool.

Femi attributes skin bleaching to a feeling that foreign products and images must, by definition, be good.

“An African will prefer to be called John-Philip. If you said your name was Chukwu Emeka Afongkudong they will say you are from the village. You are backward. How can you have such a name? We really look down on our culture and heritage instead of being proud of it,” he laments.

Skin bleaching comes with hazardous health consequences. The dangers associated with the use of toxic compounds for skin bleaching include blood cancers such as leukemia and cancers of the liver and kidneys as well as severe skin conditions.

The two most common ingredients used in bleaching products are hydroquinone and mercury.

Ayobode Williams, a medical doctor, says the skin bleaching agents have both internal and external effects on those who use them.

“Systemically it causes things like kidney failure because of the mercury in some of the products and it also causes eczema, skin pigmentation among a host of other infections,” he told Al Jazeera.

Dr Williams warned that sustained use of bleaching agents could cause even cancer.

Yet few seem to pay attention to these dangers. For those who bleach, staying black is not beautiful at all.