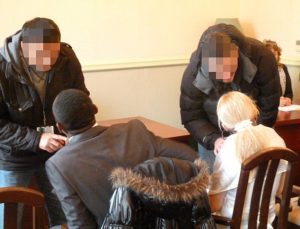 Fake couple: Nigerian student Chinedu Amadi, 27, and his fake bride Szilvia Basco-Porkolab, 38, pictured being arrested by Home Office investigators in the middle of a sham wedding ceremony at Leicester Registry Office. A suspicious registrar contacted the Home Office who had investigator lay in wait for the pair to arrive for the sham wedding

As a loving couple about to embark on married life, it helps if the bride-to-be knows her fiance’s name.
Unfortunately when Nigerian Chinedu Amadi turned up at a register office to book a wedding, his Hungarian ‘partner’ failed to get to grips with his.
Staff, who were already suspicious, became more concerned  when Amadi, 27, struggled to remember his own address.
Their fears were confirmed three months later when Amadi arrived for his wedding in January not only an hour late, but with a different woman.
Registrar Debra Webster, having noticed the mysterious change of bride, told them their ceremony would have to be postponed because of Amadi’s lateness.
And when the groom returned to the Leicester register office again – on Valentine’s Day – he was accompanied by a third woman, Hungarian Szilvia Basco-Porkolab, 38.
As waiting immigration officials swooped to arrest the pair, Amadi said she looked different because she had previously worn a wig.
Meanwhile Basco-Porkolab insisted she was there only as a witness, even though she was wearing a wedding dress.
Further investigations revealed that Amadi had paid a mystery ‘fixer’ £5,000 to arrange a bogus wedding to an EU national. 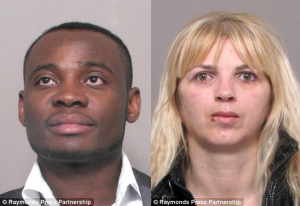 Basco-Porkolab had a history of participating in sham weddings. She had previously married another Nigerian, Ikechukwu Egbe, at Gretna register office in May last year. Egbe, 33, was later arrested at his Leicester home.
Meanwhile Amadi’s first bride, ‘Rita Durgos’, whose real name was Rubin Durgos, 39, of Coalville, Leicestershire, was also arrested.
All four were jailed on Thursday at Leicester Crown Court.
Officials have been unable to trace the second bride.
Prosecutor Neil Bannister said: ‘The offences came to light with the intended marriage, initially, between Durgos and Amadi.
‘Durgos struggled to pronounce the first name of Amadi and he struggled to remember his address. Mrs Webster (the registrar) also thought the couple were being excessively affectionate and gained the impression they were trying too hard to demonstrate they were a couple.’
Basco-Porkolab, a mother of two from Leicester, admitted two counts of conspiracy to breach immigration laws relating to sham marriages, and was jailed for 34 months. 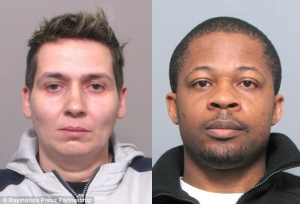 Co-conspirators: Ikechukwu Egbe, 33, pictured left, was jailed for 30 months after being involved in another sham marriage with Basco-Porkolab. Rubin Durgos, 39, pictured right, was also jailed for 20 months for posing as a bride for sham marriages

Amadi, from Gillingham, Kent, admitted a similar charge and was jailed for 20 months. Like Egbe, he had been in the UK on a student visa.
He hoped that marriage to a European citizen would assist his attempts to gain long-term residency in Britain.
Egbe was convicted of conspiracy, and jailed for 30 months.
Durgos, who came to the UK in 2004, also admitted conspiracy, and was jailed for 20 months.
A source close to the case said: ‘It was a farce from start to finish with three different brides and a groom who bowled up an hour late to his own wedding.
‘I don’t know how they thought they would get away with it.’