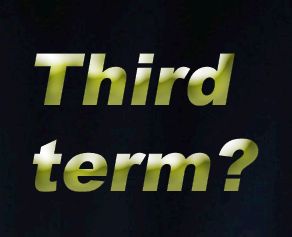 According to Section 46 (1) of the 1991 constitution of Sierra Leone “No person shall hold office as President for more than two terms of five years each whether or not the terms are consecutive.” “Therefore it is completely out of place, for people to think that President Ernest Bai Koroma is seeking a third term by directing the activities of the Constitutional Review Commission.” Abdulai Bayraytay, Office of the Government Spokesman of Sierra Leone (By: SEM Contributor on March 13, 2014.) In June 11, 2013, I reported on an interview that was reportedly quoting President Ernest Bai Koroma as saying that, “I will retire peacefully to my village in Bombali, eat my native fish, cassava or rice every morning whilst relaxing under the trees”. The President of Sierra Leone, Dr. Ernest Bai Koroma was reported as making these remarks in an interview, following the TICAD V conference in Japan.

If these remarks and quotes are anything to go by, our abled and indefatigable president was not only going to retire as the 1991 constitution dictates, but was going to do so gracefully and peaceably as demonstrated by his predecessor, the late Ahmed Tejan Kabba ( RIP). The issue of our constitution has been a subject of discussion for some time in our country. It all began when the Government initiated a constitutional review, and since then, many have viewed this with suspicion. The review of the 1991 Constitution was a recommendation by Dr. Peter Tucker, who led the team that authored it.  “The Constitutional Review Commission is made up of seventy people drawn from all works of life including political parties that have no representation in parliament:  and the government is not in any way serving as a compass to direct its activities.

Some schools of thought have questioned the timing of the constitutional review; that it was not initiated until when the President was into his second term of office. The rumour mill has since been in overdrive, leaving many to conclude that the whole purpose of the review was to fidget the constitution, so as to allow for an extended term of office for our president. In the meantime, our country has seen our Vice president disrobed in what many have described as unconstitutional. The high court ruled in favour of the APC and the president, citing Executive Powers as the right to unseat an elected Vice president.

With the rumour vendors in full flow, we have witnessed how our political heart strings have been toyed with the idea of a 3rd term for the President. This lead to slogans like “After you Na you”. Those opposed to the idea of a 3rd term settled for “After you na Gbagbo”; which seemed to be a chilling reminder of what happened to Laurent Gbagbo of Cote D’Ivoire when he tried to hang on to power, irrespective of what was largely declared as a free and fair election. The irony is that our President, Dr. Ernest Bai koroma was heavily involved and very instrumental in trying to convince Laurent Gbagbo to accept the will of the people. The outcome of Laurent Gbagbo’s recalcitrance is now history; though the events leading to that are one that any country can ill afford. It is not therefore understandable that many people are surprised that people are even suggesting our president has the slightest intention to run for a 3rd term.

The declarations made about such a notion were met with strong denials from official and unofficial sources reportedly close to the powers that be; as quoted above. Judging from the political barometric readings, it was easy to see that opposition to the idea of a 3rd term was emphatic in most walks of life. Unfortunately, our country was struck with the deadly Ebola epidemic, which seemed to push all political discussions onto the back burner. It was now a matter of life and death, irrespective of one’s political configuration. It was a matter of “all for one, and one for all” as the Government tried to get all hands on deck to fight this deadly plague. The Ebola outbreak did not pass without its own share of allegations of corruption. Thankfully for our country, this is now history; I mean the plague.

Our attention has now been focussed on the things that seem to matter for many people; political gymnastics. This time, the wordsmiths have gone to work and the idea of a “3rd term” has undergone some alchemy or semantic osmosis, to become “more time”. The social media has been awash with images of people in T-shirts, with placards and in gatherings, all reportedly calling for “more time” for the President in office. Those in the business of rumour merchandising are claiming that as a result of the Ebola outbreak, the President and the Government have been severely hampered in their efforts to take us from the land of “Agenda for change” on to the promised land of “Agenda for prosperity”.

In a recent article in the pro-government Cocorioko Newspaper, it stated that “Sierra Leoneans  –Not President Ernest Koroma and the Government–are asking for the President to be given the opportunity to compensate for lost time,  caused by the Ebola outbreak,   to complete his flagship projects” . As if to justify the argument for “more time” the publisher and chief executive officer kabs kanu, kindly reminds us that “SLPP asked for More Time in 2000 and got it; so why are SA. Leoneans being demonized now for demanding the same for the APC? (December 14, 2015). You can’t help but love the logic here.

The writer goes on to lecture us on semantics that, “MORE TIME is not a Third Term request for the President and the noise-makers know this because President Koroma has made it unequivocally clear that he is not interested in and will not be seeking a third term .What the Sierra Leoneans are asking for is that, because the Ebola outbreak put the government behind in the implementation of the Agenda For Prosperity, the President be given the opportunity to make up for lost time. Some unofficial sources say that the Sierra Leoneans are suggesting that the elections be held in 2020, instead of 2018. This is not a government request at all and no official of government has expressed support for it in public”.

So does that mean that the APC party or the government is making a tacit admission that there is no one qualified or equipped enough to take the reins of power? Is there no one capable to bring the president and the government’s projects to fruition? Should the public see these reasons as a vote of no confidence in those that are supposed to represent us? Should the constitution of our country be ripped up at the whim of any individual? Does this situation not qualify for another constitutional gymnastics?

Let us remind ourselves that the strength of any constitution lies entirely in the determination of each citizen to defend it; and it is only if every single citizen feels duty bound to do his share in this defence, that the constitutional rights are secure. Failure to do so will make our constitution the ultimate tyranny. “There is always an unstable balance point with no limitations with constitutions” (F. Herbert). We know that constitutional democracy is no romantic notion. But it’s our defence against us, the one enemy which might defeat us. As a nation, we must strive against the temptation to interfere with anything in the constitution; for it is the only safeguard of our liberties. In as much as I would rather have the President for life, in view of his real and perceived achievements, it is the principle of toying with this safeguard that seems to generate a rancid taste in some political circles. Some will say that a “3rd term” or “More Time” is pragmatic but unconstitutional, while others may prefer results to principles.

In our efforts to strike a balance between the needs of our country and the constitution, it would be wise to thread carefully. Unfortunately, some people have opted to insult our collective intelligence as a nation, and as a people. President Koroma has not made any official declaration about his request or desire for a“3rd Term or More Time”. The closest I have seen him come to do so was on the social media (Facebook), where he posed with someone wearing a T-shirt emblazoned with the logo “More Time”. In the meantime, the rumour on this issue may be seen as political brinkmanship by the government to test the water. I am of the opinion that if the President can come out and make such a declaration, may be, just maybe, he would get a lot of sympathetic ears. If President Koroma wants “more Time” or “3rd Term”, there can be no better person to put this case across to the people of Sierra Leone. He has the opportunity to tell the country why he wants “more time, a 3rd term, Extra time, Injury time or Penalties”. He has the opportunity to tell us about his hopes, dreams, aspirations and projects for our beloved country. But leaving this in the hands political griots, whose sole aim is to discuss such an important matter, laced with party political fervour can only stoke up dissent, confrontation and misunderstanding; which might turn out to be unhelpful, to all intents and purposes.

It is unfortunate that some people have started using the situation of what is going on in Burundi as a gentle reminder of what may befall a nation, when their leaders try to hang on to power. In the case of Burundi, which saw one of the deadliest sides of mankind’s penchant for barbarity, the ethnic factor played a significant role. Like Burundi, Sierra Leone had its own share of mankind’s depravity. Although many tried and failed to give the war a tribal colouration, the sense of unity in our country resisted the temptation. No one in their right minds would pray for a repeat performance. Nevertheless, our President and the Government owe it to the people of Sierra Leone, to ensure that we continue to live in peace and harmony. More Time or 3rd Term, I know where I stand. But I will wait to hear what my President has to say, if he chooses to ask for it. No legacy is as rich as honesty. True leaders don’t invest in buildings. Jesus never built a building. They invest in people. Why? Because success without a successor is failure. So your legacy should not be in buildings, programs, or projects; your legacy must be in people. Sometimes, leadership is taken, not given; because it is the power of one harnessing the power of many.

Don’t forget to turn the Christmas lights off when you leave the building.

Wish you a Merry Christmas and a happy New Year to all.