Saturday 13 November 2021 was a day of relief for families of the Wellington fire victims as Nyali Foundation collaborated with Abu Kai to make a huge donation of 100 bags of rice to the families in need.

Presenting the donation to the Chief of the affected area, Pa Alimamy Kargbo, Founder and CEO of Nyali Foundation, Mahawa Sandi said the Foundation is a charity organization geared towards the development and well-being of the less privileged with emphasis but not limited to children. “The charity,” she added “was formed to encourage and teach my daughter, Leila Nyali Sia the art of giving, and to give hope to those who doesn’t have; and may have been abandoned by society. At Nyali, our manta is: Do small things with great love…always – everything we do is done out of love, with love and for love,” she asserted.

She disclosed that with the unfortunate fire incident, the Foundation reached out to few of her friends who contributed towards the purchase of bags of rice to be donated directly to the families of the fire victims.

Madam Mahawa Sandi, thanked the Chief and his people for their hospitality and expressed her sincere condolence to the victims and their families. She acknowledged that the unfortunate incident affected not only the people residing at Wellington, but affected each and every Sierra Leonean as such an incident was of concern to all and felt by all.

She recalled that after the devastating incident, she had to gather her friends and partners to put financial aid in place for them to sympathize with the victims and their families directly, as that’s the way she was taught by her parents and elders, – to see and feel the emotions of those you are sympathizing with. Madam Mahwa Sandi added that everything happens for a reason, and as someone who is a strong believer in her religion, she encouraged the victims and their families to take things as it is and give God the glory. 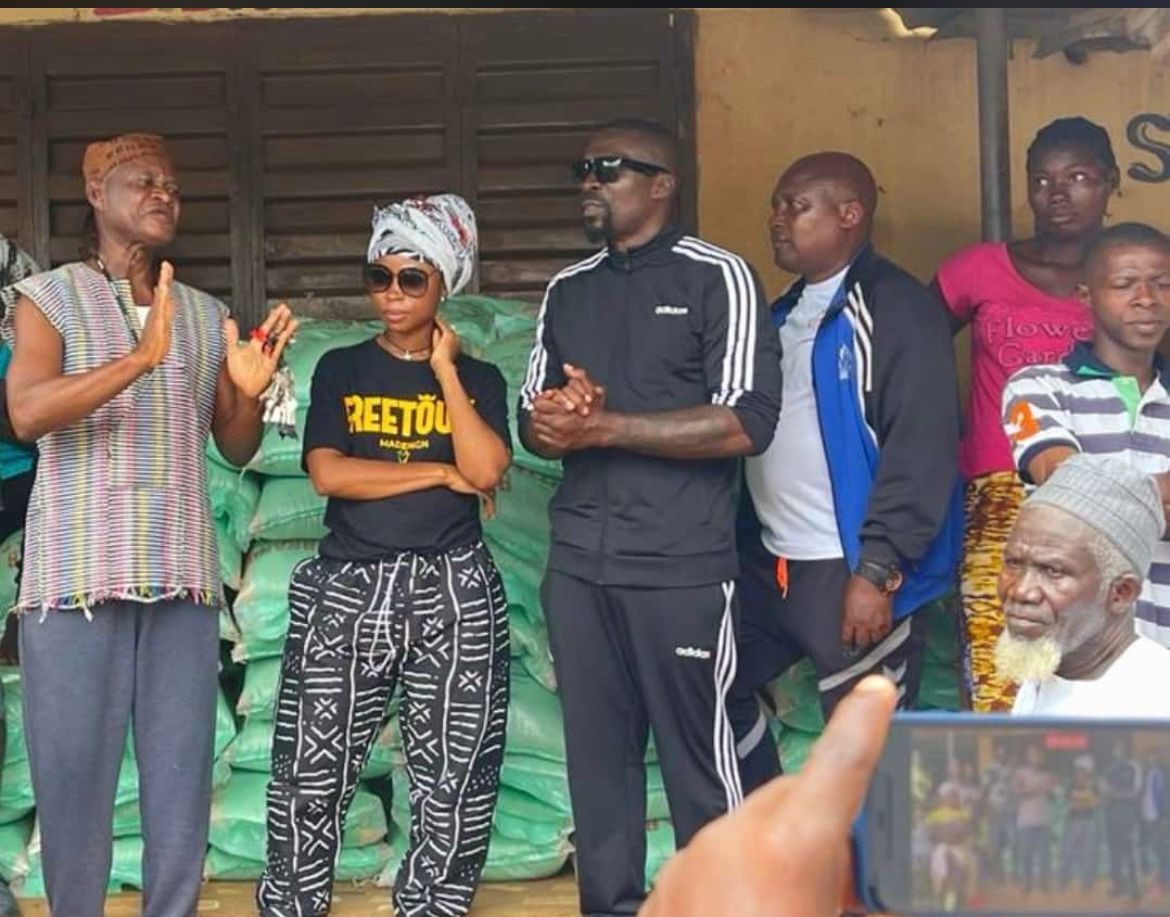 Receiving the 100 bags of rice. Chief Pa Alimamy Kargbo thanked Madam Mahawa Sandi and her team for their visitation. He added that on behalf of the community people and victims affected by the inferno, they will be forever grateful over the thoughtful gesture of Nyali Foundation which is not only recognized by them as community people, but also by God almighty.

Pa Alimamy Kargbo said it is a sad day, and even though the community, victims and their families appreciate the good gesture from Nyali Foundation, their hearts are still heavy as so many of their loved ones died, whilst some are still fighting for their lives. He went on further to say that it is the will of God for such to happen and as humans we must just have to accept things as they are and give thanks to God.

Chief Pa Alimamy Kargbo assured Nyali Foundation and its CEO Madam Mahawa Sandi, that the 100 bags of rice they have received shall be distributed to the families of the affected victims. He sent out strict warnings to those who would want to bring “yukie-yukie” into the distribution of the 100 bags of rice. He went to say that only those affected shall benefit from this donation. He ended by giving his profound thanks and appreciation on behalf of the victims, their families and community to Madam Mahawa Sandi and her delegation, for a kind gesture and hoped that God will continue to bless the Nyali Foundation for their good works.

It could be recalled that Nyali Foundation has been in community development components where they’ve fixed community roads and have installed solar street lights which has increased the hours Okada transportation plies the roads and women feel safer as there are less vagabonds on the roads.