As I sat in my brother’s apartment in Philadelphia, grudgingly watching the launching of the Ahmad Tejan Foundation for Peace and Democracy, I could not help but recognize the dept and double edged ironies that were embedded in the whole ceremony.  On one level, the ceremony was a celebration of the late Tejan Kabba’s legacy, and a show of appreciation by the citizens of Sierra Leone, to not only recognize but also glorify his contributions to our country; and by so doing, earn himself a rare but illustrious page in the annals of our history. Among the numerous accolades and awards accorded to the late man, Tejan Kabba will always be remembered as the father of our democracy; an honour that had hitherto been erroneously attributed to Julius Maada Bio. Without delving into the history books, Kabba will be remembered as the midwife of our embryonic democracy, especially at a time when war and peace were strange bed fellows on our political and social conscience. The late Kabba went to lengths and even dined with the devil, in order to ensure that our country enjoyed a lasting peace; after a devastating war. It is apt that Peace and Democracy were the key words during the ceremony, and therefore not surprising that all the speakers at the occasion were waxing lyrical about the late man; a tribute he deserves in the circumstances.

But what made this launch more telling were the ironies and subtitles that were laced with the whole occasion.  This is glaringly so, when you consider the current situation in our country as the backdrop for this launch. It is an open secret that our country is experiencing one of the most unsettling and testing periods, post the civil war. It is not surprising therefore, that many have gone as far as prophesying an imminent civil war; thanks to our history and the political tension that seem to engulf our 2 main usual suspects. But nothing could be father from the truth. In spite of the comparisons, we had two well armed factions fighting during the war.  The doom merchants have been on overdrive.

Among other dignitaries who graced the launch were former Presidents Obasanjo and Sirleaf Johnson, the latter as the former Head of State of Liberia; a country that regrettably boasts of similar war scars, was the star turn. One of the subplots from this occasion was Ernest Bai Koroma, who was visibly conspicuous by his absence. Interestingly, EBK and Sirleaf reigned over their respective countries in simultaneous time frames. But that is where the similarities end. While Sirleaf has taken a quiet and well earned retirement, EBK continues to occupy the central berth of his party, contrary to his professed promise in 2014; to “retire quietly to my village”.

EBK has remained very active with his party politics since his pseudo-quasi retirement. Most ex-heads of states are usually revered as “elder statesmen”, and as such accorded all the perks that come with the territory.  Many people see EBK’s position as difficult to place, and this has not been lost on the current government, whose dealings with him have been nothing short of confusing. The government appears to be confused between treating EBK as “an elder statesman” or an opposition leader. Say what you want about EBK but he deserves the former title. In spite of all the accusations of corruption, we cannot hide the fact that he presided over one of the most infrastructural developments our country has ever undergone. Yes, I know of the Ebola, the mudslide, Hajj gate, Sam Sumana combolo and rest.  Let’s give him his due.  Interestingly, it remains the prerogative of EBK to choose which status he wants for himself; for you cannot eat your cake and have it back.

But can anyone blame EBK? Many are inclined to place the blame squarely on his shoulders. But how can EBK retire from active politics, when his party ordained him as the chairman for life? By christening him as their chairman for life, many have concluded that it was a demonstration of the hero worship and sycophancy that has dogged and plagued the party right through to its downfall. There are others who believe that, having failed in his bid to entertain the idea of a “3rd term, injury time etc”, EBK is experiencing withdrawal symptoms from political intoxication; hence his recalcitrance to leave the scene.  Many observers are now identifying EBK as the albatross for APC party; thanks to his presence and seeming control that he continues to enjoy. There are also rumours that an internal strife within the APC party is currently brewing, and that a “new generation”, comprising of younger party members has increasingly been calling for an overhaul of the party leadership. Parts of the party constitution, which many feel are tailored to consolidate power in the hands of a few familiar faces have been questioned. Many are now calling for the Real Agenda for Change.

With the recently concluded Bintumani 3 conference, which was conveniently avoided by the APC party, the absence of EBK to honour the late Tejan Kabba has made the case for his proper retirement more apparent. Sirleaf Johnson paid a courtesy call to EBK in his home town in Makeni prior to the launching ceremony. In the meantime, the rumour mill has been on overdrive; that the visit was a quiet word in EBK’s ear to retire from active politics. While Sylvia Blyden made the case for him to be invited to the launch, others say that he turned down an invitation from the government. Take your pick. Irrespective of what you believe, in spite of your political denomination, and despite your tribal propensities, we can all agree that EBK’s fingers on the APC pulse cannot be all plain sailing for the party.

EBK continues to enjoy an unadulterated loyalty and popularity from the party faithful. That in itself is an asset, provided it is used wisely. But does anyone remember the guy that ran as flag bearer for the APC in the last election? This question might sound cynical, but that is exactly the point. When EBK selected Samura Kamara as the presidential candidate for the party, his ordination was met by a nationwide “U sabi am? In political terms, Samura Kamara was a virtual unknown, and it took every political sinew in EBK to introduce him to the country. But by the time the country came to know him, especially as an individual in his own right, and with all his personal attributes, the election was over. Fast forward to 2019. To all intents and purposes, while the party continues to lick its wounds from reality, while it tries to regroup and re-energize its base, the name on the lips of its supporters should be Samura Kamara. That is, if he is the man for 2023. With the exception of a few appearances and utterances, Samura seems to have slipped into relative political obscurity. EBK seems to cast a long shadow over him.

At this point in the political life span of the opposition APC, every political undertaking of the party should be spearheaded by Samura. I don’t profess to be politics friendly but if anything, this is the time that APC should implement the real Agenda for Change. While in opposition, and while serving as the watchdog for the people and as referee for the SLPP, Samura should be mapping out his own alternative vision for the country. You would expect that he should be the axis and fulcrum for the party today.  Sadly, and very sadly, even after 365 plus days since the election, it is still about EBK; a man who did not even contest the last election. Chai. Assuming that Samura will be the presidential candidate for the APC, and I am just assuming here cause you can never second guess the APC chairman, when is Samura going to emerge from the political shadow of EBK? Or are we going to wait for another round of “U sabi am?” before Samura is cut from EBK’s political apron strings? Is Samura also guilty of an inability to cut the political umbilical cord? 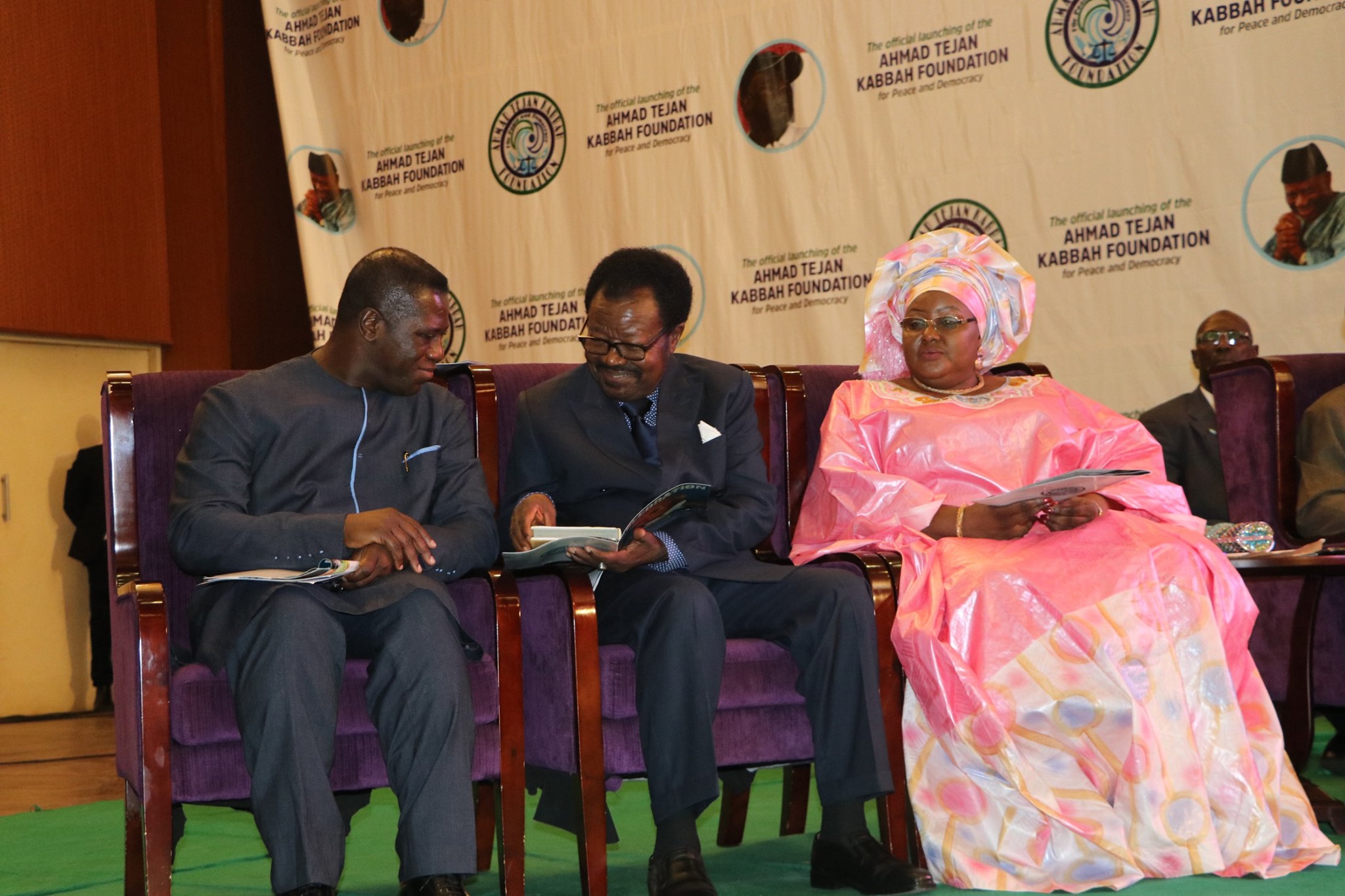 Although many appear loyal to stay the EBK way, there is no doubt that some big hitters are beginning to smell the coffee. Increasingly, we are seeing the Victor Foes and Alpha Khans of the APC making a dash for the door. But before you misunderstand me, lets clear this point; cooperating with the opposition for the benefit of a country is not tantamount to abandoning your party. It is a synonym for common sense and patriotism. And that is where the SLPP might be tripping the APC. While the APC continues to accuse the SLPP of tribalism, regionalism and all the isms available, the SLPP on the other hand has successfully created situations whereby the APC has been made to look like the party that supports corruption, the party that does not want peace, and the party does not want the SLPP to successfully govern. Despite the criticism that has come his way, EBK has presided over some good things in our country. Under normal circumstances, he deserves to be regarded as an “elder statesman”. But until EBK decides on which side of the fence he wants to occupy, many will struggle to place him.

The late Ahmad Tejan Kabba got an added recognition which many feel was long overdue. Sadly, the man who succeeded Pa Kabba did not grace the occasion. If you are looking for ironies in life, look no further.

Our Lives Begin to End the Day We Become Silent about the Things that Matter (M.L. King)