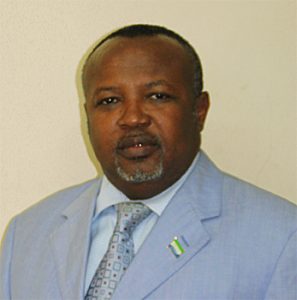 STATE HOUSE, Freetown, May 24, 2013/– The Government of Sierra Leone through the Ministry of Works, Housing and Infrastructure and the Sierra Leone Roads Authority (SLRA), has on Friday, May 24th, 2013 awarded the contract for the construction of the first phase of the Kono road project, from Matotoka-Yeyi, during a symbolic signing ceremony held in the Credentials Hall at State House.

Delivering a short statement following the presentation of the original copy of the signed contract to him by the Minister of Works, Housing and Infrastructure, President Dr Ernest Bai Koroma said that Sierra Leone cannot develop if the triggers of development were not cocked.

He noted that government remains focused on the challenges ahead, saying it was natural that people got frustrated with the deplorable state of the Kono road, but once the road works had started people will then realize government means business.

"Kono is a very important district to this administration, and this project is a clear message that the process of development is on. Nobody can do better than what we are doing now for Kono and the entire country", the president confidently said amidst rapturous applause.

He also noted that although SALCOST had a record of good performance, what the people wanted was quality work done within the allotted time frame. President Koroma asked the minister of works to hand over the site on the same day the contract was signed, and warned the contractor that he will be visiting their work site without notice.

Head of the African Development Bank, Dr Yero Baldeh said the bank was very much pleased to be associated with the project which stemmed from serious collaboration between all partners. He noted that the construction of the road will increase connectivity as well as open up and facilitate trade with other parts of the country. "As a bank, we are very much concerned about quality…the road should be of the highest quality and standard", he advised. 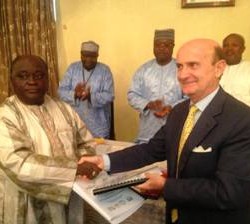 While noting that the issue of time must be taken seriously, he reaffirmed ADB's commitment to the Agenda for Prosperity, pointing out that infrastructure remains a critical issue to the bank.

Meanwhile, Vice President Alhaji Chief Abu Bakarr Sidique Sam Sumana has thanked President Koroma for his steadfastness in developing every corner of Sierra Leone. He made this statement during the official signing ceremony itself of the Matotoka-Yeyi road contract with SALCOST shortly before the official presentation of the signed contract to his boss, the President at State House.

The Honourable Vice President recalled that he had always been on the back of the Minister of Works, Housing and Infrastructure on a weekly basis to remind him that the people need an answer even though there was no such plans in place before the leadership of President Koroma came to power, pointing out that plans to construct the highway only started when President Koroma assumed office as Head of State in 2007.

Vice President Sam Sumana therefore registered government’s profound appreciation to the people of Tonkolili and Kono districts for their patience, while expressing hope that the Salini Construction company will be up to the task so as to ensure that the people get the value for their money.

He also maintained the ongoing solar electrification across the country, clearly indicates that Sierra Leone as a nation is growing rapidly and; “We as a government under the leadership of President Ernest Bai Koroma, will continue to give the people of Sierra Leone the very best in service delivery”.

Welcoming the audience, the Works, Housing and Infrastructure Minister, Alimamy P. Koroma, noted that on 22nd February, 2013, during the second inauguration ceremony of President Koroma at the National Stadium, the head of state said in his speech that he will do more in not just infrastructural development, but in all sectors. Minister Koroma promised the president that "if you do more, we will take more to help you do more", he said amidst sustained applause.

He also said that in the wake of Parliament's approval of the construction of the second phase of the road to Sefadu, Kono District, the presence of all MPs and some Paramount Chiefs from Kono was a manifestation of their appreciation for the project.

Director General of the Sierra Leone Roads Authority (SLRA) Mr. Munda Rogers said the road will be of very high quality and standard; with a shoulder of 1.5 meters, a width of 7.2 meters and 70 Kilometers in length, adding that it is the patience of President Koroma that has brought civil engineers and road experts together in order to sign the award of the contract for the construction of the Matotoka-Kono road.

Area Manager for Salini Constructori, Christian Fabio Capitanio pledged to improve on the quality of their work, and assured the ADB of the highest standards in the construction of the road, which he said, will be a first class road.

Present at the signing ceremony were members of the Parliamentary Oversight Committee, the Kono District Parliamentary Caucus, Paramount Chiefs from both Tonkolili and Kono districts and the State House Communications Unit.