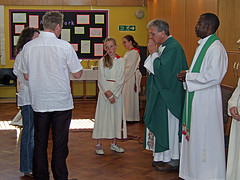 Members of the Laity Council of the Makeni Diocese past Monday walked out of a meeting with the College of Bishops after the reading of their position statement in a meeting held at the Guadalupe Sisters House at Mile 91. The meeting was summoned by the college of bishops headed by the President His Lordship Patrick Koroma of the Kenema Diocese, attended by the Bishop of the Metropolitan Diocese/ Arch Diocese of Freetown, Edward Tamba Charles, His Lordship Charles Campbell of Bo Diocese and the Diocesan Administrator, Rev. Fr. Gabriel Koroma of the Makeni Diocese, with the aim of getting first hand information from the laity council on the ongoing controversy surrounding the appointment of the Bishop elect, Rev. Fr. Henry Aruna and the way forward for preparations for his formal presentation.
The Laity council had representatives from all the parishes including Lungi, Port Loko, Kambia, Binkolo, Magburaka, Mile 91, Yonibana, Makeni and Lunsar and after Bishop Koroma’s one and the half hour background giving reasons and explanations leading to the appointment of Rev. Fr. Aruna, the Laity council of the Makeni Diocese led by the Chairlady, Mrs. Theresa Mabinty Jalloh of Bumbuna Parish stood up to deliver their response, which was contained in a position statement which was read out by the Parish Pastoral Chairman of the Our Lady of Fatima, Mr. Aloysious Kanu.
The position statement states in part that, “We the laity council and other representatives of the Diocese of Makeni express our sincere thanks and appreciation for considering us at this time on the issue of the Bishop-elect for the diocese of Makeni. It is but with a heavy heart that we consider this call and invitation as rather too late since we have not been involved in the process of the appointment of our Bishop-elect till this time.
We are here to peacefully but vehemently register our protest again on behalf of the laity of the Diocese of Makeni we represent on the appointment of Rev. Fr. Henry Aruna as Bishop-elect of the Diocese of Makeni. The process for the appointment of the Bishop-elect of our Diocese of Makeni left us with dismay as we compared it with what happens in other areas within the catholic church; hence we are not questioning the process of the appointment of the Bishop-elect, but we consider this appointment as being unfair to the Diocese because of the under mentioned.”
The statement went on to emphasise that, “The process of the appointment of the Bishop-elect did not take cognizance of the sensitivities of the historical, cultural and traditional factors involved. We want to dispel the myth that our actions were orchestrated by, “recalcitrant”, rebellious, priests of our diocese. Our actions in this matter were guided and will be guided by our consciences and, we hope, by the Holy Spirit.
We are grateful to God for His timely intervention in revealing who would be the Bishop-elect of our Diocese before the official announcement was made. We refer you to our earlier correspondences with the Apostolic Nuncio and the Archbishop of Freetown.
Our position in this matter briefly stated is, “we the laity of the Diocese of Makeni are against the imposition of Rev. Fr. Henry Aruna as Bishop-elect of the Diocese of Makeni”. We hope that the church authorities will revisit the appointment of a Bishop of the Diocese in the interest of peace, harmony, and growth.”
The Bishops could not continue their dialogue as a result of what the laity council described as blame games and finger pointing instead of solving the matter.
The controversy however continues.