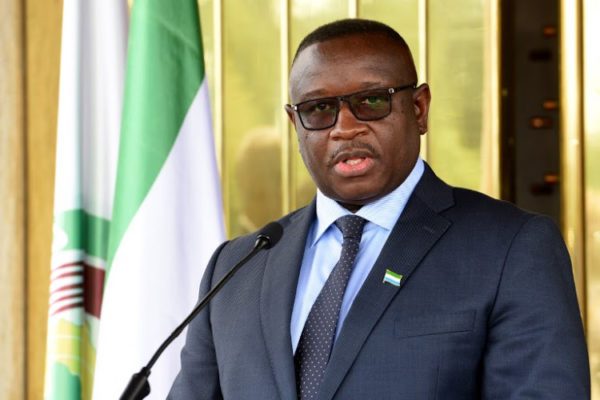 In March 2018, President Julius Maada Bio was elected president of Sierra Leone in a fiercely contested elections, in which the majority of voters refused to endorse the Koroma led APC government’s ten years of poor governance and hopelessness.

Since his election in 2007 to leaving office in 2018, president Koroma and his APC party received over $10 Billion in aid and loans to help build the country’s economy and uplift the people out of poverty.

But most of that money was either misappropriated or wasted in misplaced priorities and programmes, through a series of incoherent strategies referred to as Agenda for Change and Agenda for Prosperity.

With over 70% of adults between the ages of 21 and 55 years out of work, and an economy that was teetering on the edge of collapse, the Sierra Leone Telegraph strongly called for a comprehensive National Development Plan that prioritizes economic diversification, ending over-reliance on mining, investment in key economic sectors with high growth potential, and a greater emphasis on decentralization and devolution of power to the regions and districts.

But the Koroma led government was too much into its own self-serving world of governance and failed to heed the warnings of impending doom.

And so it was that a year ago, the people of Sierra Leone turned their backs on a government they regarded  as incompetent, corrupt, visionless and lacking in leadership.

Almost twelve months on into his presidency, Julius Maada Bio is proving to be more than capable of providing the vision and strength of leadership to govern and implement the changes that the people of Sierra Leone have been yearning. He has listened to the call for a comprehensive National Development Plan.

Yesterday, Thursday 28 February 2019, the president launched his government’s comprehensive National Development Plan that has the endorsement of international partners, such as the United Nations, World Bank and the International Monetary Fund.

Speaking at the launching ceremony held at the Bintumani Hotel in the capital Freetown, president Bio said: “When I took over the mantle of leadership of this great nation about ten months ago, I made policy statements in Parliament about our country’s development goals. I identified our country’s key national priorities and the key sectors we need to develop.

“I also emphasized that what we need as a nation is a comprehensive Blueprint for sustainable long-term development – one that is consistent with global targets set in the Sustainable Development Goals (SDGs)”.

He said that in order to ensure consistency in the execution of the medium term National Development Plan (NDP), he has directed that the country’s Annual Budgets be fully aligned to the NDP, adding that his government will encourage development partners to also align and direct their assistance and support through the National Development Priorities, so as to avoid wasteful overlaps and duplication.

He said he is leading an inclusive approach to national development, where the process of developing the plan is not only owned and driven by the people of Sierra Leone, but is inclusive, consultative and domesticated to the country’s specific development needs.

These development needs, he said, “range from developing our human capital and infrastructure, to promoting good governance and protecting vulnerable members of our society, including our women, children and persons with disabilities.”

Speaking about the awfully managed presidency he inherited, Bio rhetorically asked: “But how do we fulfil our obligations to the people of Sierra Leone against the background of the bankrupt and battered economy that my government inherited?

“Institutions that are responsible for driving growth and development were politicized, bloated, lacked capacity, and corrupt. Officials and politicians engaged in widespread looting of development resources.”

But rather than wallow in the mistakes of the former government, president Bio said that given the circumstances, he and his government quickly identified key strategic problems that needed tackling, so as to create the right environment for development – including institutional reforms, decentralization; and taking a second look at enabling laws, capacity building and resource identification and mobilization.

“When there is no predictability to development activities and outcomes, and partners are unsure about how to engage and commit to national development, or worse still, when that partnership does not include continuous dialogue and feedback, development will not happen.

“When the government is unclear and uncommitted to clearly laid out development outcomes and a comprehensive short and long-term plan, development will not happen.

“So, my government has developed this medium term National Development Plan to get the development context right once and for all.”

But president Bio is under no illusion about the importance of urgency in getting things done quickly so as to begin to transform the lives of the people of Sierra Leone. There are many hungry mouths to feed, millions of jobs to be created.

He acknowledged that Sierra Leoneans are impatient for development, and that he said, is why his government did not wait for the National Development Plan to be launched before addressing some of the critical development needs that were identified during his nationwide consultation.

“I am reminded of the saying that when one gives birth to a child, one does not plan only for the first five years of that child’s life. Let me use this opportunity to remind all of us that this Medium-Term National Development Plan is the first part of the longer-term Plan, which will span over a twenty-year period.

“During the consultation process, it clearly emerged that the majority of Sierra Leoneans prefer a long-term plan as it allows for continuity in implementation, irrespective of a change of government. They based their argument on the overwhelming desire to have a stable development focus for our country and to ensure that successive governments are guided by broad priorities set by the people of this country,” he said.

“My government has underscored the critical need to strengthen performance management in the public sector. So, for the first time in the history of this country, a comprehensive results and indicator framework accompanies this National Development Plan. That framework will provide further guidance to MDAs as they deliver on the people’s plan,” he added.

Minister of Finance – Jacob Jusu Saffa, said the National Development Plan is based on the Sierra Leone People’s Party New Direction Manifesto, which prioritises consultation. He said the NDP is a collaborative effort between the Ministries of Planning and Development and Finance, as well as other ministries, departments and agencies, including development partners.

The Finance Minister said it will cost the government an estimated $ 8.15 Billion to deliver the Plan and achieve the planned outcomes. Minister of Planning and Economic Development, Nabeela Tunis, said that after a broad-based national consultation, she is of the belief that the NDP will transform Sierra Leone.  She said about two million people were consulted during the process as a way of ensuring that no one was left out. The Plan she said, is aimed at transforming Sierra Leone to where everyone has dreamt of, through partnership and collaboration.

The United Nations Country Representative – Sunil Saigal, who spoke on behalf of donor partners, congratulated President Bio for putting the National Development Plan together and for placing human capital development at the centre of his priorities.

Sunil Saigal noted that the new National Development Plan incorporates the UN Agenda 2030 for sustainable development as well as the African Agenda 2063, adding that in doing so Sierra Leone is setting an example for other countries, by bringing both global and African regional goals into national development planning.