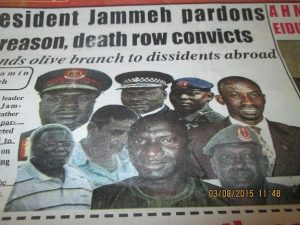 “I believe in the fear of Allah and forgiveness” Says:- Yayah Jammeh

In an action that the people of The Gambia have referred to as unprecedented in the history of their country, President Yayah Jammeh last week acting within the powers conferred upon him by section 82 of the constitution of The Gambia, pardoned all those were convicted of treason since 1994 to 2013 and were serving death sentences or life imprisonments, including a Sierra Leonean citizen who was convicted for drugs.

Giving his address during the 21st anniversary celebration of the July revolution in Banjul, President Jammeh said all those convicted of murder and have served, at least, ten years in prison are pardoned.

He however stressed that such pardon of murder convicts has exception.  That first exception include cannibals who rallied a woman in a farm and chopped her body into pieces and ate some of it.  The secondly is a man who shot his first wife and wanted to wipe out all the children of the wife because they opposed to him taking a second wife. The third are group of foreigners who killed a British citizen, stabbing him more than 71 times in his car and tried to burn his remain. 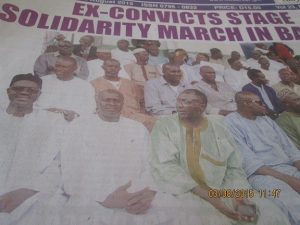 According to President Yayah Jammeh, such type of convicts will never be forgiven. In addition to that, he refused to pardon perpetrators of violence against women and children and persons found guilty of infanticide. He strictly warned that there will be no mercy for raping children as convicts will serve the full sentence.

The President also pardoned all first offenders of possessing and trafficking cannabis sativa who have already served at least three years of their sentences.

With regards hard drugs, the Gambian leader said all those who have served five years for cocaine and other hard drugs are forgiven. “For convicted rapist”,  says President Jammeh, “if the victim is above 20 years, then the culprit is pardoned”.

“In as much as we welcome everybody, irrespective of your color, your race, your religion or wherever you come from or your culture, all convicted foreigners should be deported immediately” he announced.

The Gambian leader warned all those pardoned and their families to never be on the wrong side of the law again for the next ten years or they will pay the price. He reiterated that drugs, drug trafficking, murder and rape are heinous crimes which shall never be tolerated in The Gambia.

“As Muslims and good Christians, the Holy Quran and Holy Bible teaches us about forgiveness and total devotion to Allah. If I don’t forgive then I am not a good leader. My strength lies in my belief in the Almighty Allah” Says President Jammeh.

Less than a week after their release, the pardoned convicts staged a solidarity march in the capital city of Banjul. They openly pledged their support for President Jammeh and his government.