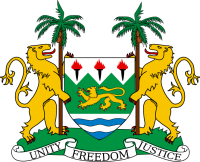 OFFICE OF THE CHIEF OF STAFF, STATE HOUSE

FREETOWN:  The Government of Sierra Leone has requested the World Bank and the IFC (International Finance Cooperation) to support the Public Private Partnership (PPP) Units at State House to address infrastructure gaps and improve service delivery in the country.

The new strategy is geared towards mobilizing the private and Public Sectors to finance large projects and ensure high quality infrastructure to get the optimum benefit from Sierra Leone’s excellent growth pattern.

Specifically, the world Bank and IFC are providing assistance to identify high potential PPPs and providing capacity building support to the PPP Unit and MDAs (Ministries, Department and Agencies) to help identify,  select  and implement PPPs.

Public Private Partnerships are large scale business ventures funded and run by a combination of public and private funds and skills.

A recent pipeline mission study undertaken within the country developed the Government’s pipeline of PPP projects and identified potential Greenfield projects for the short, medium and long-term.

During a two week period Consultants, together with senior members of the government held constructive dialogues and fruitful discussions with various MDAs, the Private Sector, Mining Companies, Law Firms, Energy companies, Freetown City Council, local contractors and NASSIT.  The multi-sectoral discussions focused on the review of a pipeline of PPPs and ways to develop them, including feasibility studies, especially in the energy and infrastructure sectors.

As reflected in the Government’s Agenda for Prosperity, the Power, Water and Transport sectors are part of the government’s key priorities for development and are potential PPPs.

The Chief of Staff in the Office of the President has stressed this strategic approach to development  that “Public Private Partnerships will remain a key approach of the Government of Sierra Leone to investments in infrastructural development and is committed to ensure that the private party is able to recoup its investment with returns. This is important both for economic recovery and long-term sustainable development in the country”. At the same time, IFC’s Resident Representative, Mary Agboli states that, “Together with the World Bank, IFC is committed to helping Sierra Leone achieve lasting economic growth and job creation by supporting the development of its private sector. Public Private Partnerships will play an important role in helping mobilize private capital and expertise so that Sierra Leone can build the infrastructure it needs to support its economy.”

An expected outcome of the PPP Mission study is production of a draft PPP Pipeline Report on which mission, the Consultants will prepare a draft PPP pipeline analytical Report, with findings and recommendations for the Government. This report will include (i) a review of any market, technical, and operational issues that could affect private sector interest; (ii) a recommendation on the prioritization of the projects; (iii) and a recommendation on any further technical assistance that would be needed to implement the proposed PPP transactions.

The final review of projects will be consistent with Government’s Agenda for Prosperity ( 2013-2017) ,  the report will also include recommendations on feasible Greenfield projects for the short and medium-term.