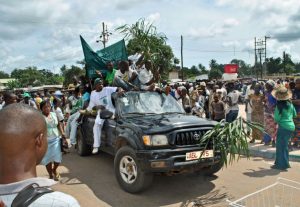 Amidst the hurly-burly of economic stagnation, social meltdown and ravaging epidemic, you might be forgiven for taking your eyes off the political micro-pampas and ever decreasing altruism in our democracy.
Which is why I am breaking off the ‘Diet of Hard Knocks Series’ to focus on an issue that is also of national interest, especially in the future democratic direction of the country – and that, is the protracted crisis within the opposition SLPP.
Because aside the festival of death by Ebola and the current malaise of the country, whether we like to believe it or not, we all are embroiled directly or indirectly, in the discomforting heat waves of the SLPP crisis simply because even a toothless opposition is better for our democracy than none.
Like so many other things, our national politics has amazingly sunk into a horrible base level and from all indications, it is no longer in doubt that our democracy is in peril. The SLPP crisis is one of the plethora of reasons why this is so. (No opposition, leaves the road clear for impunity by the ruling class).
Anyway, the complexities of the SLPP crisis tend to vanish in the binary view that an individual is the catalyst of the problem and it is therefore a localised political issue capable of being resolved in the typical cynical and absurd papering-over-cracks that has become part of our partisan national ethos.
Hence, after each such crisis, in any of the political parties, APC, SLPP, PMDC…, we shiftily declare that we have put an end to absurdities and chronic dysfunctionality that created the problems only to realise no sooner, that the coffin remains empty of the carcass of the debilitating scourge.
Fair enough and objectively speaking, there is no good reason to believe that most of those in position of leadership or influence in the two main parties – the APC and the SLPP, are committed to genuine transformation of their party, let alone the country; beyond the entrenchment of their hegemony.
But sadly, they are all we have at the moment and we just have to make do with them until we can reform their chronic problems; which is why the goings-on in the opposition in particular and in our democracy in general, should interest all lovers of political development. 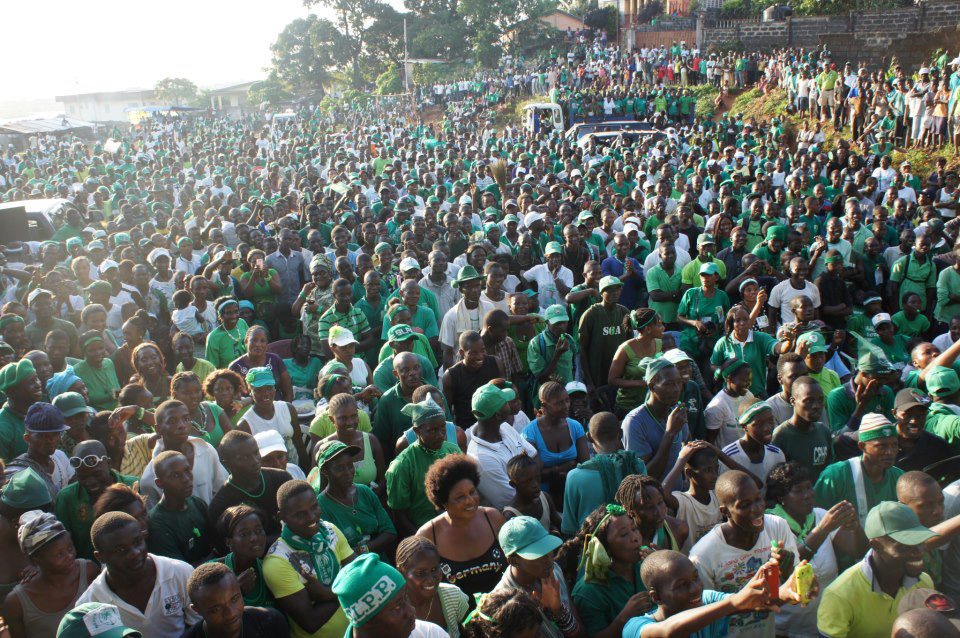 In an article on the state of affairs in the SLPP after the last election, I stated inter alia:
“Looking at events of the past five years, it has become imperative that in carrying out a post-mortem, the SLPP, not only need to feed from the department of home truth, it needs to appreciate that the collective defiance to confront its demon and face the fact of what divides rather than unite its members, borders on delusion.
Guided by the cold calculation of strategic interests, than by principles, the party, shorn of influential elders that could stand stoically upright in defence of the entrenched ideology of the party, was caught in the vehemence of surrounding, past and present controversies. Attempts to patch the leak and re-arrange the deck chairs on its Titanic, in a bid to sate the mob’s appetite of the many hungry mouths in its fold, ended with anomie and mutiny and threw it into disarray; making it difficult to rise from its deep slumber and become a cohesive and credible alternative to the ruling party.
THE SLPP (and indeed any serious opposition) should go and put its house in order because if it keeps doing what it is doing, it will keep getting what it is getting. It needs introspect and a conscious contribution to the strengthening of the imperative for national reinvention; not reinforce the predator’s paradise that exists at the moment. The SLPP cannot dissociate itself from the sad state of our democracy. Principles are easily discarded when politicians’ indulgences cannot ensure the achievement of their goal. That should not be the signal emanating from the SLPP or any future opposition.
(RANDOM MUSING: FAIT ACCOMPLI: The Moniker of a broken party in freefall?” 12/12/12) 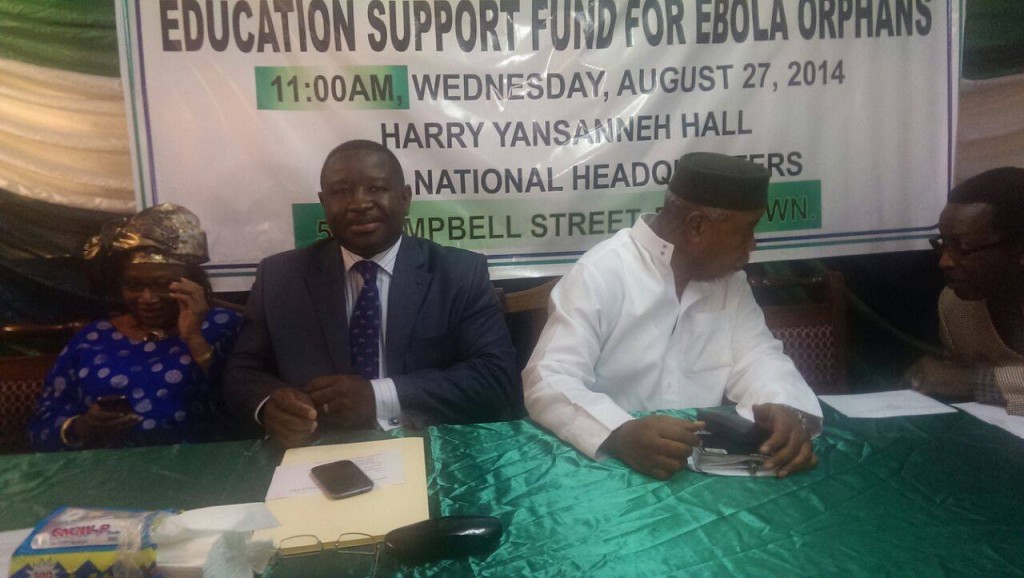 Now, judging by the discordant tunes wafting out of the covens of the SLPP, following a recent visit to the United Kingdom by its erstwhile chairman, John Benjamin, during which an apparent peace and reconciliation meeting brokered by the UK branch of the party was allegedly held, it is obvious that the so-called ‘hallelujah’ is as phantom as a virgin birth.
What has emerged is the sniggering undertones of the deep-seated political gyration in that house of broken dreams; where intrigues and internal rivalries at every turn expose the absence of sincerity on the part of its members and confirm that the SLPP will continue to trudge along the same pathway of indiscretion and political infidelities.
Consequently, it is very clear that the balkanisation of the party following manoeuvres and scheming that have continued to tear the party into shreds and which led to its disastrous outing in the last election will not be resolved as long as the guiding principles of key members of that party is “God save me from my friends; I can take care of my enemies,”
A peep into the politics of the so-called peoples’ party reveals apparent and inherent selfishness and treachery that have been the hallmark of some of its notable actors who are still poised and determined to play a frontline role. Without doubt then, the immediate future is not about to depart radically from the prevailing scenario and will probably last even beyond the next election as the party grapples with life-threatening challenges that have continued to test its strength and structure like never before.
Those within and outside the party who after the loss of power in 2007, harboured upbeat sentiments to see robust politics and a true reflection of the yearnings and aspirations of the greater majority of the party’s members have been continually disappointed by the ideological polarisation which is basically behind its dilemma.
So what lessons have the gladiators and political schemers of the party learnt? To me, NOTHING.
At a glance, the conflicting reports and reactions to the purported stakeholders meeting in London reveal not only the continued existence of powerful blocks of cliques within the party but also the absence of the deep sobriety that is needed to confront a ruling behemoth party so inebriated with power. 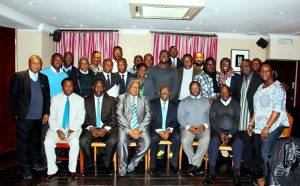 The pact is part of a compendium of reasons why peace will forever elude the party; not because it is not a positive move, but simply because it smirks of a desperation that is already making some party adherents outside the UK exco that brokered the talks, squeamish; especially following some of the utterance credited to John Benjamin after his sojourn in the UK.
Some have claimed with a modicum of justification, that his participation in the meeting was simply a special purpose vehicle to further address his political needs by trying to be seen as an ally of the defeated Presidential candidate whom he left to be devoured by vultures in the last campaign. It is felt that it is the final piece in his jigsaw before retracing his steps to sceptic antithetical laissez-faire to opposing elements within the party.
Distant observers also feel that some trusted associates of Maada Bio are unlikely to view the role of John Benjamin in the whole crisis from the pre- 2012 confusion to the last national convention of the party favourably and may show some discomfort at a stage when the chips are down.nNot only that, why have other aggrieved parties been left out of the discussion? With the national executive in virtual paralysis, why is cart of personal ambitions being put before the horse of party unity?
Beyond the London photo-shoot, indications are that despite the bleating emanating from parts of the party, especially the erstwhile leader, the current night of the long-knives is not about to give way to a new dawn in the party just yet. The composition of the London brokering group and the principles enunciated by other splinter bands of peace envoys, in the search for a lasting solution, could at best, be regarded as a “salad bowl of illusions” prepared by too many cooks.
Apart from the APC’s voice of Jacob and hand of Esau in the protracted crisis, the SLPP has not woken up from the slumber it has long been drenched in because of the rot in its internal system and the ethnic power-play that has often been underplayed.  And here, lies the threat that is ahead.
Because of the fight for the very soul of the party, political alignments have led to a topsy-turvy situation which has not helped the image of the party that was originally founded to give fillip to the pre and post-colonial political arena.
The question may be asked of those who claim to have the blood of the party flowing in their veins: where have integrity and good conscience gone? Where has good name gone? Why is it that people no longer feel any qualms about the things they do and all that matters to them is their vaunted ambitions and not the masses for which the party claims to be a symbol?
The SLPP cannot and will not overcome its crisis with the contending members bent on taking control, coming to the table with equity, fair-mindedness, high moral principles and personal integrity. From indications so far, such individuals are a wee bit difficult to get today, in the party’s landscape.
It is true that every great enterprise starts off with enthusiasm for an exalted aim and ends up bogged down in petty politics. The new initiative, can only work when the key members show regards for their party rules, have the capacity and willingness to subject themselves to the decision-making process and be ready to ensure total inclusiveness of the views of other members, without prejudice.
The SLPP is one of the pillars of our nation’s history and we, just like its members, cannot discuss our democratic evolution without reopening the unhealed sores of the immediate past.
Truth is that for the on-going acrimony not to linger, several actors and indeed the party itself, have to face the truth that their unwillingness to learn from history is why some unscrupulous individuals within and outside the association are sticking up two fingers by the method of rectal infusion.
Political parties are meant to be a training ground for leadership in government. It is obvious that the inability of the SLPP to guarantee inclusiveness which led to the mass defection it experienced in the run-up to the last election portend a great danger to its and our national democratic process.
To stem continued instability, the party’s membership collectively must not only have to rise up and strengthen their internal democracy; they must insist on its entrenchment and cull the vaunting ambitions which often spell doom for unity.
The party must not allow the ugly set-up and acrimony to degenerate further or else it will burn itself out.