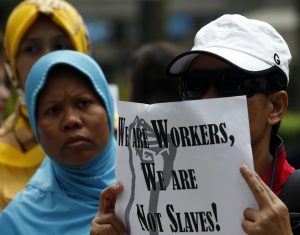 Generally, the history of maids’ recruitment to the Arab world has oftentimes been a source of misery for the maids themselves and a source of headache for Embassies to which such maids belong.

Whosoever has been a resident in the Arab world, especially the Gulf Region, knows the facts of this matter. Hopes of most maids recruited to some of these Gulf countries dash due to some despicable treatment meted out to them by their masters or mistresses, and very often, with the knowledge of their unscrupulous recruiting agents whose sole aim is to extort money out of the misery of their victims.

Untold stories abound in the case of Filipino, Indonesian, Indian, Nepali maids who, over the years, have undergone physical assaults and financial deprivation in the hands of their masters/mistresses. In some cases, to save themselves from continued atrocities and molestation, they would end up escaping by sneaking out of their torture chambers to safety. It is such maids who would later be branded as ‘runaways’. And in some worse scenarios, in retaliation, some maids would resort to abominable acts either against the mistress/master or a family member.

The Recruitment of African Maids

Africans were safe from these unfortunate situations until recently when recruitment of maids from the African continent started in earnest. It started with Kenyans whose image has been depicted as one of the worst so far.

Seen as a lucrative venture, some West African citizens, including Sierra Leone, have in recent years got involved in recruiting maids to the Gulf without putting in place proper mechanisms that would safeguard the rights of the maids in the event that such maids are mishandled by their masters. Many a time, the sugarcoated motive portrayed to the would-be maids is to help them improve their lives by taking them to greener pastures without a clear explanation as to the nature of work they will be required to do upon their arrival at their destinations.

The beautiful dreams of these recruited maids very often change into nightmares the moment they are faced with the bitter realities on the ground – workload and ill-treatment of unexpected nature and proportion and downgraded salaries that would not be able to maintain a maid for even three days. Here begins the miserable life such maids would go through as a consequence of improper arrangement or contract devoid of any clear-cut laws or regulations that would save the rights of the maids by restricting masters/mistresses from committing excesses against their maids. Only very few maids get fortunate enough to work in an atmosphere free from stress, atrocities and excessive physical exhaustions.

The Bilateral Effects of illegal Recruitment of Maids

What has prompted me to advocate the ban of such illegal recruitment of maids to the Arab world in general, and the Gulf Region in particular, is the fact that bilateral relations between countries of these unlawfully recruited maids and the host countries may get strained in one way or another in the event that these maids could not handle their assigned duties. And as a consequence, when the situation develops into alarming proportions, such cases end up requiring the involvement of Embassies and Nationals to settle complex issues whose nitty-gritty they basically have no idea about, all in the name of commitment to national issues.

We have heard harrowing stories whereby either maids kill or get killed by their oppressing masters/mistresses. In some cases, as a result of unjust acts, maids sometimes lose all their rights and get deported in mysterious circumstances, even after they have suffered horrendous atrocities.

Recently, the Sierra Leone Ambassador to the State of Kuwait, His Excellency, Mr. Ibrahim Bakarr Kamara, sadly and unjustifiably got his name embroiled in an incident involving maltreatment of a Sierra Leonean sister who allegedly became a victim of such illegal recruitment of maids. Although the alleged debacle was later denounced as a sham, the Ambassador’s reputation was almost dented had it not been due to the verification of a cross –section of the local media back home into the matter in addition to the timely intervention of the Sierra Leone Union in Kuwait, which totally and unequivocally refuted the knowledge of the Sierra Leone Embassy in Kuwait of the entire saga, let alone the involvement of His Excellency, Mr. Kamara who is always known to be rendering diplomatic protection to his nationals since he assumed duty in 2009.

What is indeed so disheartening and astonishing is to realize that some of those local recruiters are individuals who have long lived in the Arab world and, by default, are fully aware of the sad history of maids in their countries of residence. But owing to their selfish ends, they not only subject their sisters to such miserable and hard life, but they also mercilessly extort exorbitant sums out of those poor sisters. Thus, I am hereby calling upon such brothers to duly reflect on their actions so that they would have a bite of conscience to realize that their deeds do not have any bearing on poverty alleviation, as they often claim to be the driving force behind their dubious acts centered with greed.

To safeguard rights of maids in the Gulf, countries like the Philippines, Indonesia, India and Nepal have negotiated with Gulf beneficiary countries and agreed on mechanisms that would protect their citizens from any physical assaults or forfeit of their rights. To arrive at this agreement, the Ministries of Labour of both the countries of the recruited maids and beneficiary countries and Embassies of the concerned maids have to be signatory parties to all agreements and contracts with respect to maids’ recruitment. By so doing, these countries have ensured that their citizens will no more be subjected to any mistreatment and unjustifiable handling.

The Government of Sierra Leone should take every measure possible to ensure that such illegal recruitment of our sisters is banned forthwith. Individuals who would continue to pursue such unlawful dubious money making venture by subjecting their compatriots to unpredictable outcomes must be brought to book. Unless the Sierra Leone Ministry of Labour and Social Security, with the approval of Parliament, and the Sierra Leone Embassies in the Arab World, officially come into an agreement with beneficiary countries in the Arab world to recruit maids from Sierra Leone, such illegal and dubious maids’ recruitment must be brought to a definitive closure.

In fact, it is imperative on the Ministry of Labour to seek the advice of the Sierra Leone missions in the region on recruitment generally before approval. This will enable the missions to conduct. Due Diligence on the employer or agent, and the nature of work and advise accordingly. It is extremely dangerous to give approval for manpower recruitment for any destination in this region without reference to our Embassies amidst the desperation of ISIS and other terrorist groups in their recruitment drive.

Note: The views expressed in this article are those of the author and do not necessarily represent the Sierra Leone Missions in this region.

I’m not necessary saying that no Sierra Leonean maid should fly to the Gulf region, but I can unequivocally confirm that the human right abuses of foreign workers in the Middle East is far worse than reported.  Many people think if you are a Muslim you should not speak or write against any  Arab .  This is a primitive assertion.  Some of us have lived, studied, worked and toured in the Middle East and we can bring you countless number of human right cases involving Arab employers and foreign workers, most especially females.

This is not about religion, it’s about humanity.  I therefore agree strongly with the author that Sierra Leone government should take stringent measures  about recruitment and export of Sierra Leoneans to Middle East.

To know more about workers right in the Middle East, Just take your time to browse the following links: