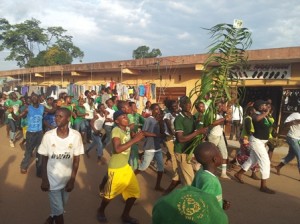 Youths Dancing in the Street of Kenema ahead of elections

Simaila Street is not only one of  the longest Streets in the eastern commercial capital of Kenema but it has also become the strategic point of political showcase, as many political rallies conducted by various political groups in the township ahead of the November 17 elections either begin or end there.  This is because the town field is situated at the intersection of the famous Simaila Street and Combema Road which is one of the main motor roads that links the city with the far interiors.  I have so far witnessed rallies organized by many political groups including the two major contenders, APC and SLPP on diverse dates. If the behavioral pattern of the Kenema youths at those rallies is a showcase of the whole eastern region, then the elections in this part of the country are going to be more peaceful than a European football match.  Residents of the region have so far demonstrated a high degree of political tolerance and maturity as they seemed to have minimized the campaign to a mere jubilation and privilege conversations.  The major theme of discussion here is “why RED and not GREEN?” or the other way round.  Many households in the city are more colorful than a September rainbow, of course, with the green taking a dominant effect.

Similar game was observed during a rally organized on past Sunday by the ruling All People Congress (APC) in the capital city, Freetown.

A German lecturer one day told me that “politics is a very expensive game that only accommodates the rich and educated”, but the ongoing campaign seemed to be only focused on money as the voter population, particularly the youths, have proved to be cleverer than the sophisticatedly educated politicians.  The youths who possess the game-changing charm, have realized that the politicians are ready to buy votes at any cost and they are now looting them systematically using the two powerful colors in the country’s political game, red and green. “We don’t trust any of them, they are bringing us back our money which they robbed while in political power”, said a student of the Eastern Polytechnic who stressed on anonymity. 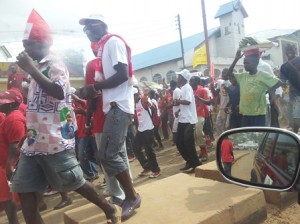 What makes the game more interesting, according to  my keen observation of rallies organized by various political groups in the country,  is that many politicians who view rallies as showcase of their strength in the game are not only fooling themselves but they are also wasting resources in vein.   Each political party is given three days in diverse weeks to campaign during which its sympathizers are allowed to showcase their support for the party. I’m not a registered voter though but I could feel the gravity of money in the game. A prominent politician who described himself as a minor financier of the ruling party told me that each campaign organized in Kenema city, for example, is costing him (individually) not less than Le 50.000,000.  Physical cash and logistics including motor bikes are being dished out to area youths in order to win their votes. It’s prohibited by international electoral laws for a political party to campaign with physical money but this law is overruled  in this part of the world as party T-shirts plus physical money are openly distributed to area youths in exchange of their support during rallies.

Political pundits who earlier attempted to predict the possible outcome of November 17 based on the past experience have found themselves in endless journey of academic meditation as the behavioral pattern of the average Sierra Leonean youths has proved to be more sophisticated than academic conjectures.

However, what remains an unchangeable truth is that despite the harsh economic situation in the country the average Sierra Leonean voters are impatiently awaiting November 17 to exercise their civic rights either for or against one of the two powerful colors: RED, GREEN.  The clock is ticking….