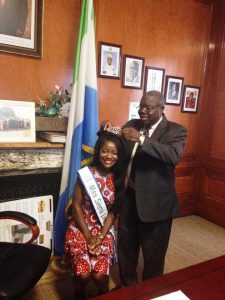 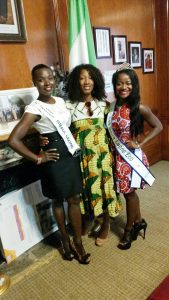 Born in Freetown, Ruby returned to her nation of birth during her official homecoming as Miss Sierra Leone USA 2012-2014 in April 2013. She visited schools and hospitals, as well as paid courtesy calls to several officials.  From July to August 2013, Ruby traveled again to Sierra Leone to complete her mining internship at Octea Mining in Koidu City, Kono District in the Eastern Province.
This past May, Ruby received her Bachelor of Science degree in mining engineering from Virginia Tech with a minor in women’s studies leadership.
Among her many passions, Ruby is a relentless advocate for girls and women in science, technology, engineering, and mathematics (STEM) fields. In 2010, she created When You Believe Foundation, Inc., an organization committed to women’s empowerment and advocating for self-sufficiency and betterment of girls and women.
Miss ECO is an international beauty contest founded by the Let’s Take Care of Our Planet (LCTP) Organization, “BEAUTY FOR ECO.” The aim is to awaken through the theme of Tourism and Environment.  Echoing Ambassador Stevens’ remarks, Dr. Ahmadu observed that, “the Miss ECO Pageant is a great step towards rebranding a post-Ebola Sierra Leone and we should all be involved in helping Ruby to bring home this international accolade!”