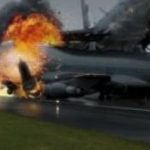 A day after a plane crash outside the Russian city of Yaroslavl killed dozens of Russian and international hockey players, hundreds of residents and supporters gathered Thursday at the arena where the Yaroslavl Lokomotiv hockey club played to commemorate those lost.
Russian TV showed mountains of flowers, scarves, flags and other items bearing the team’s insignia being laid in front of the stadium in Yaroslavl, a city 155 miles northeast of Moscow. Candles were lit and many people were crying.
Churches across the city held memorial services, with many fans attending dressed in Lokomotiv jerseys. Fans put up a poster outside the stadium wishing a speedy recovery for one of the team’s leading players, forward Alexander Galimov, who was one of the two survivors of the crash. Doctors say he suffered burns over 80% of his body. “Sasha, keep fighting, the country is with you,” the poster says, using the Russian nickname for Alexander.
Galimov and crew member Alexander Sizov, the other survivor, were flown to Moscow for treatment in leading Moscow trauma clinics, state media reported. The Russian Health and Social Development Ministry earlier described their condition as “serious.”
The Yak-42 passenger airplane was carrying 45 people, including eight crew members, when it crashed just after takeoff outside Yaroslavl Wednesday afternoon. It was bound for Minsk, Belarus, where the team was to play Thursday.
Many of those on Lokomotiv Yaroslavl’s roster had ties to the National Hockey League — which includes teams from the United States and Canada — including Pavol Demitra, a former Minnesota Wild and Vancouver Canucks center from Slovakia, and Josef Vasicek from the Czech Republic, who had played with the New York Islanders and Carolina Hurricanes. Another Lokomotiv player, Ruslan Salei from Belarus, had skated for the Anaheim Mighty Ducks, Colorado Avalanche and the Red Wings. Lokomotiv head coach Brad McCrimmon, a Canadian who also died in the crash, was an NHL veteran as well, the league said on its website.
Yaroslavl Gov. Sergei Vakhrukov has declared three days of mourning in the region, Friday through Sunday, for those killed, his website said. The regional authorities have also decided to pay 300,000 rubles (about $10,200) to each family that lost relatives in the incident. The Yaroslavl City Hall, for its part, will pay 150,000 rubles (about $5,100) to each family, and the air carrier will also pay 2 million rubles (about $67,700) to each family, Vakhrukov said at a press briefing in Yaroslavl.
The Russian Emergency Situations Ministry reported Thursday that all 43 bodies have now been found at the accident scene, and divers have recovered both the flight data and voice recorders from the plane. “Investigators are looking into all of the possible theories behind what happened. However, the most likely theories are a technical malfunction or pilot error,” Russia’s Investigative Committee said on its website. More than 50 investigators, criminologists and forensic experts are currently working at the scene, the committee said.
Russian Transport Minister Igor Levitin said all Yak-42 planes currently in operation would undergo extra checks in the next three days. Speaking from a crisis center set up in Yaroslavl to deal with the crash aftermath, he said that at the moment 16 Russian air carriers are using 57 aircraft of this type.
President Dmitry Medvedev visited the crash site and laid flowers there Thursday. “This was a shock for the whole country,” he said. “But there is a special aspect to this: the plane was carrying the lineup of a team loved not only in Yaroslavl but also all over Russia, and which was one of the most successful clubs in this country. “This is a huge loss not only to all of their relatives and beloved ones but also to all fans and the entire state.” The government will have to take tough measures to upgrade the country’s aircraft fleet, step up safety standards and radically cut the number of air companies, Medvedev said. Passengers’ lives, not the interests of Russia’s aircraft industry, should be the top priority in taking these steps, the president said, speaking at the crisis center in Yaroslavl.
Medvedev then went on as planned to the third Yaroslavl political forum, a high-profile annual international event taking place in the city.  The Russian president, who delivered a keynote political speech to representatives from 32 countries gathered there, began his address after a moment of silence was held to pay tribute to those killed.
The Russian Kontinental Hockey League will now start its regular season Monday, following the commemorative events in Yaroslavl Saturday, the league announced on its website.  The chairman of the league’s board of directors and a hockey legend in the country, Vyacheslav Fetisov, said on national TV that many players from other hockey teams had said they want to support the club and volunteered to play for the Yaroslav team. “We will work on such a transfer mechanism in the near future,” Fetisov said.
And Alexander Medvedev, president of the league, said in a radio interview that “all the KHL clubs without exception called the league and said they are willing to send their best players to Yaroslavl.”