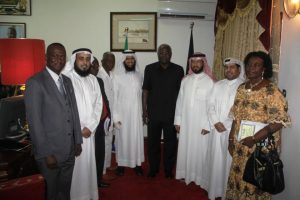 Pres. Koroma flanked by a Dele From the Cultural Center of Kuwait during their recent visit to Freetown

Sierra Leone’s envoy to the State of Kuwait and other Gulf States has successfully negotiated with the Under Secretary of the Ministry of "Awqaf" (Endowment and Religious Affairs) in the State of Kuwait for the construction of a Multi-Purpose Islamic Cultural Centre in his country.
During their deliberations, His Excellency Ibrahim Bakarr Kamara and Dr. Adel A. Al-Falah agreed to grant a full package scholarship to 36 Imams across Sierra Leone to be trained annually in the State of Kuwait. They also discussed the provision of ten (10) Scholarships for Sierra Leonean students to study in the prestigious Kuwait Islamic Religious College.
On the 10th June 2012, a high profile delegation from the Islamic Cultural Centre in the Ministry of Endowment and Religious Affairs led by Mr. Bandar Al Sheik Ahmed Alnasafi visited Sierra Leone as an advanced assessment team.  They reportedly held successful meetings with the concerned authorities in the country. The delegation also visited the proposed site for the construction of the Center in the Northern headquarters of Makeni.
In another related development, a two-day workshop chaired by the President of the Imam Council, Alhaji Yayah Deen Kamara was recently organized at the Abu Bakarr Sidiq Centre in Freetown, where the Kuwaiti visitors delivered impressive lectures.  The occasion was also used by the Kuwaiti delegation to conduct interviews for successful Imams for the training courses in the Islamic Cultural Centre in the State of Kuwait which is expected to commence in October 2012.
Prior to the completion of their fact finding trip to Sierra Leone, the delegation paid a courtesy call on His Excellency the President, Dr. Ernest Bai Koroma at State House.  They were led by the Honourable Minister of Social Welfare and Gender Affairs, Mr. Steven Gaojia and his Deputy, Madam Rosaline Oyah Sankoh. Also present were, Alhaji Saidu Bangura – Cultural Attaché in the Sierra Leone Mission in Kuwait and other dignitaries.
The delegation thanked President Koroma for giving them audience out of his busy schedule. The head of delegation, Mr. Alnasafi intimated the President that they were very much impressed with the hospitality accorded them by the People and Government of Sierra Leone. He described the visit as "very successful."
The Fountain of Honour welcomed the delegation to Sierra Leone. He expressed thanks and appreciation to the Amir of the State of Kuwait, His Highness Sheikh Sabah Al-Ahmad Al-Jaber Al-Sabah for the numerous assistance rendered to the People and Government of the Republic of Sierra Leone over the years.
According to State House Communications Unit Chief, Jarrah – Kawusu Konte, the Chief Executive said the visit was going to strengthen the strong ties that exist between Sierra Leone and Kuwait. "The President noted that Kuwait has been supporting the country’s development efforts over the years through the Kuwait Fund and other bilateral assistance."
"He maintained that Kuwait had also provided opportunities to many Muslims in Sierra Leone and most of the country’s great Imams studied in the Islamic Republic of Kuwait," Jarrah  quoted President Koroma to have said.
Here is a lineup of the hardworking team