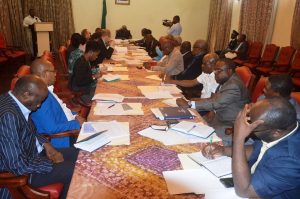 In an effort to facilitate the reopening of schools to achieving new heights and moving beyond pre-Ebola gains in the country’s educational system, the Ministry of Education, Science and Technology (MEST) held a consultative meeting Wednesday 21 January at State House with other line ministries and development partners to discuss ways and putting in measures for the reopening of schools within the shortest possible time.
In his opening statement, President Ernest Bai Koroma said the purpose of the meeting was to bring together MEST and its partners to share plans they have been putting together for the possible reopening of schools. He described the education sector as one of the sectors badly hit by the Ebola outbreak. The president expressed the need to reengage “our programmes to ensure timely reopening of schools and the appropriate positioning of facilities to adequately address some of these issues.” He added that the ministry has been working with some of their development partners and members of civil societies in preparing programmes for the resumption of school activities.
The Minister of Education, Science and Technology Dr Minkailu Bah explained that immediately Ebola struck, his ministry put together an Ebola response plan for education, adding that his ministry is working towards the reopening of schools by March this year.  He furthered that the ministry will be engaging the communities and have been working with the Sierra Leone Teachers Union (SLTU), Conference of Principals and Head Teachers’ Council to enhance the process. As part of plans to reopen schools, Dr Bah said that the programme will cover all schools including private schools even in the provision of thermometers across the country.
He continued that in as much as government is subsidizing fees for girls, they will also extend it to boys in secondary schools and remove the burden on parents, adding that the ministry will also provide teaching and learning materials. Minister Bah also stated that the MEST has come up with guidance notes, protocols and providing sensor computers to be used in tertiary institutions, as well as ensuring that teachers are trained in the use of thermometers. “We are planning to make sure our schools are safe and disinfected so that we can get back our children to schools,” he disclosed.
The Chief Executive Officer of the National Ebola Response Centre (NERC) Major (Rtd.) Alfred Paolo Conteh suggested the involvement of the World Health Organization in the process. The Deputy Minister of Water Resources Alhaji Foday Bayoh said they had developed a programme called “Washing Schools” to provide water and sanitation to all schools.
The UNICEF Country Representative Roeland Monasch called for effective community engagement and mothers’ clubs to ensure that all children including the additional 25% of children not going to schools prior to Ebola benefit and double up efforts so that the education sector plan is implemented immediately. The DFID Ebola point man Donal Brown highlighted the impact this effort will have in getting down to zero new cases and suggested a proper risk assessment, the state of the disease and condition on the ground.
The Minister of Social Welfare, Gender and Children’s Affairs Alhaji Moijueh Kaikai expressed serious concerns about the control of children in preparatory schools and suggested a two years funding of subsidizing fees for all schools.
The meeting was attended by the ministers of Finance, Health, Education, Social Welfare, Energy, Water Resources, CEO of NERC and donor partners including US Embassy, CDC, Red Cross, World Vision, WFP, UNDP, WHO, UNICEF and DFID.