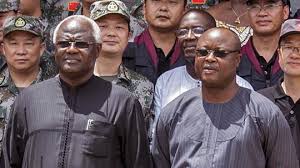 President Koroma and Dethroned Vice President Sam Sumana"If I profess with the loudest voice and clearest exposition every portion of the truth of God except precisely that little point which the world and the devil are at that moment attacking, I am not confessing Christ, however boldly I may be professing Christ. Where the battle rages, there the loyalty of the soldier is proved; and to be steady on the entire battlefield besides is mere flight and disgrace if he flinches at that point." – Rev. Martin Luther King, Jr.

Kudos to the costitutional conservatives like Attorney Charles Margia, The Elite and longtime Constitutional Scholar- Dr. Abdulia O. Conteh, the power house Journalist-Dr. David Tam Bayor, Chief Sumunu Kapenn-Chrm; SLPP, and others for courageously refusing to keep quiet about the brewing Constitutional crisis concerning the removal of the elected Vice President Chief Alhajie Sam Sumana when the president supporters backed him of his unconstitutional action against the constitutionally elected Vice President. Their action was preposterous, ridiculous and laughable!

Shame on yes men like: Alhajie Alpha Kanu, Diana Konomanyi, Korimokor Kabba, Balogun Logus Korona, Ibrahim Ben Kargbo – and all the other hypocritical "conservatives" – who have FAILED in the removal of the elected Vice President Chief Alhajie Sam Sumana! They have deserted their posts and shirked their responsibilities, betraying legitimate concerned Sierra Leoneans, aiding and abetting the leftists who point to their treacherous example and say, "See, this isn't important because even they don't make an issue of it!"

Regardless, it is THE issue that will affect every other conservative issue, since then, these Sierra Leoneans are meant to be based upon the Constitution without hesitation, go by facts not feelings without apology, and submit to the rule of law not immoral majority. If it goes for Vice President Sam Sumana, everything does go visa-vis. Kiss Sierra Leone as we've known it goodbye: welcome to the Jungle. God Bless Sierra Leone, our forefathers, and all to the Sierra Leone Constitutional Lawyers.