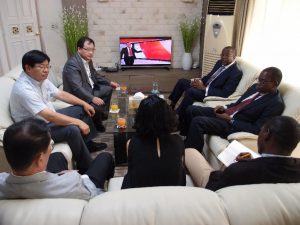 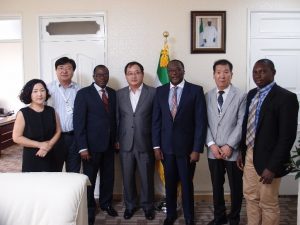 Group Photo featuring H.E. Ambassador Golley and Chairman Ko together with officials of the Sierra Leone mission in Seoul and Younghaw Development Industry LimitedHis Excellency Ambassador Golley warmly welcomed Chairman  Ho to the Mission, and indicated that his Company could play an important role in Sierra Leone's post Ebola recovery efforts, with support for infrastructural construction and energy generation being at the centre of these efforts. The Ambassador further stated that Sierra Leone was now truly open for business to genuine investors, and invited the Group to visit Sierra Leone at the earliest opportunity to familiarise themselves with the favourable investment climate in the country, and engage in discussions with officials in the public and private sectors.

The Chairman, accepting the invitation to visit Sierra Leone in the near future, stated that his Company had already successfully completed various housing and additional infrastructural projects in Africa including Angola and Kenya, and looked forward to assisting in the country's post Ebola national development efforts.