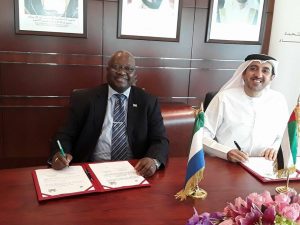 The United Arab Emirates (UAE) and the Republic of Sierra Leone last week signed an Economic and Technical Cooperation Agreement in the commercial Emirati city of Dubai.

The Deputy Minister of Economic and Technical Cooperation, His Excellency, Eng. Mohammed al Shemsi represented the UAE and Sierra Leone’s resident Ambassador in the UAE, His Excellency, Mr. Siray Alpha Timbo signed on behalf of the Government of the Republic of Sierra Leone.

The agreement called for boosting cooperation in the areas of Trade and Investment, Agriculture, Energy and Renewable energy, Mining and Industry, Infrastructure, Construction and Real Estate, Tourism, Telecommunication and Transportation.

Speaking during the ceremony, Eng. Mohammed al Shemsi opined that Sierra Leone has a huge potential for growth and investment and intimated that UAE is looking forward to open its doors to take advantage of those opportunities but with mutual consent. 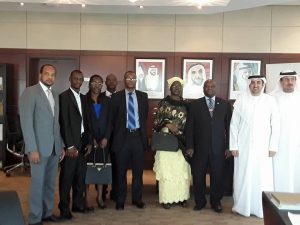 He also stressed the UAE’s commitment to strengthening its international relations network to attract foreign investments and increase the trade intercontinental movement.

The Minister highlighted the importance of both countries’ collaboration in various economic fields and particularly in energy and renewable energy, health, agriculture as well as tourism, adding that, “UAE has an advanced infrastructure which emphasizes the country’s competitiveness level in foreign trade globally.”

He furthered that UAE is focusing on various other vital economic sectors that support its thrust towards building a diversified knowledge – based economy in line with UAE Vision 2021 with emphasis on technology, renewable energy, and small medium –sized enterprises.

The Emirati Minister also reaffirmed his government’s commitment to plan a visit to Sierra Leone and to put mechanisms for action in areas of trade, investment and business. 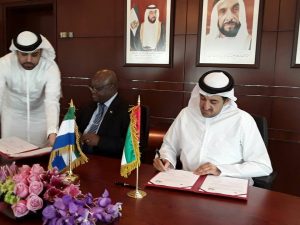 The top Sierra Leone diplomat in the UAE expressed his satisfaction on the excellent bilateral relations between Sierra Leone and the United Arab Emirates, which he said, has spanned for many years.

He commended the UAE for its rapid economic development, excellent trade policy, tourism attractions, peace, stability and security and also hailed the prudent policy adopted by the UAE under the leadership of President Khalifa bin Zayed Al Nahyan. 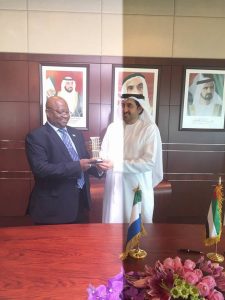 He, therefore, called for the public and private institutions to seize the opportunity and explore the investments opportunities in Sierra Leone. He said: “We look forward to signing more collaborative agreements with the UAE in diverse fields of mutual benefit.”

The Sierra Leone Envoy regretted the economic loss Sierra Leone suffered the last two years due to the insurgence of the Ebola Virus Disease.

The colourful signing ceremony was also attended by senior UAE Government officials and witnessed by the wife of His Excellency the Ambassador, Mrs. Martha Timbo, the Acting Head of Chancery, Mr. Allieu Badarr Mansaray, a cross section of the Staff of the Sierra Leone Embassy in Abu Dhabi, the President of the Sierra Leone Nationals Association in the Emirates (SLNAE), Ibrahim Talleh Bah.