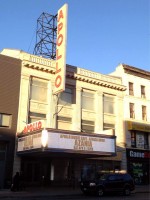 will realize her childhood dreams when she performs at the world famous Apollo Theater’s four-day Africa Now Festival.

"Seeing my name up on the Apollo marquee was literally a dream come true for me. An amazing blessing," Azania told No Questions Asked radio show listeners during last week’s interview broadcasted live on WBAI, 99.5 FM, Pacifica Network Station in New York City.

Azania says she will perform lovely, soulful, jazzy and funky songs from her acclaimed album “Rising” as well as new songs from her next album to be released this year.

"I'm very excited and proud to see Sierra Leonean’s gaining recognition on the music front. Many very talented artists from Sierra Leone deserve more exposure so I am happy we will have three excellent groups representing us at the world renowned Apollo on April 5, 2014.  Come celebrate with us at the Apollo Music Café in Harlem, New York,” Azania said in a statement.