Latest headlines
There has been a nationwide demonstration in the past 48 hours against raping and brutality against women in Sierra Leone, in wake of one the cruellest death of a 17 years old teenager, Hannah Bockarie.   There was a candle light vigil across Lumley beach, a very beautiful tourist resort in western Freetown, which has been hitherto turned into a field of criminality at late hours.   Hannah’s death has sparked outrage in the country and concern about rising crime in the wake of the Ebola epidemic. Dressed in blacks and carrying placards, are women from all sectors of life. There were also some men among the demonstrators.

Hon. Alhaji Moijue Kaikai, the Minister of Social Welfare, Gender and Children’s Affairs is seen displaying placard along with many angry demonstrators against the inhumanly act. But the major questions which every human right and democracy activist would like to have answered are: what is the government doing to stop such act in the future? What has the government ever done to prevent such?

Hannah’s body was recently found on the well-known Lumley Beach. Tests will determine whether she was sexually assaulted, but police and a women’s group say it appears she was. She may

have been beaten to death.

It must be noted that raping was used as one of the most unescapable weapons against women during the past civil war and it is still being used by many men in private homes in Sierra Leone.

The recent incident has even attracted a special press release from the United Nations Office in Sierra Leone:

“Statement from the United Nations Country Team in Sierra Leone over the rape and murder of a young woman at Lumley Beach, Freetown

Freetown, 19 August 2015- The UN Country Team (UNCT) in Sierra Leone is shocked by the report that an 18-year-old girl, Hannah Bockarie, was brutally raped and murdered on 13 August 2015 at Lumley Beach, Freetown. The UNCT condemns this horrendous act in the strongest terms and it calls on the Sierra Leone Government to conduct a prompt, thorough and independent investigation into the girl’s death and to bring the perpetrators of this heinous crime to justice.

The UN Team conveys it heartfelt sympathy to Hannah’s mother and family.

The UN recalls that sexual assault against women, especially gang rape, was rampant during the 1991-2002 civil war in Sierra Leone. The UNCT is also cognizant of the fact that the Government of Sierra Leone passed legislation in 2007 making the sexual abuse of women a criminal act. In addition, it reminds the authorities that Sierra Leone ratified the African Charter on Human and People’s Rights on the Right of Women in Africa, a Charter that requests the state parties to protect women from all forms of violence, particularly sexual and verbal violence:

“States Parties shall adopt and implement appropriate measures to ensure the protection of every woman’s right to respect for her dignity and protection of women from all forms of violence, particularly sexual and verbal violence.” (Article 3/ 4, Protocol to the African Charter on Human and People’s Rights on the Right of Women in Africa).

“Sexual violence in public spaces, like Lumley Beach, is what makes cities across the world unsafe for women and girls,” said David McLachlan-Karr, the UN Resident Coordinator in Sierra Leone. “This horrific and barbaric act is a clear example of the kind of violence against women that limits the ability of women and girls to reach their full potential and exercise their basic human rights”.

The United Nations Country Team is encouraged to note the various actions taken by the women’s movement in the country and pledge the UN’s support to continue to stand by the women of Sierra Leone in the promotion of their social, political and economic rights.

Today the UN calls upon all stakeholders: the Government of Sierra Leone, the police, women’s organizations, men, young people, the media and the private sector to work diligently and speedily in the investigation of this case and to join forces in the fight against impunity for the violence committed too often against women. The UN System calls on the authorities to dedicate more resources to raise public awareness about such crimes and to toughen sanctions against those that commit acts of violence against women and girls.

The Secretary-General has also appointed a Special Representative on Sexual Violence in Conflict, Zainab Hawa Bangura, a national of Sierra Leone and crusader against gender violence around the world.

“Break the silence. When you witness violence against women and girls, do not sit back. Act.” – Ban Ki-moon, United Nations Secretary General. 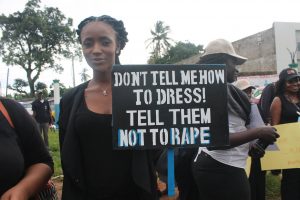 The management of Critique Echo Newspaper would like to seize this opportunity to express a heartfelt condolence and solidarity to the family of Hannah Borckarie, while calling on authorities to do whatever humanly possible to trap down the perpetrator (s). The Critique Echo team believe that sexual and love related activity of any kind (including touch, caress, kiss, romance, sex etc.) which takes place without the due consent of one of the two persons involved should be treated as a rape case, whether they are couple, finances, temporal lovers or customers.