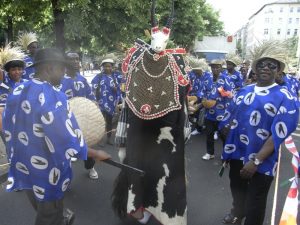 The Freetownean mask devil, Hunting, in action right in the central heart of Europe

Berlin is so much more than just techno and Trabis, bratwurst and bier. Beneath the surface of stereotypes, are diverse cultural practices that rarely appear in the guide books and one of them is the Carnival of Cultures. This Carnival according to history, began in the year1995 and was inspired by the world famous parties in Rio and Notting Hill. Like its older cousins, the event is as much a statement as a celebration, aimed at promoting cultural understanding, tolerance and respect between Germans and foreign immigrants in the country.

Since those difficult days of political and social upheaval for Berlin’s cultural minorities, the carnival has gone from strength to strength. Last year, for the first time, more than seven hundred thousand people attended the party to carouse in the rich diversity and stand up for an emerging multiculturalism that has the power to erase the country from the map of racism.

This year’s carnival took place from Friday 25th to Monday 28th instant, and it drew representation from 70 different nations with approximately 5.400 protagonists and over 1.4 million visitors from the length and breadth of Germany and beyond. The carnival which was graced by Dr. Prof. Maria Böhmer, Commissioner for Migration, Refugees and Integration, and Klaus Wowereit, Governing Mayor of Berlin, was streamlined by the Werkstatt der Kulturen in collaboration with relevant federal departments and the city council of Berlin.

The most exciting part of the carnival is that our beloved Sierra Leone fully participated in it in a grand style.

Well dressed in a traditional costume (Ashobi) tailored by one of the expert tailors at Sanders Street in Freetown, and bamboo hats carefully weaved by the traditional costume weavers in the far interiors of Sierra Leone, were members of the Sierra Leone community in Berlin, including high level intellectuals, in jubilant mood to represent their country at the international festival.  They were led through a five kilometer long street in the central heart of Berlin by the Sierra Leonean traditional mask devil, Hunting. The Hunting attracted thousands of onlookers as it appeared to be the only (true) traditional icon in the stage that had no fake embellishment.  Yes, the Hunting made Sierra Leone envied by many as it danced through the crowd with thousands of European spectators imitating the  beat and rhyme of Sierra Leone’s traditional music.

The carnival ended today with the performance price awarding session which declared Perul as the first winner.  The independent jury assessed three element of presentation by each group: music, costume, individual performance, based on which they decided for Perul.

According to the Chairman, Mr. Mohamed Suma, he is ready to work hands in glove with the main Union since the major objective of every Sierra Leonean organization in the country is to promote the image and interest of Sierra Leone and its people. “What we can’t accept at any rate however” he said, “is the idea of dissolving our club and subdue it to the main body since we are already registered and recognized by the administrate court in Berlin”.

In a brief interview with the newly elected Chairman of the main Union, Mr. Sidikie Coker, he expressed his willingness to recognize the Sierra Sport and Cultural Club e.V. as a sister organization and he is ready to work hands in glove with Mr. Suma to promote Sierra Leone and its interest at any level. “I don’t think it realistic to ask Mr. Suma and colleagues to dissolve their club at this stage after they have gone very far in legalizing themselves”, Mr. Coker stated.

What is clear however, is that albeit Sierra Leone didn’t win the best cultural performance price, but its citizens all over the country were happy to see their culture and tradition being openly displayed at international level.

Here is pictorial review of the Sierra Leonean performance at the carnival: