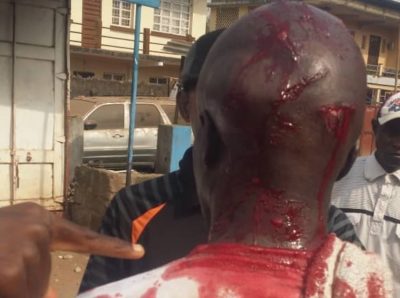 “Event: Reports indicate there are currently violent confrontations between APC and SLPP supporters near APC headquarters in Brookfields. U.S. government personnel are advised to avoid the area today. Additionally, there is an increased amount of police in the area tasked with maintaining order. Expect the increased personnel and confrontations to congest traffic in central Freetown. Exercise extreme caution in the Brookfields area.

The above was a statement issued by the U.S Embassy (sierraleonetelegraph.com 14/01/2020), following the violence that broke out between rival supporters of the SLPP and APC parties. It’s ironically sad that this is coming barely a week after the nation commemorated January 6th; a date that will forever leave an unenviable and indelible mark, not only on our history but our collective conscience. Last week, we listened to litanies of eulogies, as victims and witnesses recalled their horrible experiences. As a mark of respect to the dead, Sierra Leoneans all over were united in the “NEVER AGAIN” pledge. Perhaps we should change that to “SIERRA LEONE WILL NEVER LEARN”; thanks to our 2 political parties which are competing to prove that our country needs adult supervision.  So we don’t even need to ask who started it all. The answer is always the same; accusations versus counter accusations, the kind you get in a playground for kindergartens.

There is this notion that having failed to win the 2018 general elections, the APC is doing its best to make the country ungovernable under the SLPP. On the other hand, the APC side maintains that the SLPP is on a mission of vengeance to politically decapitate (pardon the pun) the APC. So are we in danger of being trapped in the throes of “Sierra Leoneans outside looking from APC to SLPP, and from SLPP to APC, and from APC to SLPP again; but still find it impossible to say which is which? Some will see the current economic climate as a tinderbox, contributing as part of the backdrop to the level of intolerance that is becoming a regular feature in our society. That should not be a carte blanche for the festivals of violence that occur on a regular basis. No one is accusing Sierra Leone of inventing riots, violence or protests. These are a world wide. But the regularity of violence between so called supporters of these 2 parties is fast becoming a past time for some, and an occupational hazard for others. The high levels of unemployment could be a causal factor, but should not been seen as a substitute or answer to our problems.

The cost of violence in our country is not measured only by the severity of injuries, loss of lives or damage to property; just as the pursuit of truth does not permit violence on one’s opponent. The cost of these riots goes beyond the physical impacts it has on the gladiators. Violence in our country affects every Komba, Minkailu, Kinnie, Sallay or Mariatu in Gbonkolenken, Potoru, Gbankaya or koindu. It costs loads of lost revenue when our country is labelled as unstable. When a foreign government issues a travel advice against travelling to a particular country to its citizens, it wipes out millions of potential investments and tourist/visitor dollars from our national cash register. The latest US Embassy update on the situation in just Brookfields area is enough to generate a sense of instability in the country to foreign investors.

Sierra Leone played host to Idris Elba last year;  all aimed at rebranding Sierra Leone, putting the country on the map and to attract foreign visitors and the like. Now you tell me about how you would be feeling today, if you were a foreign visitor or investor planning to come to Sierra Leone?  What would be the cost of that decision not to come or delay that investment; thanks to the level of violence in the country? You do the math. How do we expect to attract foreign visitors and investors when we cannot guarantee a peaceful and stable country? Why do you think countries like the Gambia have a thriving tourist industry, when we have more expansive, more beautiful and unadulterated beaches? The irony is that while people like Idris Elba, the President and other Sierra Leoneans are busy promoting the country, these groups are busy providing the perfect excuse not to visit.

When countries give travel advice against unstable countries, they never go back to say that all is well, even after the dust would have settled. The image of instability will therefore continue to linger on the minds of these visitors and investors. And for every passing day, that investment or dollar that should have been spent buying Soriba’s craft, or paying for the hotel taxi is lost. Liberia and Sierra Leone are relatively equidistant from anywhere in the world.  But why does it cost almost twice to freight goods and items to Sierra Leone than Liberia or Guinea? Why are the ticket fares for these neighbouring countries so different? Some may want to say that the country is in a high tax bracket. But that is not the reason or only reason.

During the war, Sierra Leone was rated as one of the countries with the highest risks to travel to, live or invest in. The risk rating remains the same even though the guns fell silent 2 decades ago.  Countries are generally credit rated and risk assessed against the following:  sovereign, currency, banking sector, political, economic and country risks. According to the Economic Intelligence Unit Credit rating agency (December 2017), Sierra Leone was rated as CCC for sovereign, banking, political and country; and B and CC for currency and economic risks respectively.  That was in 2017. What should it be today? I won’t tell you because it looks like our country is not even worth risk rating. Please help me here with the research.

During this period, our sovereign risk at CCC was a representation of economic mismanagement, wide fiscal and current-account deficits, weak foreign-exchange reserves and high external debt at 42.5% of GDP. Our banking sector had a weak asset quality, with non-performing loans worth over 30% of total loans. Our two state-owned banks were in precarious financial positions that required forced restructuring exercises. The foreign exchange reserve was equivalent to barely 2 months of imports, and so the Central Bank could not defend against sharp currency fluctuations. Even when the government had a legislative majority, the popular resentment that was centred on corruption, repression, the lifting of consumer subsides and inadequate provision of basic amenities raised the bar on political risk. As a result of the Ebola crisis, the disruption of the iron ore production led to rising debts; leaving the country more reliant on donor support to finance our fiscal and current account deficits; and exposing the country to external financial shocks.

These are some of the risks associated with countries deemed as unstable. The few investors who venture to take such risks therefore insulate their businesses with premium insurance. That is one reason why ocean going vessels docking on our shores are heavily insured with high premiums against these risks. High insurance means high costs; and who bears the brunt of those costs?; you, me, Morlai, Sahr, Thomas, Saffa Korthor Sorie, Ngor Mannah,  and everyone. Watch how the prices of goods are threatening our very existence these days.  And then we wonder why “De grun dry”, “We wae dae suffer, Na we boku”, and “de game don big”? No one is suggesting that this is the only reason for our apparent economic paralysis; it is one of the insidious factors always creeping up on us. Our country is still rated at war zone risk by many companies and countries. So how can we shed that when we still engage in acts of re-runs or test drives of the war?

As for those who feel that their tribal affiliations are the only requirements to qualify for violence, please tell the world  when was the last time you saw Maada Bio’s brother, Samura Kamara’s cousin, Yumkella’s brother in law or Sam Sumanas’s son in your “geng” of rioters.  Some “People sleep peaceably in their beds at night only because rough men stand ready to do violence on their behalf.” (Orwell). The next time you pick up a stone, a machete, a bottle or “rubberfak”, just ask for the family members or relatives of our political leaders to throw the first stone. That is when you realise how it feels to be a majority minority.  If we are to shake hands with visitors and investors, we cannot do so with clenched fists.