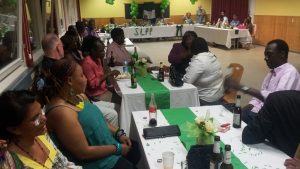 The Germany chapter of the main Sierra Leonean opposition, the Sierra Leone Peoples Party (SLPP), organized a fundraising party over the weekend in a grand style.  The party which attracted participants from the length and breadth of Germany, was hosted in the German Federal capital of Berlin. Some of the party stalwarts present included the chapter chairman, Dr. Musa Ben Sannoh.

While the party was booming, the Editor of Critique Echo, Othman Sheriff (CEN) caught up outside the party hall with Dr. Musa Ben Sannoh (MBS) who spearheaded the program, and had with him a brief interview about the event and the SLPP Germany chapter in general.  The interview went on as follows:

CEN: Dr. Sannoh, can you please spare Critique Echo a moment? I have some questions which I would like answered for the interest of our readers.

MBS:  Sure. You are welcome my friend. I view talking to the Critique Echo, a reputable newspaper as a lone opportunity, so let me make use of it.

CEN: Dr. Sannoh, how can you describe your mood tonight with regards to the turn up of this event? Is it up to your expectation?

MBS:  Fantastic, in fact I'm overwhelmed. You see when a thing like this happens in Berlin for the first time, you have every reason to be glad. Berlin is the capital city of Germany, and like a capital city, things are a little different here. Sierra Leoneans in Berlin are generally disinclined towards anything political; they have lost faith in politics. We have however, incessantly opined that one has to be part of that which is prepared and able to positively impact on progress at all levels in Sierra Leone, which is the SLPP. Finally, we have been able to make a breakthrough and I'm amazed by the turn-out. It's history and this is why I'm a happy man tonight.

CEN: since the year 2007 when your party lost power to the ruling APC led by President Ernest Bai Koroma, apart from the teleconference you conducted prior to this event, this is the first time I have seen the SLPP converging together in Germany. May I say you have been in total disarray over the years?

MBS: The result of the 2007 presidential election that brought President Koroma to power in Sierra Leone could at best be described as a slap in the face of democracy and democratically minded Sierra Leoneans. It was an insult on the franchise rights of voters whose opinion were promiscuously trampled upon. The results were manipulated by the Chief Electoral Commissioner, Christiana Thorpe, amidst protests from fellow electoral staff, and unfortunately with the backing of the international community like it was exposed latter, in favor of the opposition APC party. The SLPP conceded to that result after observing that the menace of violence was very present. If we rejected the results, another arm conflict was bound to break out. Now tell me, if you brokered peace and stability like we did, will you be enthusiastic to see that peace disappear into thin air and be replaced with another political upheaval? You see, if you are SLPP, you will relent because you will always place peace first. So we let it be, not out of cowardice, but out of love for the country. The SLPP stands for peace and democracy.

Coming back to your question, NO, the result of the 2007 presidential election hadn't thrown us into disarray. On the contrary, it has cemented the SLPP together, neglecting the opportunists of late. In Germany, we have held meetings severally since that time, both physically and on the telephone, the conference you spoke about. The physical meetings have been concentrated mainly in the West of Germany where the party had its headquarters.

CEN: where is the SLPP currently headquartered in Germany?

MBS:  Dortmund, in the state of North Rhein Westphalia. The SLPP Germany is registered in Dortmund with the courts, which makes us a legal entity in Germany, for which we are proud.

CEN: how does the current SLPP executive looks like in Germany? Who are the members, who is holding what position, where do they live?

MBS: The SLPP Executive in Germany comprises people who are prepared to see Rtd. Brig. Jeneral Maada Bio and Dr. Kadie Sesay walk right up the stairs of State House in November this year. Our executive members live at various places throughout Germany including the city of Berlin.

CEN: you will agree with me that the success of every opposition group depends on membership commitment and cooperation, how committed or cooperative are your executive members?

MBS: Like I have indicated already, the SLPP Germany is committed to purpose. Our only limitation is the advantage of the numerical strength which we presently do not enjoy. We are however strategizing to make our membership robust, albeit difficulties.

CEN:  I could see you collecting gate fees and selling drinks and foods to your guest, what are you going to do with the money?

MBS:  You know, November 17 will be a historic day for us, for S/Leone. It will be the day when we will occupy state house after the voters have given us the mandate to do. Our bounding duty now is to help the National SLPP, under the leadership of strongman John O. Benjamin to have our charismatic presidential candidate; Rtd. Brig. Jeneral Maada Bio and his running mate the indomitable Dr. Kadie Sesay occupy State House coming November. We will do that physically, morally and financially. That's why we are here to source funds.

CEN: I meant to understand that you visited Sierra Leone recently, how can you assess President Koroma’s “Agenda for Change”?

MBS:  Oh God! "Agenda for Change" Which change? Change for the worst? To my mind that slogan is as hopeless as what is it supposed to convey. If you mean that the Agenda for Change has something to do with changing (filling) the pockets of the APC party functionaries using tax payers money, then let me agree with you, because that's exactly what that agenda does successfully. In other words, The APC's agenda for change has actually changed that country to beyond horrendous standards. In my country today under the APC party, life has become a daily and bitter struggle for the majority. Many people don't live any more, they only exist. I saw poverty, hunger, starvation and death all over the place during my short sojourn in Sierra Leone. The prices of basic commodities such as rice skyrocket on a daily basis, making it unaffordable to the man on the street. In Sierra Leone now under the APC government, the common man has no more importance than to contribute to some strange statistics. Too sad, too bad. Another change that amazed me was that many Sierra Leoneans have metamorphosed into law makers. People do things the way it suits them and nobody cared, not even a bit. It seemed to me that there wasn't law and order anymore; it seemed to me that there wasn't anyone in control. That's about the change in the APC's "Agenda for change". The good thing though, is that the Sierra Leoneans will reject that APC kind of a change on November 17. I'm pretty sure about that.

CEN:  APC and SLPP are usually described by many as tribal groupings. So what inspires you to remain committed to the SLPP regardless the fact that it’s in the opposition? Is it because you are a Mende man from the eastern part of Sierra Leone?

MBS:  Well, the difference is that the SLPP refers to the APC as a political party, a group of people with a different political ideology. On the other hand, the APC refers to the SLPP as a tribal organization for the south-easterners, possibly for want of better arguments. It is unlike the SLPP to refer to other political parties as tribal associations. We have better and convincing arguments. We therefore don't garner support by cheap means; we simply deliver like we did the last time we were in power.

CEN: how optimistic are you about come November 17?

MBS: You see everywhere in the country today, people complain about that hardships, the sufferings and meaninglessness of life. Those bitter complaints cannot be underscored the more. Funnily, The APC government always provides lame excuses such as the global economic downturn and all the lot. But you see people aren't stupid. And after they have been exposed to those unparalleled sufferings, you have to be a hardened fool to believe that they won't change the prospect of their lives on November 17, 2012, by voting SLPP massively.

CEN: Dr. Sannoh, thank you very much for this session

MBS:  You are always welcome. Thank you.